The main suspect in the murder of a family of 4, including two babies, in Andravida was arrested late on Friday evening, and confessed to the murder on Saturday.

The 60-year-old homeowner reportedly shot and killed parents and strangled young children for “non-payment of rent,” he claimed. However, the police are also investigating a racist motive, as the man repeatedly made racist statements. “They didn’t pay rent,” the man allegedly said in a local police report on Saturday afternoon.

The bodies of a 32-year-old Albanian father, a 37-year-old Romanian mother, and their two children, aged 1 and 2, were discovered by the family’s third child, the mother’s 10-year-old son from a previous marriage, on Wednesday evening.

According to the local patrisnews edition, an autopsy showed that the woman was killed by one bullet in the head, the father by two from a pistol. Children are killed by strangulation when the perpetrator covered their mouth and nose.

He was still in the house when a 10-year-old boy appeared and saw a terrible sight. The intruder hurriedly left the house, going out again through the yard, and then fled the scene of the murder and left the city.

The police located the criminal and his car in the Ilya area on Friday and launched a large-scale operation to apprehend him. The police pursued the car and detained it in the city of Patras, in the northwest of the Peloponnese.

Based on an inspection of the crime scene, the parents’ bodies were found placed on a trailer, indicating that the killer had tried to transport them and hide them somewhere in the countryside. However, for some reason, he abandoned his plan and fled.

The media reported that on Sunday morning this man had a hearing with the prosecutor of Andravidaon.

Neighbors told local media that the family had lived in the house for the past two years. Father, a citizen of Albania, worked as a day laborer on a farm. The family was struggling financially but took good care of their children and dog.

Local residents told the media that the owner of the house loved weapons and knew how to handle them. As a teenager, he shot a classmate in the leg when he was 15 years old. Others said he was known in the area for cruelty to animals, his victims included stray dogs and cats, as well as his neighbors’ farm animals. 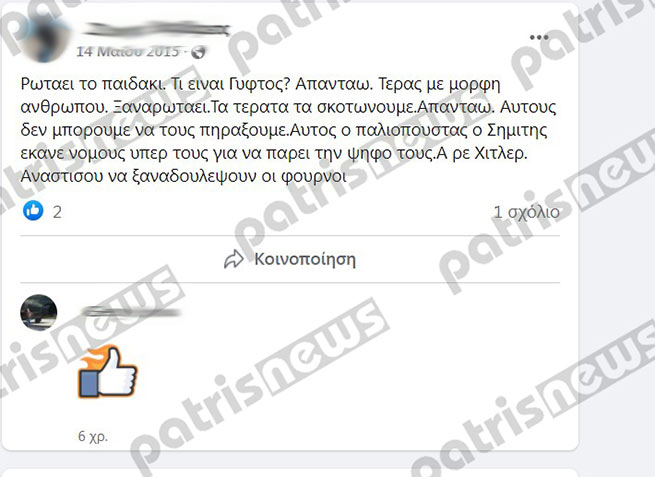 He’s writing: “The child asks: What is Giftos (gypsies)? I answer: A monster in human form. He asks again: Kill monsters. I answer: We cannot harm them. That f*** Simitis legislated in his favor to get their votes. Hey Hitler! Resurrect the stoves so they work again.” 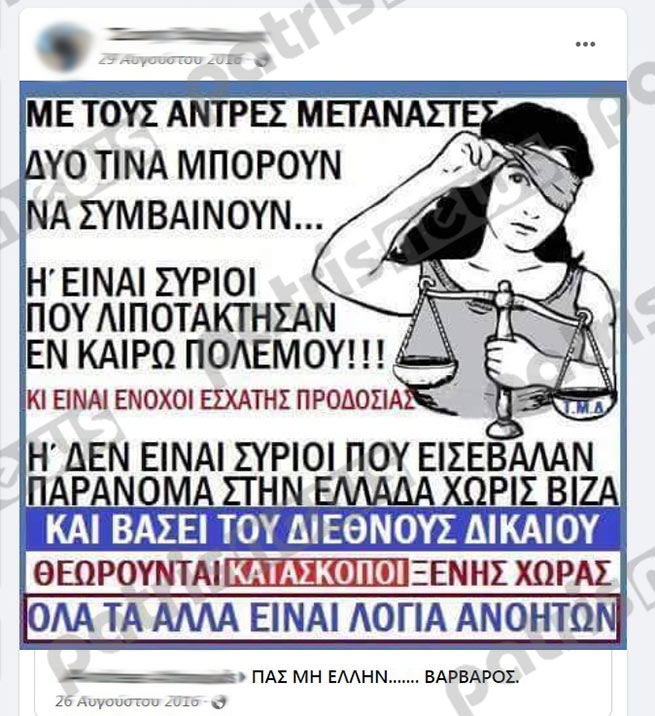 In another post, he refers to Syrian immigrants, whom he characterizes as deserters because they left the country in the midst of a war, and also calls them spies!

patrisnews reports that the authorities are also investigating the racist motives of the quadruple murder by the arrested landlord, as he often lashed out at foreigners and Roma, and even glorified Nazi crimes in Germany during World War II on his social media accounts.