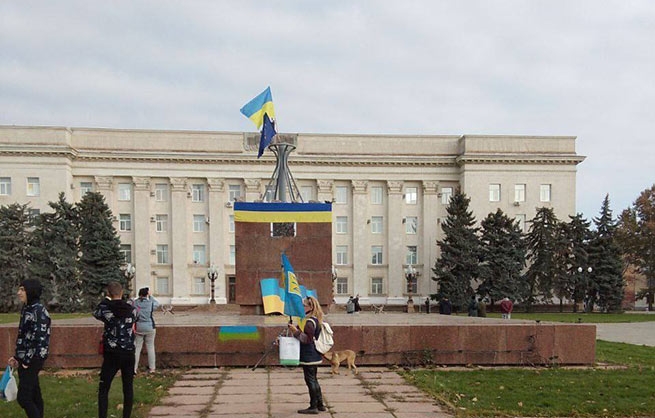 Photos shared on social media show the Ukrainian flag being hoisted on the Kherson city administration building. Russian troops were withdrawn to the right bank of the Dnieper after the destruction of the Antonovsky bridge.

The flag, located in the center of Kherson, was estimated to have been hoisted at night, possibly by local activists active in the city, as residents mostly stayed at home. According to Russian reports, Ukrainian troops entered the city.

The Antonovsky bridge and the pontoon bridge are gone. Russians seem to have “ended” their withdrawal in that sector. Whoever didn’t flee until now is now stuck, though I suspect that most Russian troops are gone. #Kherson #Ukraine pic.twitter.com/REQHhtF4ea

A few hours ago, the Antonovsky bridge across the Dnieper was blown up.

A pontoon bridge was also destroyed, which served to cross the Dnieper, since the Antonovsky bridge had significant damage due to shelling with rockets from Haymars. It is not yet known by whom and how the Antonovsky Bridge was blown up, and the damage to the structure has yet to be determined. A blown one of its legs would render it unusable for years to come.

Another photo from Antonovsky Bridge pic.twitter.com/ollKRH2Qbl

Russian sources report that both road and rail links were “permanently interrupted”. The Russians strategically believe that the Dnieper, with proper fortifications along its entire length, could be an impenetrable border that Moscow could easily maintain for decades.

This is how the front line near Kherson looks like at the moment.

Moscow believes that for several months now they have been fighting not against Ukrainians, but against 40 Western countries, which generously send weapons systems to Kyiv, and the constant grinding of the Armed Forces of Ukraine in battles suggests that they will end sooner or later.

General Surovikin believes that Western mercenaries (former / current military in fact) participate on the Ukrainian front in many tens of thousands, so the battle for the Russians was numerically unequal due to the length of the fronts (however, the Russian side still has no evidence of this fact provided). So he decided, at least for the winter, to pursue a much more conservative policy. After all, he himself said that the main Russian virtue is “patience” (which, however, has become a proverb).

At 5 am Moscow time, the transfer of Russian troops to the left bank of the Dnieper was completed. Writes about it RIA News” with reference to the statement of the Ministry of Defense of the Russian Federation.

According to some Ukrainian and Russian TG channels, the surrender of Kherson is “another fact of the Big Deal. In fact, we are watching Slovyansk in 2014, writes channel Gossip Girl. “When the Russian group calmly retreats and withdraws all equipment and personnel without loss! This is impossible without coordination with the West, which means that this was Sullivan’s demand, voiced in Kyiv to Zelensky! According to estimates of Ukrainian intelligence, there were 50-60 thousand soldiers on the right bank of the Dnieper and 2000 thousand units of heavy equipment. At the same time, the Russians once again threw a lot of military equipment and ammunition, which from the Ukrainian side has already received the name “Russian lend-lease.”

According to Ukrainian blogger A. Shariy, the initiator of the “Big Deal” was Turkey, on which Russia is now very dependent.