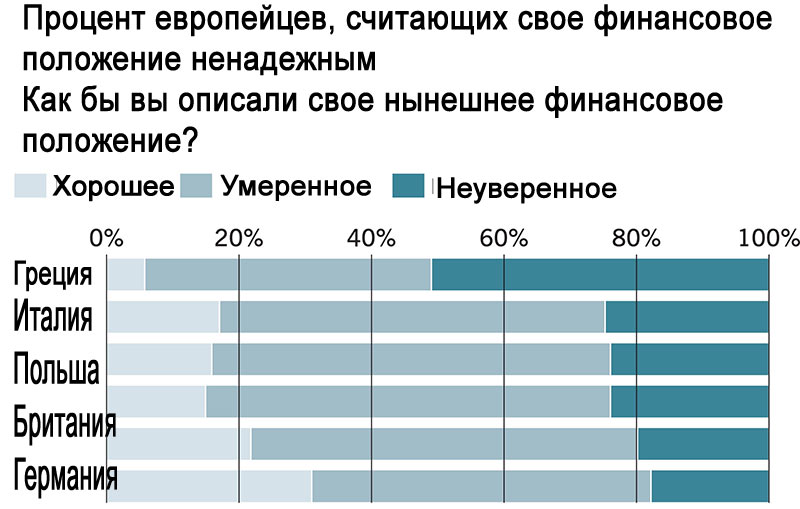 Italians and Greeks are the sharpest in assessing the situation: 70% and 68%, respectively, say they are “worried” or “very worried.”

One in four Europeans describe their financial situation as precarious. At the same time, 80% of residents of six European countries, including Greece, have already sharply reduced their spending. A survey by French humanitarian organization Secours Populaire and research firm Ipsos shows that no All European countries were equally affected: 25% of Poles reported that their purchasing power had increased. At the opposite end of this optimism are the Greeks, 68% of whom report a significant loss in purchasing power.

The cost-of-living crisis fueled by high energy prices, persistent inflation and war in Ukraine shows that “the continent is on the brink,” the organization said. 63% of the French say their purchasing power has declined “a little” or “very little” since 2019, as do 57% of Italians, 54% of Germans, 48% of Britons and 38% of Poles.

Sixty-four percent of citizens in the six bloc countries surveyed said they “often” or “sometimes” can’t decide which spending to cut. And if 28% said they exceed the withdrawal limit from their bank account as early as the second week of each month, then 27% are worried that they might be on the street. On average across the six countries, 27% of respondents described their financial situation as “shaky”, interpreting the term as “the ability to turn completely on its head due to small unexpected expenses.” 55% said they had to “beware”.

Most Europeans do not seem optimistic about the future: 55% of respondents said they were at a “great” or “increased” risk of financial problems, while 17% of them rated this probability as “very high”.

Italians and Greeks are the most blunt, with 70% and 68% respectively saying they are “worried” or “very worried”. 47% of respondents in the UK and 42% in France reported a “significant” risk of financial distress.

Parents face the biggest pressure in six European countries. 72% of them reported that they kept spending on personal entertainment, body and hair care, and clothing to a minimum so as not to affect the quality of life of their children. Nearly half (48%) of parents said they regularly cut back on their food purchases in order to feed their children well. 66% admit that they have had to limit their children’s activities, such as travel and vacations, due to a limited family budget. 49% of parents express concern that in the future they will not be able to provide for the needs of their children.

The study found that German pensioners (61%), young people in Italy (57%) and single-parent families in the UK (55%) are most likely to experience the specter of poverty.