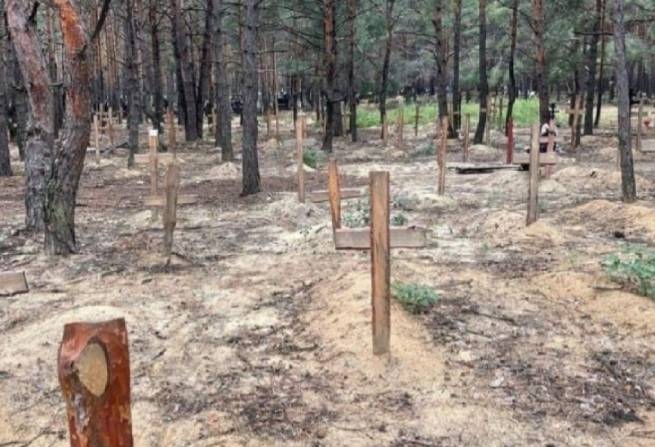 When examining the surroundings of Izyum, liberated by the Ukrainian army, numerous burial places of dead local residents were found.

According to air force, this was told by Sergey Bolvinov, head of the investigative department of the police of the Kharkiv region, and Oleg Kotenko, commissioner for missing persons. Bolvinov claims that among the dead there are both Ukrainian military and civilians who died for various reasons: from shelling, explosions, some were shot, writes BB.LV.

Kotenko explains that the Russian military had previously filmed the burials, so after the liberation, the Ukrainians already knew where to look. He says:

“Somewhere there is a register in which, I think, they will tell us where they took this body for burial. We are working on this now, and I think that we will find these lists, and we will understand that this is the kind of person why he was assigned a number and not a surname.”

“The exhumation of the bodies of the dead from the mass grave site in Izyum continues. During this time, 146 bodies have been exhumed, most of which are civilians, including 2 children. Some of the dead have signs of violent death, there are bodies with their hands tied and signs of torture. The deceased were also found to have mine-explosive injuries, shrapnel and stab wounds.”

Sinegubov noted: all bodies are sent for a forensic medical examination to finally determine the cause of death. He is convinced that the whole world should know about the terrible crimes of the Russian invaders in the Kharkiv region and assures that the evidence collected will certainly be used in international courts to punish war criminals.

The head of the IVA thanked prosecutors, police officers, SBU specialists, employees of the State Emergency Service, forensic experts, doctors and everyone involved in the exhumation, as well as representatives of the media for their hard work.

Meanwhile, Ukrainian Ambassador to Austria Vasily Khiminets was outraged by a report about Izyum, aired on the Austrian TV channel ORF about mass graves. In a series of Twitter posts, he wrote:

“Irritating and disturbing: a report about Izyum on ZIB2. The world is shocked by the grave crimes of the Russian army that were revealed in Izium. And only ORF doubts. Hundreds of civilians, including entire families: killed and maimed. Many were tortured before, some were thrown into mass graves with their hands tied behind their backs.Many Russian dungeons uncovered…Facts that shock the world, but are belittled by an ORF correspondent.What is the reason for such relativistic journalism?What is the purpose?It’s like mocking the victims.Insulting all the dead.Shameful for ZIB2 and ORF”.

Dieter Bornemann, head of the editorial board of the ORF television channel, responded to the accusations, sending an official response to the ambassador:

“Dear Mr. Ambassador, On September 16, 2022, ORF in their TV news ZiB1 and ZiB2 actively reported on the mass graves found near Izyum in Ukraine, followed by one live conversation with our correspondent Christian Verschütz. Among other things, this concerns the fact that the investigation of these possible war crimes is ongoing.A significant reason was the statements of the head of the investigative department of the GUNP in Kharkiv, Sergei Bolovinov, who noted that these investigations could still continue and this is a matter of forensic medical examination.

ZiB1 quoted the head of the investigation department as saying: “Many people died as a result of shelling, many people were killed, and there is information that people were also tortured before they died. For example, the first body we seized has marks and a rope around its neck , that is, there is reason to believe that the person was strangled.

In ZiB2, Sergey Bolovinov was quoted as saying: “However, given that the bodies have been buried since March, their condition may not be very good and therefore it will take more time, but this is a question for the experts who will conduct forensic examinations.”

“Our correspondent Christian Verschütz specifically referred to these statements in his live broadcast,” the Austrian TV channel said in a letter. The head of the editorial board declares that he denies the accusations of the ambassador:

“At the time the program went on the air, according to the Ukrainian investigative department, which is the most important thing in this case, according to Sergey Bolovinov, the circumstances have not been finally clarified, and this is precisely what was reported in our stories. Truthful reports are distinguished by the fact that they are assigned to the best available sources – in this case the head of the investigative department – and he clearly states this. Thus, the accusations of denying war crimes (also repeatedly called such) are not proven. Thus, the assumption of “relativistic journalism” is inappropriate. Especially given the depiction of corpses in reports and clear statements on the air like this: “Many died from shelling, many killed. There is information that people were tortured before they died. The first body we dug up showed marks on the neck, indicating that the man had been strangled.”

“Critical journalism is one of the Western values ​​of democracy, based on facts, and not in the service of propaganda from any side. There is a real danger that, due to unfounded accusations against our colleagues during the active phase of the war, work, and at worst even our correspondent’s health may be at risk, so we urge you to correct the statements made and refrain from unjustified attacks on our correspondent and ORF reporting.”