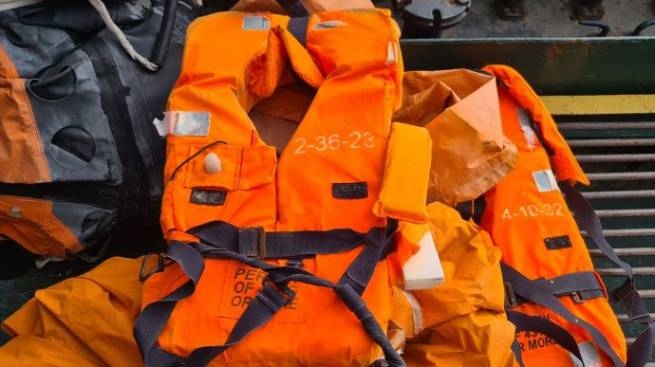 A merchant ship found in the Black Sea a damaged life raft for 20 people from the sunken Russian cruiser Moskva, personal belongings were preserved on it.

Representatives were called to the scene State Border Service. The agency’s statement says:

“The floating craft, which kept on the surface of the water only because it was tied to several life jackets, was found in the Black Sea. The raft had a broken, corrosion-damaged oar, air cylinders. A waterproof bag was also found there, in which there were Russian coins , elements of the uniforms of sailors and marines. Vests and uniforms have combat numbers.”

Pointing to the negligence of the Russian military leadership, the message of the State Border Service also notes:

“It seems that the raft was out of order, and those who tried to escape on it resorted to desperate steps. Obviously, in order to keep the leaky watercraft on the water, the Russian sailors took off their life jackets (which is strictly prohibited) and attached them to the raft to keep it buoyant” .

How reported our publication earlier, the United States helped to sink the Moskva missile cruiser, The New York Times wrote, citing officials. And their colleagues from The Washington Post stated that with the help of American intelligence, several high-ranking Russian military men were killed. The Americans provided intelligence that helped Ukrainian forces locate and strike the flagship of the Russian Black Sea Fleet. The United States provided assistance in aiming at the target, clarifies The New York Times. According to some sources of the publication, American intelligence only confirmed the information that Ukraine already had. But other interlocutors told the NYT that the US’s role in the sinking was crucial.