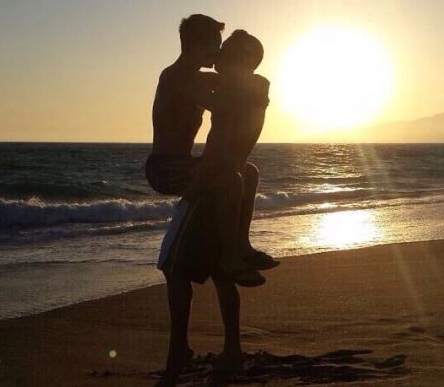 A gay couple has filed a discrimination complaint claiming they experienced “unacceptable, homophobic treatment” at a beach bar in Mykoniatika, Nea Kallikratia, Halkidiki.

The incident, according to the complaint, took place on 21 August. “Obviously, as a couple, we enjoyed the sea, having intimate moments together, like many heterosexual couples around us,” they state in their complaint. (Probably caressed each other and kissed – author’s note).

However, after several hours at the beach bar, at one point while they were at sea, the lovers realized that the man was insistently calling them in an “aggressive tone” to get out of the water to talk to them.

“We immediately suspected that we might be dealing with homophobic behavior, so at first we refused. Seeing that he continues to “aggress”, we decided to go out and ask what exactly he wants from us. On the beach, with other bathers-clients (visitors of the beach bar), he refused to speak and demanded to follow him “aside”.

It goes without saying that we did not agree to isolation with a stranger and told him that whatever he wants to tell us, he must say directly, because we have nothing to hide or apologize. Therefore, we invited him to explain what was wrong, ”the couple describes.

Then the man told them that he was the owner of the store and “ordered us to pack up (leave) because there are small children and families around.” He also claimed that complaints about our tender moments (hugs and kisses) came from at least 10 visitors, which we cannot personally confirm, since for all these hours we were on the beach no other person openly expressed any dissatisfaction with us“.

When the couple asked the obvious question why the heterosexual couples around them who were doing the same thing weren’t getting the same treatment, a second man appeared.

“This man, whom we might call ‘smug’ and absolutely unwilling to let us defend ourselves, claimed that is a member of the Coast Guard. And he told us that our actions constituted an “insult to public morals” and that he could arrest us “if we don’t get out of here,” the text of the gay couple’s complaint says.

Thus, the guys nevertheless decided to leave the institution: “Because we felt that our naturalness and safety were now threatened. Especially when the two self-styled guarantors of “order and morality” moved away, but continued to stare at us, talking on their phones, so we felt especially insecure about what might await us beyond the beach.

During this scene, according to the applicants, those around were silent. But after “two women approached us and expressed their support and solidarity, as well as their dissatisfaction with the actions of the official authorities because of the incident. We thank them for this.”

The couple notes that they decided to share the incident “because we would not want any other person, couple, etc. to be subjected to such humiliation and discrimination. You need to know which areas are safe and which are not for everyone. You should be concerned about whether the local police authorities, who in this particular case are represented by the ostensible “port officer”, ensure equality for all citizens and not interpret the law “at their own discretion” in accordance with their personal or financial sympathies.