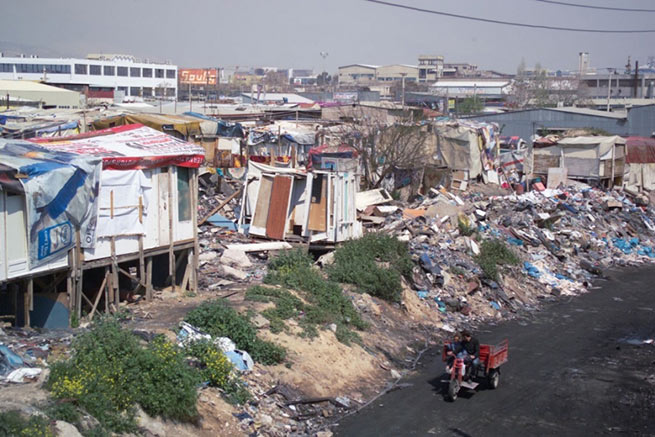 Twenty-five houses and shacks where the gypsy camp lived were demolished by the local authorities in Doxato (Drama). The Panhellenic Confederation of Greek Gypsies condemned this decision.

These actions are not part of any plan for the legal resettlement of the Roma families living in the area, who were not informed by any competent authority about the demolition and are currently in a completely distressed situation, the confederation stressed in a Facebook post on November 22.

“In the past few hours, an unacceptable demolition of 25 houses and shelters of our compatriot Roma in the Doxato of the Drama Regional Unit has become known via the Internet. This action is not part of any plan for the legal relocation of families living in the area who have not been informed no competent authority about the demolition and are currently in an absolutely dangerous situation.
As the Panhellenic Confederation of Greek Gypsies “ELLAN PACE”, we collect all necessary data and reserve the right to exercise all legal rights. Although the matter is still under investigation, we cannot but condemn this action, which seems to have been carried out by the municipality of Doxato. The demolition of camps and the resettlement of people living in inhuman conditions, without sewerage, without access to drinking water, without electricity, have the sole purpose of improving the living standards of this population and are carried out after planning and cooperation of the competent authorities and institutions.
In the case of the recent demolitions in Doxato, none of the above was observed. Solving the housing problem affecting the residents of the area is an urgent need and cannot be delayed. With regard to non-compliance with legal procedures, they are the responsibility of the competent authorities, which will be called to account.
Finally, for the avoidance of misunderstanding, the Vice-President of the Eastern Macedonia and Thrace region on the board of the Panhellenic Confederation of Greek Gypsies “ELLAN PACE” is Mr. Elias Simeon, who represents her in the demolition of 25 houses and shacks in the Doxato area.”

It is worth noting that such buildings, reminiscent of the famous cans, are sad attributes of modern Greece. Located on the outskirts of large cities and inhabited by gypsies, these slums are breeding grounds for rats, parasites and infectious diseases. Numerous attempts by the Greek authorities, abundantly “flavored” with funding from the European Union, helped to persuade part of the Roma people to a settled way of life, but many gypsies do not like this life, so camps roam around cities and villages, periodically stopping and building similar villages.

Naturally, the locals are not happy with such a pleasant neighborhood. Moreover, in addition to begging and drug trafficking, the gypsies are actively engaged in theft and robbery, driving the neighbors around them to rage, and sometimes to death.

You can read about gypsies in Greece in our publications: Greek gypsies and A Brief History of Roma in Greece