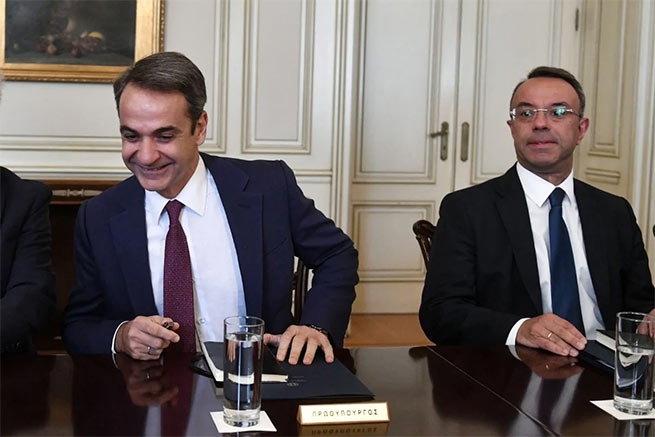 Today the government is holding a cabinet meeting. Government officials will try to find a solution to the “hot” problem of “red” mortgages and the already set fire “bomb” of auctions in the very near future in order to change the situation in society.

The auctioning and forced eviction of former journalist Ioanna Colova, in connection with the Patsis case, puts the government in charge as anger rises over higher interest rates. At the same time, MPs are conveying to the upper echelons the extreme discontent they receive from voters who fear that they will not be able to withstand the constant increase in interest rates.

During a press conference given by Kyriakos Mitsotakis in Patras, the prime minister spoke for the first time about the solution Maximou is working on with the Ministry of Finance on the delicate issue of red mortgages, without any manipulation. In particular, he said: “Since we are really now facing the problem of increasing borrowing costs, I asked the Ministry of Finance to look at all the possibilities for regular borrowers, to see what we can do on this issue, in consultation with banks.”

What will the new program bring? Bank sources say a number of alternative scenarios are being explored at an early stage and initial discussions have taken place in the background. One scenario is to subsidize part of the interest rate to the government so that part of the increase is removed. According to the information, the state spread subsidy, that is, the limit that banks set in addition to the 3-month Euribor, is on the table. It is expected that the program, based on the same sources, will operate from the beginning of 2023, when the “effect” of the interest rate increase will be transferred to the amount of the monthly installment.

In essence, the new program will not differ from the Bridge (Γέφηρα) support programs implemented during the pandemic. At that time, their structure depended on the government subsidizing the monthly payment on a tiered basis, rewarding regular borrowers.

Financial circles opposed the subsidy scenarios. And this, as the same sources explain, is because such a program will greatly burden the budget, especially at a time when the situation in the economy looks extremely difficult (despite the victorious reports of the government and ELSTAT), and no one can predict with certainty what developments will be energy developments after the G-7 imposes caps on Russian gas prices.

According to the same sources, an additional reason why a Bridge-type initiative would have a negative impact on the situation is that it should actually include about 70,000 loans made by the inhabitants of Greece in Swiss francs.

Given all of the above, it is likely that the government will seek to negotiate with the management of systemically important banks in order to find a solution for borrowers, which, however, will have nothing to do with state assistance in repaying their loans.