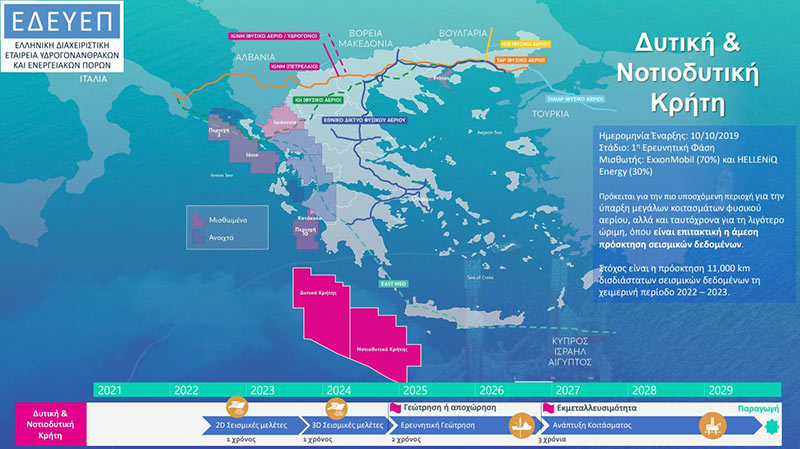 In the next few days, ExxonMobil will begin seismic surveys of natural gas fields in Greece, Prime Minister Kyriakos Mitsotakis said in an interview with ANT1 on Monday evening.

The Prime Minister said, “We can inform you that seismic surveys for the exploration of natural gas fields will begin immediately. When I say “immediately” I mean within the next few days, at two sites southwest of the Peloponnese and Crete, ExxonMobil.”

He added: “Our country, as I have repeatedly said, regardless of its commitment to a rapid green transition, must find out whether it currently has the ability to produce natural gas that will contribute not only to our energy security, but also to European energy security. Therefore, ExxonMobil will initiate these studies in the coming days.”

The Sanco Swift has been chartered by the Norwegian geophysical survey company PGS and is moored at Calis Limenes in Crete after completing the necessary testing of its mechanical systems. Two sites to the west and southwest of Crete cover a sea area of ​​40,000 square kilometers

With reference to media sources, they report that the goal is to make a decision on drilling in 2024 and conduct the first exploration well in 2025.

ExxonMobil is actively engaged in intelligence fields in the Cyprus EEZ since 2019, having obtained a gas production license at the end of 2021 on the 5th section with a share of 60%, which is unusually high for such cases. Nevertheless, in Greece, this ratio was 70/30%, which is quite rare and most often in third world countries.