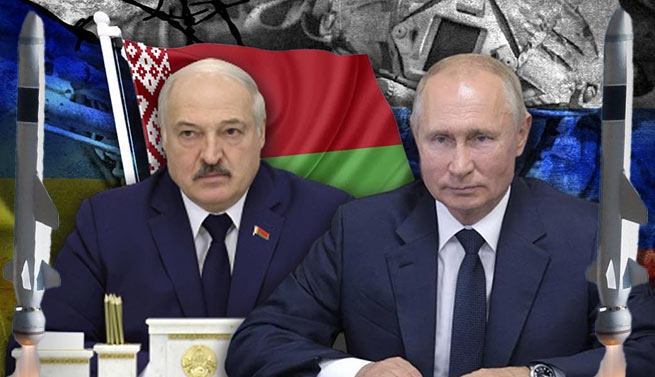 The war in Ukraine is taking a new turn: On Monday, Belarusian leader Alexander Lukashenko announced the creation of a joint military group on the country’s western border as a “response” to what he called “worsening tensions.”

At the same time, Russian President Vladimir Putin confirmed the strikes on a number of targets in Ukraine this morning, stressing that the response would be tough if what he called “terrorist” attacks on Russia continued.

The President stated that the situation around Belarus remains tense. “Moreover, the West is spreading the opinion that the Belarusian army will directly enter into a special military operation on the territory of Ukraine,” the head of state noted. “Succumbing to these stuffing, the military-political leadership of the North Atlantic Alliance and a number of European countries is already openly considering options for possible aggression against our country up to a nuclear strike.”

According to Alexander Lukashenko, this is not news for Belarus, and the Belarusian leader warned about the possibility of such a development of events for a long time. “Their goal today is not to prevent us from fighting on the side of Russia directly in Ukraine, so that, God forbid, a nuclear strike and so on. This is not the main thing. The main goal – it remains from ancient times – is to drag us into the war and deal with Russia and Belarus at the same time,” the head of state said.

What A. Lukashenko said: “In connection with the deterioration of the situation on the western border of the Union State (p.s. Russia-Belarus), we agreed to deploy a regional military unit of the Russian Federation and the Republic of Belarus. All this according to the protocols. If the threat level reaches the current level, as it is now, we will begin to use the power of the Union. This is a purely defensive move, as preparations are underway for an attack on our country by NATO countries. The armed forces of the Republic of Belarus will not allow this.”

In the midst of this dangerous escalation, Ukrainian President Zelensky and German Chancellor Scholl agreed to an emergency G7 meeting.

At the same time, Moldova announced that three cruise missiles fired by Russia at Ukraine crossed Moldovan airspace, and the Russian ambassador in Chisinau was called in for an explanation.

Russian troops launched strikes on Kyiv and six other cities – Zhytomyr, Khmelnitsky, Dnipro, Ternopil, Lvov and Nikolaev – in response to the explosion of the Crimean bridge in the morning. According to various sources, it is reported that the strike was carried out by 75 or 80 rockets.

As a result of these attacks, the number of dead and injured has not yet been determined. Eight people were killed and 24 injured, according to initial reports from Kyiv, but there are fears that this figure will rise over time.

Russian President Vladimir Putin is expected to convene the National Security Council on Monday to discuss the bombing of the strategically and symbolically important Kerch Bridge connecting Russian-occupied Crimea to the Russian mainland.

Analysts say the council’s convening is a sign that Moscow may be planning to escalate the conflict with Ukraine, as public demands from hardliners for retaliation abound. The meeting is also taking place against the backdrop of growing nuclear threats from Moscow.

Resilience of Ukrainians will only grow. Photos from post air raid #Kyiv. From @dkaleniuk and @TsybulskaLiubov and I have many more like this. Because #Ukraine just wants to live and live it shall pic.twitter.com/w5lGB7nO8w

Residents of Kyiv are returning to the streets of the Ukrainian capital after an air raid alert ended almost six hours later. Ukrainian MP Lesya Vasilenko shared photos of the streets of Kyiv after the air raid ended, promising that people’s resilience will only grow because “Ukraine just wants to live and will live.”

Residents of Kyiv are emerging from shelters as the air raid alerted lifted a short time ago and the metro began operation again. Several roads in the city center are blocked by police and signs of the recent strikes are scattered around the city. pic.twitter.com/NQDGPripKg

Kyiv: metro work restored after rocket bombardment. Traffic on all metro lines in Kyiv has been restored, according to the mayor of the city.

“Train traffic on all metro lines … has been resumed,” Vitali Klitschko said in Telegram. Earlier on Monday, the work of the metro in the Ukrainian capital was suspended due to numerous rocket attacks from the Russian Federation on Kyiv. Kyiv metro stations continue to operate as shelters, Klitschko added.

Russia fired over 80 missiles and 12 “shahids” for the first day of 10 August. Ukrainian military and PPO shot down more than 40 missiles and 9 drones. Ukraine needs more daily defence, in order to protect the sky and civilians. pic.twitter.com/m3rGnWrrIq

Shmihal: More than 80 missiles and 12 Shaheeds were fired by Russia in half a day on October 10th. Ukrainian military and air defense shot down more than 40 missiles and 9 drones. Ukraine needs more modern weapons to protect the skies and civilians.

russia mass shelling of civilian critical objects in 🇺🇦 places. You died. Uchora in Congress 🇺🇲 introduced a bill on the recognition of the Russian Federation by the sponsoring power for terrorism. Today, Russia has again shown that this document is on the clock. pic.twitter.com/bfSQhI8nEv

“As of 11 am (0800 GMT), 11 major infrastructure facilities in eight regions and the city of Kyiv were damaged,” Shmihal said.

The light of the morning, having spoken with the right guise of a power-terrorist, as if driving in our people. Not only on the battlefield, but also near peaceful places. The lands, as if covering up with roses about the world their crooked and evil essence and meta. It is necessary to bring that the strength of all our land is the only foundation for peace and security. pic.twitter.com/VvYGzgC2xn

“The world has once again seen the true face of a terrorist state that kills our people. Not only on the battlefield, but also in peaceful cities. A country that covers its bloody and criminal essence and goal with talk about peace. This proves that the liberation of our entire land the only foundation for peace and security.” V. Zelensky