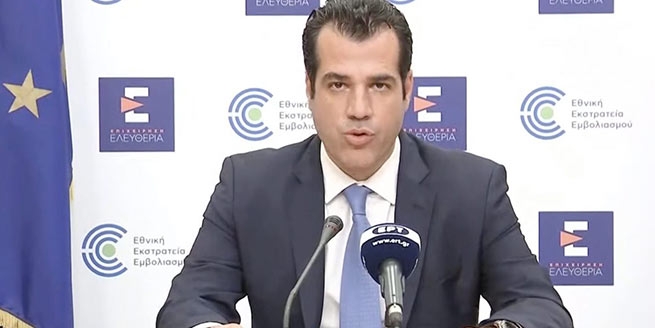 Greek Health Minister Thanos Pleuris announced on Friday that €300 fines for unvaccinated citizens over 60 will be waived if they vaccinate against Covid-19 later.

In an interview with the ANT1 TV channel, Plevris said that “those 300,000 citizens who paid a fine and were vaccinated later, the money will be returned. He notedthat relevant announcements will be over the next week.

At the peak of the spread of the coronavirus in winter, the Ministry of Health imposed a fine of 100 euros per month on every citizen over 60 who did not receive the basic vaccination against Covid-19.

The fine was imposed from the second half of January in the amount of 50 euros, throughout February and March – 200 euros and the first half of April – 50 euros. The ministry has abolished the fines as of April 16, 2022 and does not appear to be imposing them again. However, those over 60 who remain unvaccinated will presumably be charged a €300 fine to the tax office. The ministry even threatened seize assets (accounts or property)if the fine is not paid.

Plevris stressed that “vaccination of people over 60 in Greece is 80%” and “there is interest in updated vaccines.”

Regarding the return of unvaccinated health workers to their jobs, the minister said they are considering returning them after health authorities review epidemiological data in the coming weeks. “Unvaccinated medical workers have no place in the health system because they do not believe in science,” Pleuris said, however. He added that there are currently 2,100 unvaccinated medical workers, of which 200 are doctors. The rest are mainly administrative and support staff.

In September last year, over 7,000 healthcare workers nationwide have been suspended without pay for being unvaccinatedb. Over time, thousands of them appear to have been vaccinated and returned to their jobs. Some of this vaccination cost serious consequences – loss of health. The absence of 7,000 people from public health facilities has put a strain on the healthcare system, leading to problems and long delays for patients.