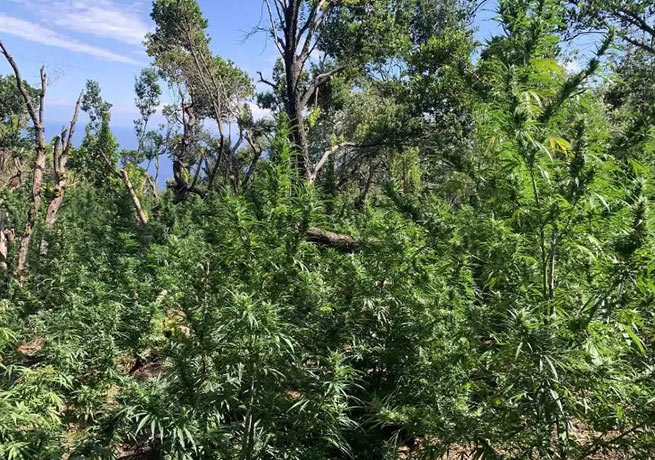 A large cannabis plantation with 2,440 seedlings was discovered by the Police of the Anti-Drug Directorate of the Patras Security Service in a hard-to-reach forest area in Zagora (Magnesia).

During the operation, the police discovered an organized plantation where 2,440 hemp seedlings, three drying plants and 13 kilograms of a ready-made narcotic substance were grown.

According to the police, the criminals were expected to have a total cannabis harvest of at least 2,440 kilograms, and the estimated monetary gain, together with the amount of cannabis found, would have been between 7,360,000 and 9,812,000 euros.

The plantation was cultivated on a specially designed area surrounded by dense forest vegetation, with a total area of ​​five acres, divided into four levels, which were connected by improvised paths. At the same time, farmers installed irrigation pipes with a total length of about five kilometers, which ended in two reservoirs for collecting water, fed by a stream.

Near the plantation were two wooden buildings with nine makeshift beds, clothes, linens, kitchen utensils and gas cylinders. The police were reportedly unable to apprehend the cannabis growers.

The case has been referred to the Criminal Prosecutor of Volos, while the Anti-Drug Department of the Police of Patras is continuing its investigation.