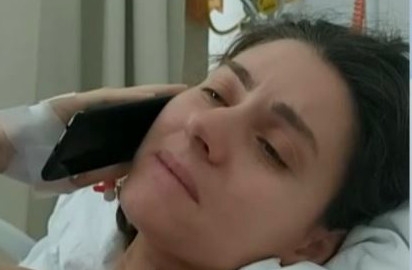 A young woman attacked by a pack of dogs is in hospital with injuries to her shoulder, leg and right arm.

Agapi Costea, a factory worker in Kalamata, spoke to MEGA about the incident and described the nightmare she experienced. The report was conducted from the hospital, where she was hospitalized urgently.

A woman, a mother of two, was attacked by a pack of dogs on her way to work. And instead of getting to the workplace, she ended up in the hospital with serious injuries. The townswoman tried to defend herself by falling to the ground, and fortunately escaped being bitten by the dogs on her head and neck. Two women heard her desperate cries and rushed to help.

The victim of the attack spoke to MEGA reporters and spoke about the nightmare she had to endure. “I still don’t feel well today… I have nightmares. But I have to deal with all this, because the children are waiting for me at home. I was already inside the plant, I left the car outside. At 7:23 I was almost at the workplace, the factory area. Suddenly, dogs began to approach me from the left side, and they began to rush at me, biting my legs. I could not do anything right away, I was numb with horror, ”the victim says.

Ms. Costea described the incident in detail and with tears in her eyes, while stating that she did not know how she would go out again, fearing another possible attack. “I saw this flock for 3 days. On the first day they barked at the driver and he was afraid to get out of the car. Nobody warned me about the dogs on the factory grounds. When the incident happened, I was assisted by the girls, Lady Yota and Lady Maria, who were at a considerable distance from me, who heard my screams.

They saw a ball of brutal dogs tormenting me …. I curled up in a ball to protect myself. The girls didn’t see me, they only saw the dogs above me. They ran up, picked me up and took me to the hospital. I was told that if this continued, and no one helped me, perhaps I would have suffered fatally, ”she continued.

The owner of the factory was arrested. “We see that in industrial areas animals are grouped and form flocks. The owner, if he “tolerated” (and did nothing about the placement of animals on the territory of the factory) even a short time, is responsible. The reason I asked if the factory fed animals is because “the animals were taken in there” or if they took refuge there themselves. The police tried to find out whether it was an attack by “someone’s animals” or stray dogs. As a result, the police arrested the owner of the factory,” said lawyer Yannis Marakakis.