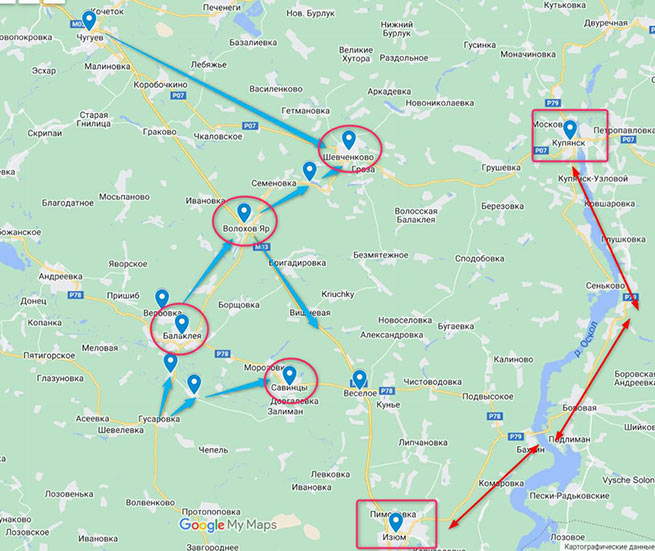 The offensive of the Armed Forces of Ukraine, carried out in the Kharkiv and Kherson directions, was timed to coincide with the meeting of NATO leaders at the Ramstein military base, experts say.

After a massive artillery and rocket attack, which forced the troops of the Russian Federation and the allied LDNR to disperse, the Armed Forces of Ukraine launched a massive attack in a sector near the town of Balakleya, Kharkiv region.

The Ukrainian side still does not officially comment on the counteroffensive (only Ukrainian President Volodymyr Zelensky yesterday announced “good news”, but no specifics). Judging by what the Russian military telegram channels write, the main battles are taking place in three areas:

In the Kharkiv region, Ukrainian troops launched a breakthrough near Balakleya. Also, the Armed Forces of Ukraine are advancing on Kupyansk, bypassing Balakleya from the north.

In the Donbass, the main goal of the Russian army now is an attack on Bakhmut. This is reported in British intelligence. According to the channel “The world today with “Yury Podolyak”the situation in the Kharkiv direction (as of 12:00 09/08/22) is as follows:

“The offensive of the Armed Forces of Ukraine, as expected, stalled. The flying detachments occupied everything that they could occupy yesterday, and then, taking into account the approach of the reserves of the RF Armed Forces, they must already fight seriously for everything.

At night, there were attempts to probe the defense of the allied forces in the area of ​​Shevchenkovo ​​and Balakliya, but given the approach to the latter late last night (after a forced march) of the Russian reserves, the prospects for the enemy here are not bright.

Also, the Armed Forces of Ukraine failed to preempt our units in the area of ​​the settlement. Savintsy, and thus the enemy’s strike units were prevented from reaching the rear of the Balakliya and Izyum groupings of the RF Armed Forces (which, against the backdrop of the problems of the first two days of fighting, was our most important tactical success). Now, relying on this area, we can prepare for the battle with the main enemy forces, which, having left Kharkov yesterday, had not yet entered the battle as of 12.00 08.09, but were concentrated at a distance of 10-25 km from the front line.

At the same time, Russian aviation and artillery are working to the fullest and inflicting significant losses on the enemy, which puts the Ukrainian command before a choice – either to attack quickly, try (until the RF Armed Forces have managed to pull up all the reserves) to build on their success and break the enemy in parts (but this is very risky , since history may repeat itself in the Kherson direction), or try to keep what is occupied, but at the same time risk wasting aimlessly your shock fist, which in the coming days will be hit with everything that is.

In fact, the main part of the Balakliya battle has not yet begun, and it can end in favor of either side. But in many respects their prospects (both sides) will depend on how large forces the allied command allocated to the Balakliya direction. Because the second enemy grouping from the Barvenkovo ​​region has not yet entered the battle”.

Meanwhile, according to the Ukrainian TV channel RubbishBiden has approved a new $675 million military aid package for Ukraine, Defense Secretary Austin said. In addition, according to Blinken (who is now in Kyiv), the Biden administration will provide $2 billion in long-term foreign military funding to Ukraine and its 18 neighbors, including NATO members and development partners.

The money has been taken out. What price they cost the people of Ukraine, one can not remember: “they cut down the forest, the chips fly.”