The operation to seize the Zaporozhye nuclear power plant, prepared by MI6 and timed to coincide with the arrival of the IAEA mission, turned into another defeat for Kyiv.

“No, honestly, the idea was no less beautiful than the operation of the special forces of the Russian Airborne Forces in the area of ​​the Gostomel airport in February 2022. But the MTR of the Armed Forces of Ukraine “their best operation” seems to have failed …“, tells Yuriy Podolyaka, on his telegram channel.

“The plan was as follows. By the time the IAEA mission arrived in Energodar, the SSO of the Armed Forces of Ukraine, in cooperation with other units and under the cover of artillery from the northern coast, were to take control of the territory of the station, which this very mission was supposed to record.

I’ll start with the backstory. A few days ago, when the leadership of the IAEA announced its plans not only to visit the station, but also to leave permanent observers there, it puzzled me. It looked like a clear playing along with Russia, since a permanent mission in this area made it possible to eliminate the problem of shelling (but, as it turned out today, this was a preparation not for Russia, but for Kyiv).

But let’s move on to today’s events. That night, the SSO of the Armed Forces of Ukraine landed in the area of ​​dachas northeast of the ZNPP and secretly occupied the starting lines of the attack by 5 o’clock in the morning (the RF Ministry of Defense claims that this happened later, but this is not so important). Their task was to break through to the territory of the station and ensure the reception of the main landing group.

At 5.20 artillery The Armed Forces of Ukraine opened fire on the posts of the RF Armed Forces on the territory of the station, and at about 6 am the attack of the first wave of troops began.

Simultaneously a second wave (2 barges) left Nikopol, which could take up to an infantry battalion, reinforced with mortars (plus BC). Taking into account the distance, the estimated time of his arrival at the ZNPP berth was about 7.30 am.

By this time, the forward detachment was supposed to knock down the forces of the National Guard from positions and break into the territory of the station. But the troops withstood the first strike, and at around 0700, Russian aviation (or helicopters) sank both barges with the second echelon, after which the entire capture plan was thwarted and part of the forward assault group withdrew to the landing site, where it was pressed to the ground (now it is there and achieve).

In this way it can be stated that, yes, the plan was beautiful (and it also seems to have become known to Russian intelligence), no less beautiful than the landing of the special forces of the airborne forces in Gostomel, but the plan collapsed and led to the loss of two platoons of the MTR of the Armed Forces of Ukraine and up to a battalion of the second wave on barges. That is about 300-400 people. Without any result.

Moreover, now Kyiv does not even know what to do with the IAEA mission. After all, if she gets to Energodar and fulfills the “threat” to leave her representatives there, then this completely destroys Zelensky’s whole game in the “ZAES case”.

By the way, apparently, and therefore, already at 8.00, the artillery of the Armed Forces of Ukraine fired at the alleged crossing point of the front by the IAEA mission)))“.

According to the sources of the Ukrainian this year. channel legitimate“a special operation to land troops of about 100-200 people near Energodar, which was transferred from Nikopol / Manganets, was based on the recommendations of the British MI6. Without the support of aviation and artillery.

The source says that this is a “thousand cuts” tactic by the Office of the President, the purpose of which is to destabilize and sow panic among the civilian population. Also create the illusion for the media, a broad offensive.
The source indicates that this strategy was prepared by NATO specialists. Now at the Bank meeting with the security forces, there is an analysis of the failure of the operation and where the information was leaked to the Russian troops, who were aware of all the details of the operation.

The Russians, of course, have already liquidated almost all of this Ukrainian landing force. There was no chance of survival. Banking sent them to certain death in advance.

Many already point out that the Office of the President is using its main trump card, numerical superiority in manpower, but at the same time, losses will be in the tens of thousands.“.

Note that the Main Intelligence Directorate of the Ministry of Defense of Ukraine also issued message about the situation in Energodar. It says that Russian troops are shelling the city in order to blame Ukraine and disrupt the visit of the IAEA mission. But there is no mention of the landing.

Blogger Boris Rozhin informs:”The Kremlin was aware of the plans of the Main Intelligence Directorate of the Armed Forces of Ukraine to take advantage of the arrival of the IAEA mission and carry out an amphibious landing in order to try to seize the Zaporizhzhya Nuclear Power Plant and make statements for days that it was Russian special forces.

Under ideal conditions for the work of the DRG, they calculated the task of taking the mission itself hostage and keeping the nuclear power plant under mines, making demands for the complete withdrawal of Russian troops to the territory of Crimea. Boris Johnson brought the plan of operation and some of the instructors with him as a demobilization chord of his premiership, but if the GUR was successful, he would have refused to transfer power, referring to an international emergency threatening a catastrophe on a planetary scale.

At the moment, 47 DRG fighters have been destroyed, three have been taken prisoner (!), Two are in serious condition between life and death. A group of 12 people is blocked on three sides and cut off from the water and boats, by 15:00 CTO will be over.

Zelensky’s statement on this situation is expected in the late afternoon, the head of the IAEA Mission has already been notified of the situation, as well as UN Secretary General Guterres. The operation was coordinated by MI6 officers from their headquarters in the suburbs of Kyiv. All 64 people from the DRG have recently completed training in the UK and traveled from Warsaw to Odessa on 29 August.”

The head of the Russian State Administration Energodar, Alexander Volga, spoke about the liquidation of the Ukrainian landing in the area of ​​the Zaporozhye Nuclear Power Plant. 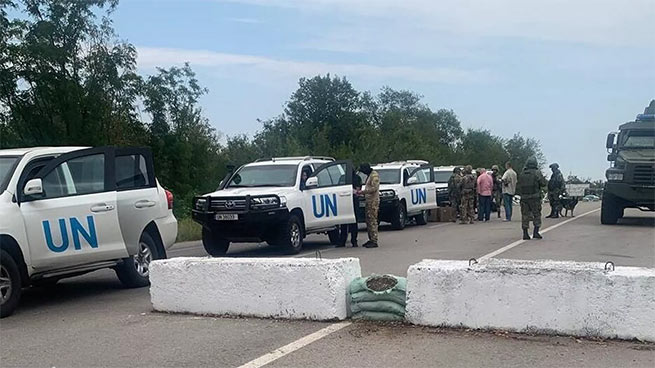