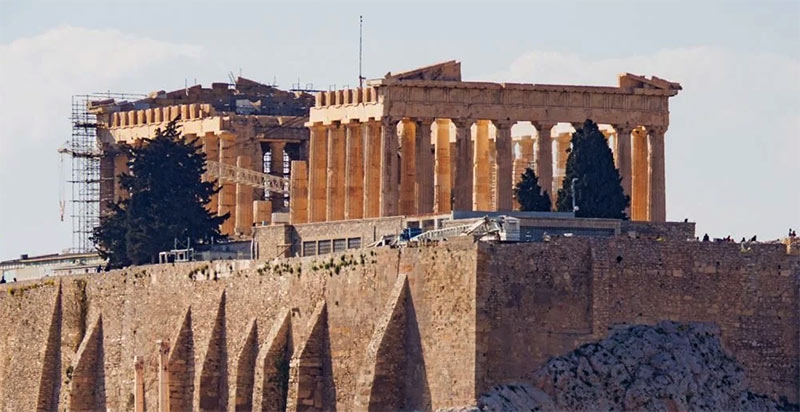 The Central Archaeological Council of Greece has given a positive opinion to the geotechnical study, and the project will be funded by the Recovery Fund.

The protection and maintenance of the walls of the Acropolis, based on comprehensive principles that include all permissible interference with the monument, is encouraged by the Ministry of Culture and Sports. Since the Central Archaeological Council gave a positive conclusion to conduct a geotechnical and statistical study of the perimeter of the walls and their rocky base in certain places of primary importance.

The study examined stability in seven selected areas, assessed the degree of risk. Works on the walls are planned in conjunction with the strengthening of the rocky slopes and other activities to improve and shape the archaeological site.

All funds for the work are secured as the project is included in a wider program of restoration and renovation of the monuments of the Acropolis, which is funded by the Restoration Fund with a total budget of 10,000,000 euros. A strategic action plan for the overall management of the walls is a long-standing requirement for monument protection and a prerequisite for activities within the perimeter of the walls.

It specifies the measures taking into account and jointly assessing the preserved historical phases, the risk in terms of the structural stability of each section of the walls and the state of preservation of the stones. Each intervention takes into account the presence of ancient sculptures and significant structural elements after examination by appropriate methods.

The strategic plan should include a general description of the historical phases of the walling and later interventions. It presents the historical context and history of the construction of the monument, by sides and historical periods, and assesses the stages from a historical, archaeological, artistic, aesthetic and symbolic point of view. With regard to structural problems, the problems inherent in construction are mentioned, the pathology of the structure is analyzed, and a general assessment is made of the issues of archaeological progress, including the creation of archaeological routes using walls as a guide. In the area of ​​the rocks, a phased full reconstruction is planned along the perimeter of the Acropolis.

The present form of its walls is the result of successive interventions in the classical period, from the late Roman period to the present day, which, in most cases, do not have distinctive features, so their dating on the basis of morphological characteristics is often uncertain.

In 1834, it was decided to remove the walls, “having no archaeological or historical value”, and systematic work began to remove the medieval and Ottoman phases. Reinforcement work was carried out in the first half of the 20th century under the direction of the archaeologists Balano (1899-1938) and Orlando (1947-1949), mainly to solve structural and static problems.