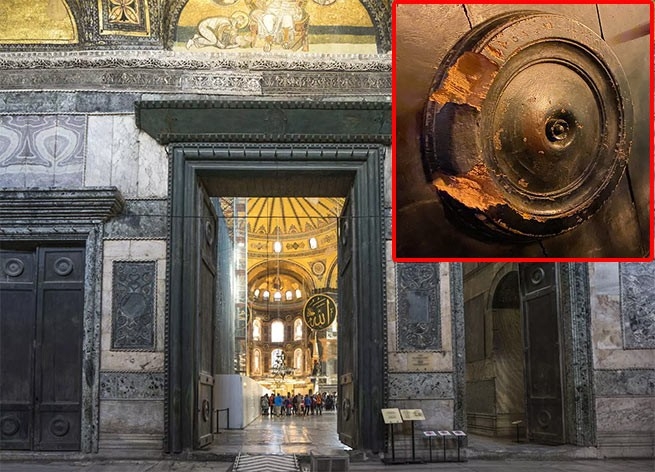 In an open letter to UNESCO Director-General Audrey Azoulay, the Greek Archaeologists Association (SEA) sounded the alarm over recent reports of vandalism and damage to the former Orthodox Hagia Sophia in Istanbul, which was converted into a mosque in 2020.

They also expressed concern about the medieval church of Chora Monastery in Istanbul.

The SEA has asked Azule to intervene quickly to change the current situation as it poses risks to world heritage sites such as the Hagia Sophia and Chora Monastery.

He added that he would also reach out to the international scientific community for resolutions and signed petitions to preserve the monuments.

The SEA stressed, among other things, that since 2020, when the 6th-century Hagia Sophia was converted from a museum to a mosque, photographic evidence has emerged that points to “a bleak outlook for its future.”

In its open letter, the Association of Greek Archaeologists states, among other things, that:

“During the use of Hagia Sophia as a museum, Byzantine mosaics were discovered and preserved, and parts of the building were restored in accordance with a program that provided for the gradual disclosure and promotion of the historical identity of the monument. Thus, the visitor, both Turkish and foreign, had the pleasure of enjoying the value of this leading monument that has adorned Constantinople since the 6th century AD.

The decision of the Turkish State Council in 2020 to reverse the decision of 1934, which provided for the museum use of Hagia Sophia, and to recognize exclusively its status as a wakfi of Sultan Mohammed II (1432-1481), paved the way for the restoration of the cathedral. a monument in working order during the Ottoman era. At the time, in 2020, there was global concern about the problems that would arise from using such a monument as a place of worship, as unscientific management would gradually degrade Hagia Sophia. We have been warning about these problems along with other scientific organizations.

And, unfortunately, these problems have now appeared along the way. Since 2020, and especially recently, photographic evidence has begun to appear]with ominous prospects for the future of Hagia Sophia. The newer wooden shutters of the Imperial Gate were damaged, the plaster of the walls was scraped off and removed, the fountains and doors were used to store shoes, the marble floor slabs were destroyed. Unique Byzantine mosaics remain hidden and invisible. Archaeological science remained outside the monument.

All this is due to the thoughtless influx of visitors (pilgrims) to the mosque and the attitude towards Hagia Sophia as a mosque without historical depth, as a place where there is no respect for history and art. The lack of control over visitors and the absence of security guards indicate indifference to the protection of the monument and leave the protection of a unique monument to the will of each visitor or pilgrim.

Over the past few years (starting in 2006), when the Department of Religious Affairs took over the management of sites formerly administered by the Turkish Archaeological Survey, many sites have suffered irreparable damage. “.

The SEA also raised concerns about work currently underway on another of Istanbul’s leading Byzantine monuments, the former church of Chora Monastery, so that it too can be reopened as a mosque.

An open letter to SEA in Greek is here.