Greek Statistical Bureau Hellenic Statistics (ELSTAT) published a new report on the causes of death of citizens registered in the country.

The data is derived from death certificates submitted in 2019 by physicians and, in cases of violent or sudden death, by forensic services. The first key element is that deaths increased by 3.9% in 2019 to 124,954. The main causes were diseases of the circulatory system (35.4%), followed by neoplasms (cancer) at 24.5%.

The main oncological diseases from which citizens died:

Key findings on fatalities from the ELSTAT report:

• The leading causes of death in 2019 were diseases of the circulatory system, with 44,234 deaths. This is followed by deaths from neoplasms, which amounted to 30,637 people, and 13,591 people died from respiratory diseases.

• Mortality from infectious and parasitic diseases has decreased from 18.4% of deaths in 1938 to 3.4% in 2019. It is worth noting that for comparability of data over time, changes in the use of the International Statistical Classification of Diseases should be taken into account.

• The number of suicide deaths reported by forensic authorities was 530 in 2019, compared to 567 in 2018 (a decrease of 6.5%). It is noted that possible deviations from the data of other bodies may be associated with different methodology or other factors, such as the need for forensic medical examination bodies to conduct long periods of investigation into the circumstances of death, deaths as a result of late suicide attempts, etc. 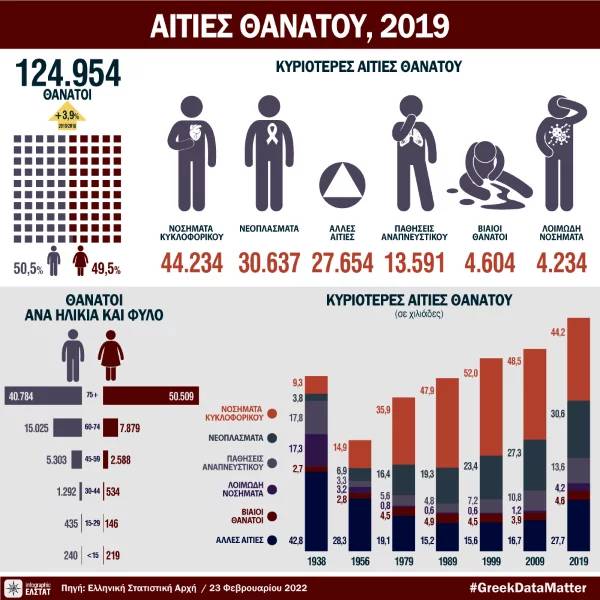