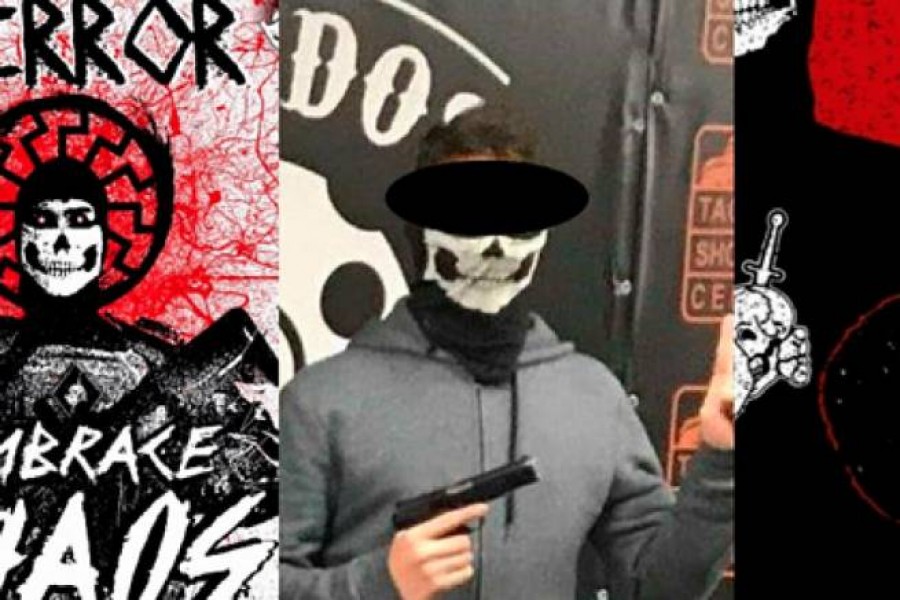 The Estonian security police reported last year that they had installed the leader of the Feuerkrieg Divisi (“Fire Division”). This was preceded by numerous arrests of members of the dangerous group in different countries. The organization prepared numerous arson, explosions and murders.

The leader managed to avoid such a fate for a long time, the newspaper reports. BB.lv. However, as it turned out during the investigation, the leader was not arrested, not because he could not be caught. Just because of its age, Commander FKD, as his pseudonym sounds, does not fall under criminal liability. The leader of a group promoting violence and planning numerous bloody murders of people they disliked turned out to be … a 13-year-old schoolboy.

His active activity on social networks consisted of recruiting like-minded people, moreover, from different countries who shared his misanthropic views, ideas and plans. The enemy of the members of the group turned out to be all of humanity.

At the same time, a teenager living on the island of Saaremaa, in the small town of Kuresaare, found time to go to school, and teachers do not complain about his progress. Given the age of the head of the group, police from the security service not only have no right to detain him, but also disclose his details or show a photograph. The only answer that sounds from the lips of the police to the journalists’ questions is laconic: “They are doing it.”

It should be noted that even the members of the Fiery Division had no idea about the age of their leader. Although he also selected accomplices, taking into account the years they lived: only some crossed the age limit of 20 years, and many were still minors. At the same time, girls were not taken to the “team”. The web of the criminal community has covered countries such as the USA, Canada, Latvia, Germany, Great Britain, Poland, Lithuania, Croatia, Estonia, the Netherlands and other states.

The activities of the Feuerkrieg Divisi participants were varied. They shared with each other the nuances of acquiring weapons and making explosive devices, distributed propaganda materials calling for misanthropy. The enemies of the group were considered all the surrounding people, except for its members, the leader divided them into “groups” according to the degree of importance:

The members of the group called ordinary people “norms” and put them in the long “tail” of the line of those who should be destroyed:

“We are not afraid to die and kill everyone who gets in our way.”

Seventy active members of the Fiery Division operating in various countries of the world – is that a lot or a little? Judge for yourself. The plans of the young people who hated the whole world were grandiose. For example, the terrorist attack on London, the arrangement of training camps for high-quality training of gang members using the experience of the German National Socialist Party. On October 8, 2019, the group claimed responsibility for the bombing of Technopolis in Vilnius. There were threats against Belgian MEP Guy Verhofstadt and YouTube CEO Susan Wojcicki. To the great regret of the leader, who personally handled the selection of potential members of the Feuerkrieg Division, there were not so many suitable candidates. He complained to like-minded people:

“It annoys me that there are so many idiots around, and not quality people.”

The Fire Division attracted the attention of law enforcement officers in August 2019, after the arrest of 23-year-old security guard Conor Climo in Las Vegas (Nevada, USA). He was accused of making “Molotov cocktails” and bombs, keeping weapons, preparing explosions in a gay bar and a synagogue. During the police investigation, Klimo was found to actively communicate with extremists from the Feuerkrieg Division, while all of them expressed aggression towards him due to the fact that they were caught:

“Traitors like Klimo will not run away alive. They will be shot on the spot for being traitors to our race. If I had only one bullet and faced an enemy and a traitor, I would leave it in him.”

The next “call” for law enforcement officers, this time British, was the appearance on social networks of a picture depicting Dave Thompson, the chief of police of the West Midlands County, with a pistol pointed at his head. The laconic phrase under the picture read: “Traitor to the race.” And one might not have taken this fact too seriously had it not been for the rapid spread of the picture with the attached list of addresses under the general title of “high value targets”: police training centers, temporary detention facilities, West Midlands police stations. This fact seriously alarmed local law enforcement officers and called for active action.

Meanwhile, in quiet Estonia, the police received information from the FBI. It claimed that the leader of the Internet neo-Nazi group, which is involved in the deadly conspiracy in Nevada, judging by the traced connections, is located in Estonia. The local provider helped to identify the leader – the HeilHitler8814 account on the popular gaming network Steam. After that, the police could only go to the specified address. And here they were in for a real shock.

The leader of the dangerous gang turned out to be a 13-year-old schoolboy, harmless in appearance and successful in his studies, according to the teachers. After reviewing his chats, even experienced police officers were dumbfounded. And what about his parents, you ask? Fully trusting their child, they multiply their family fortune by earning money in Finland. Not in the least interested in his “online fun” …