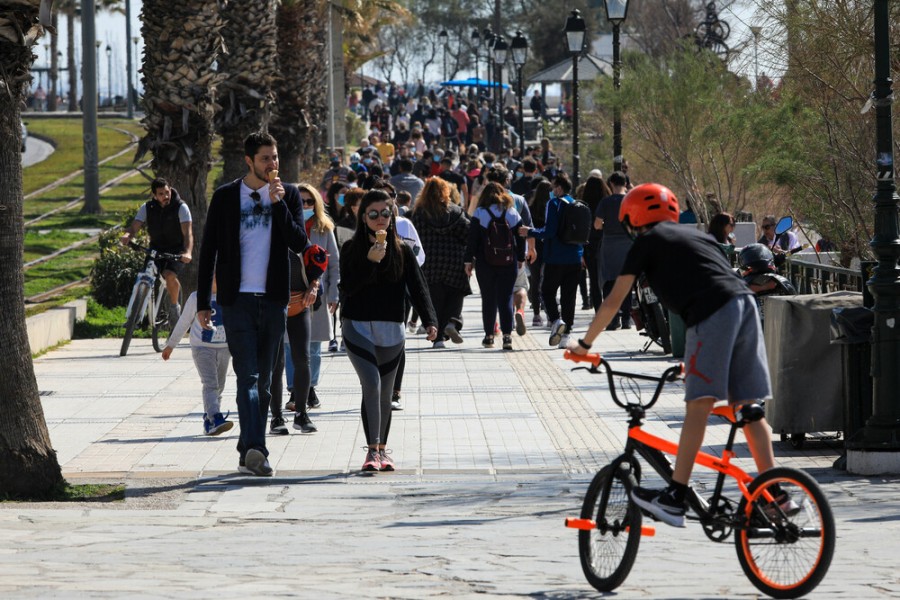 Sociologists undertook to investigate such a phenomenon as a pandemic, trying to answer the question of how humanity lives with this scourge.

A new study “διαΝΕΟσις” records changes in citizens’ attitudes towards the crisis and the impact of the pandemic on their lives a year later. The study is called “Ένας Χρόνος Πανδημία: Πώς Ζουν Οι Έλληνες” and has been recording the views and attitudes of Greeks towards the coronavirus pandemic since April 2020.

Starting in December 2020, the questionnaire has been updated in collaboration with the National Vaccination Committee so that the results can be used to plan a vaccination strategy for the country’s population.

A new, fifth such study, carried out in collaboration with Metron Analysis on a nationwide sample of 1,100 people aged 17 and over, in early March 2021, depicts a completely different situation in society than at the beginning of the pandemic.

Since April last year, there has been a sharp decline in optimism and prospects. In April 2020, 86% believed that things in the country were “going in the right direction,” and the prevailing emotions were optimism. At the same time, when asked when, according to their assessment, we will return to “normal everyday life”, 7 out of 10 Greeks answered “until September 2020”.

On the contrary, young people, aged 17-24, have a completely different attitude. The expectations of the Greeks are now completely different from the expectations they had a year ago, when most people thought that the coronavirus was a phenomenon that would only last a few months. Now the majority of Greeks (54.4%) believe that they will return to normal someday, after 2021.

Typically, many have lost their optimism. The first positions in the rating (the answer to the question: what feeling are you experiencing the most now) is occupied by “uncertainty”. Optimism ranks sixth on the list.

Nevertheless, when asked what stage of the crisis, according to respondents, the country is now (from September 2020 to January 2021), the majority answered that “the worst is yet to come”.

The beginning of vaccination seems to have changed this picture. Now the majority (54.5%) say that “the worst is over.”

When asked whether the pandemic poses a serious threat to humans, only 20% answered “no” (“this is a common simple disease”), and 76.9% consider the virus to be a serious threat.

52.3% consider it possible or very likely that they themselves will become infected with the virus, while two out of three (65.5%) believe that someone infected with this virus is in “very” or “sufficient” risk of contracting Covid19.

These rates have remained relatively stable in recent months. It is noted that, nevertheless, a significant part of the population constantly experiences fear (for themselves or loved ones, that they will get sick or are already sick without symptoms, etc.).

Quarantined in April 2020, workers said that only one in four employees (25.4%) worked normally at their workplace, while the rest did remote work or were in some form of suspension.

Compared to the previous survey, the general acceptance of the procedure and vaccines by the general public is still valid, with 81.1% assessing the initiation of vaccination as a positive development, 72% satisfied with the prioritization (prioritization).

But so far, only 1 in 3 is satisfied with the number of vaccinations. For the first time since the beginning of the survey, 9.4% of respondents state that they have already received at least one dose of vaccine, and 28.7% state that it was a family member.

Of the 9.4% of those vaccinated, 99% said they were satisfied with the vaccination process. In September 2020, 49.5% said they would receive the vaccine, but after repeated statements about the effectiveness of many different vaccines and the start of vaccinations in many countries around the world, this percentage has changed.