The flower war in nightclubs is a familiar phenomenon. However, in Veria, the regulars who found themselves at the bouzouki, where the singer Cristallia sang, seem to have gone too far.

While she was on the dance floor, where she performed folk hits, the flowers began to rain when one of the visitors to the nightclub invited the singer to his table.

The ongoing war of colors
The young singer, seeing that the situation and the flower war was in full swing, sat at the table for a while, continuing to perform her favorite folk songs, and returned to the dance floor, where she was literally buried in trays of carnations thrown by her fans.

“We have PASOK and I don’t know it,” one TikTok user commented, while another noted that there were more trays than flowers.

Greek folk instrument “bouzouki” is an old and invariable companion of any performance, which gave the name to the whole event, uniting the Greeks no worse than a stack of ouzo. (Contributed by Alex from Grekoblog)

The 20th century gave this national entertainment the necessary gloss and show elements, but the spirit itself sweeps through the ages! True, for many years now, the Greeks have associated the word “bouzukia” (plural from “bouzouki”) with considerable expenses. Taking into account the popular nature of what is happening, going to such an event can become a specific entertainment for a tourist. Someone may have an allergic reaction to cigarette smoke and unceremonious Greek fun … But once instilled love for buzukya remains with you for life.

What to Expect When Going on a Bouzouki
Imagine a medium-sized nightclub, for some reason completely filled with tables and chairs. Narrow passages between them, so that the line “in tightness, but not offended” pops up in memory. The apple obviously has nowhere to fall.

Not a single table can boast of having food more substantial than nuts, but bottles and glasses occupy every square centimeter on it. As soon as the eyes have time to get used to the darkness, cigarette smoke begins to corrode them, creating a kind of romantic translucent veil in the room. Going to the bouzouki, smoking Greeks take up to 4 packs of cigarettes with them so as not to buy exorbitant prices on the spot. The men take a puff with the air of a businessman making a big deal, the women with the weary grimace of a socialite. There is an element of light posturing, self-admiration, which will soon be replaced by simple and unrestrained fun to the cries of “Oops!”. 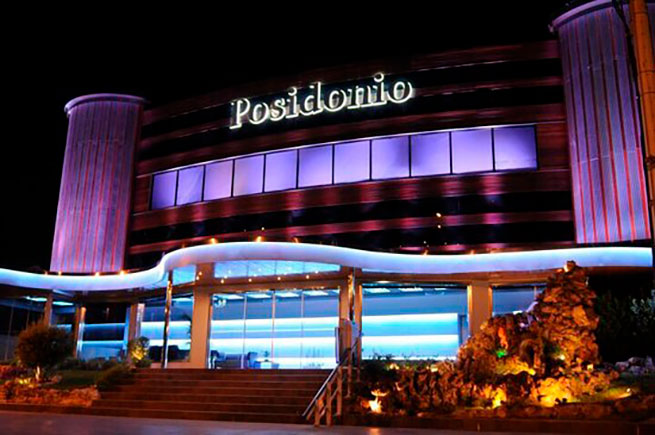 How to dress for bouzouki
There are no age criteria for visiting: here you can meet both yellow-mouthed female students and their second-generation ancestors. Glamor in its conventional sense does not belong here, but for women of any age there is an unspoken dress code: get out of the closet everything that is most elegant, most open, most heeled and most brilliant. Create an artistic mess so beloved by the Greeks on your head and cover your face with the most war paint. Now you can go.

For men, as always, things are simpler: just take one or more copies of the female with you in all their splendor and do not forget your wallet. Buzukya clubs are open only on Fridays and Saturdays – and even then not every week. Their schedule and program should be specified in advance on the websites or by phone. 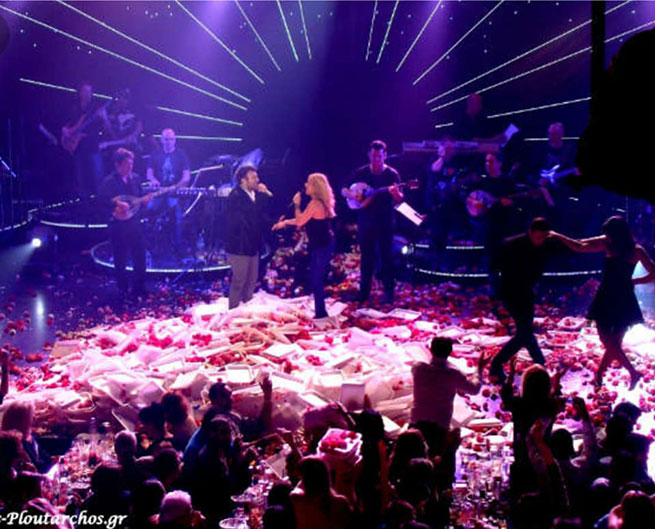 Do I need to book a table and how much does it cost
Even with a full parade on a buzukya today, you can’t go just like that, from a floundering bay. The hike should be thoughtful and planned, because you need to book a table for a certain number of people (starting from 2). Nowadays, this can be done either by contacting the club directly or via the Internet. The price usually includes a table reservation and a bottle of some kind of alcohol.

Unfortunately, now not all clubs agree to book a specific table and guarantee its proximity to the stage, and it is the tables of the first row that are so attractive in the eyes of the Greek! As in the rest of the world, to get the best table, the same system of “carrot and stick” applies here – kinship and delicate bribes. If your decision to go to the bouzouki was spontaneous, then rely either on the presence of a free table and a blue twenty in your hand, or settle for a bar counter. 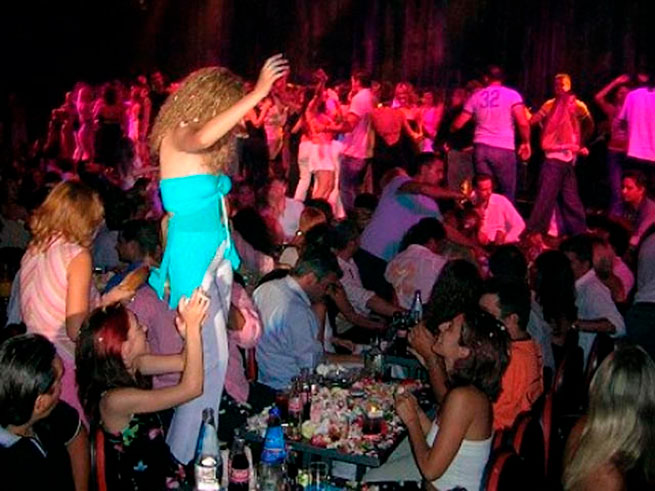 The same spontaneous people or just club loners huddle there. The bar counter is very far from the stage, but they don’t take a lot of money for using it. Wanting to roughly orient you on prices, I’ll say that the price of an entrance ticket for a bouzouki in a good club + 1 drink at the bar is 20 euros. The price for a table for two for bouzouki + a bottle of wine starts from 70 euros, a table for four – 170 euros, etc. Add to this the cost of a paid wardrobe, drinks, professional photographer services, cigarettes and flowers, then look at how many people and how often bouzouchias visit, and you will understand that there is no crisis in Greece.

Who plays the bouzouki
Around midnight, a warm-up will appear on the stage. As in the whole world, he is assigned the unenviable role of an appetizer for the main course, but let’s not forget that all our stars started with this … So it is quite real to see Sakis Rouvas as the opening act of the future.

The buzukyas are mainly invited by major Russian stars, whose music is well-known enough for the audience to sing along to their heart’s content. Coming on tour to another city, popular musicians perform not in stadiums or concert venues, but in buzukya clubs. The throughput of the people is less, but the contact with the viewer is much more lively. Those who did not get to the first performance should not be upset: as a rule, the star stays in the city for a month or two, until everyone who wants to visit the show at least once … or even two.

The real show does not begin until one in the morning, when the main heroes of the occasion take matters into their own hands. With their appearance, reverent silence is not established at all, no! The Greek public does not catch with bated breath every note of their favorite performer, but sings along with him! The noise and din is such that even one’s own thoughts are not audible. This does not bother either the artist or the administration of the institution – rather, on the contrary, it is perceived as the highest appreciation of creativity.

Flowers on bouzouki
Flowers are the same invariable attribute of bouzouki as music, dancing and alcohol! But, unlike our latitudes, it is unnecessary to go to the stall for them. Throughout the evening, girls with flower trays in their hands will scurry around the hall, ready to sell you any number of buds (only this part of the flower is used! Stems are not quoted). The price of such a tray is from €5 to €20, depending on the prestige of the institution.

There are the following ways to dispose of this good. The first and most common is to throw handfuls of flowers at a poor musician, thus expressing their warm approval. It’s okay that weighty flower heads sometimes get into the physiognomy of a singing idol, the main thing is that he will look at you and remember! The second method is more gentle, but requires a more serious investment: you can buy several trays from the flower girl at once and send her to the stage to shower the artist from them.

By tradition, she will throw one handful in the direction of the customer, so that the musician knows who to thankfully wave his pen and send an air kiss. And even dedicate a song with a sincere title “s’agapo” (Greek “I love you”).

The third option, which is also often used, is to throw flowers on your lady of the heart or just any person you like. Such a flattering sign of attention.

What else do you need to know
Separately, I would like to note that there is simply no such thing as a phonogram for bouzouki. This number will not work with the Greeks! Instead of flowers, they would have thrown rotten eggs at the unfortunate performer. By four or five in the morning, the bouzouki should reach its climax: the people will rise from their seats and go dancing, filling the stage, the aisles, and soon the surface of the table.

Those who wish will be able to buy small plates so that with a cry of “Oops!” bang them on the floor and start dancing. The Greeks are not so much drunk alcohol – they still drink a little, but native music – it excites the blood to such an extent that there is no strength to stand still …

Only by visiting the buzukya, you can rightfully say that you have joined the Greek entertainment.