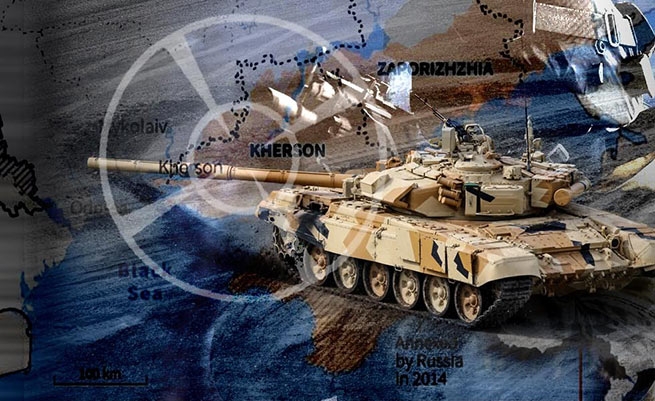 The Zelenskiy administration is preparing to launch a decisive offensive on Kherson, trying to sell Biden a “victory” ahead of the US congressional elections by November 8 to justify tens of billions in aid from the pockets of American taxpayers.

At the same time, no one has been looking at the losses incurred by the Armed Forces of Ukraine for a long time, all the cards and all the reserves are laid out on the table …

For their part, the Russian troops under the command of General S. Surovkin have created a multi-level defense with a network of defensive positions, main, alternative and additional, within which they will try to destroy the forces of the Armed Forces of Ukraine, among which there are up to 10,000 military trained in the UK.

The Russian Vice Governor of Kherson announced a 24-hour curfew in a video message posted on Telegram. Kirill Stremusov said that the curfew is necessary “in order to protect the city of Kherson from terrorist attacks by the Armed Forces of Ukraine.”

Unbelievable how hard I have to carry Z media on my back.

This is not even 1/50th of the amount of footage I had available from Kherson/Donetsk since September. Many hours of footage left but twitter is 2:20 so I did what I could.

Stremosov repeated previous calls for citizens to leave the city of Kherson, arguing that convoys of Ukrainian vehicles had been seen in the frontline areas and that a storming of the city was possible.

As we recently reported, an American citizen living in eastern Ukraine, Gonzalo Lira, has warned of what he says will be the last Ukrainian attack. In particular, he stated: “Ukrainian forces of between 30,000 and 40,000 men are preparing to make a major offensive against the city of Kherson. The Russians are evacuating the civilian population from there because the Ukrainians want to raze it to the ground. But 100,000 Russians are already behind Kherson, waiting.

The Ukrainians will fight the last battles in Bakhmut and Kherson, but they no longer have the strength. The Russians entrenched themselves in Kherson. They allowed the Ukrainians to attack and then neutralized them with artillery. This is what they will do now“.

It is highly doubtful that there are “100,000 Russian soldiers” in the defense of the city, not even near the city, but rather for the defense of the entire Kherson region: a total of 40,000, perhaps 50,000 people were deployed in the area, and this number includes many conscripts without combat experience and members of the national guard of the Russian Federation.

In general, Ukrainians in this region are better trained, better armed and have better combat experience.

At the same time, the US announced that it is continuing a new $400 million aid package to Ukraine that includes, among other things, 1,100 Phoenix Ghost drones, 45 T-72 tanks from various sources, and 40 riverboats.

The Russians want their artillery and combat helicopters to have freedom of movement, in areas where they still have superiority and to which they owe their defensive successes from February to the present.

Of course, the Russians are also fighting “with their backs to the wall”: if they lose the city of Kherson, then the Zaporozhye region with a nuclear power plant, which the Kremlin absolutely does not want to lose, will be next under attack.