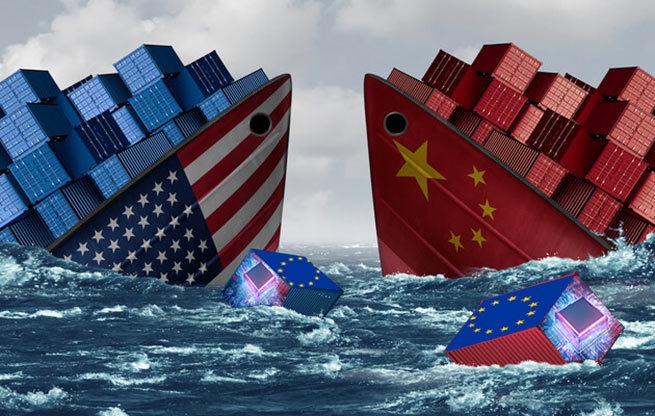 The United States is urging the European Union to impose a ban on semiconductor exports to China. After the energy impoverishment that the US caused in EUthey are now trying to cause technological impoverishment, however, with such assistants it will not be difficult …

Chinese officials doubt that the Americans, by simply asking, can convince the Europeans to abandon the highly profitable export market, but that’s what Russian officials thought at the beginning of the year.

Bloomberg reports that the Biden administration is urging the EU to tighten US restrictions on exports to China, similar to what the US and EU did to Moscow earlier this year. In other words, she calls to anti-China sanctions.

The announcement comes after Alan Estevez, U.S. Under Secretary of Commerce for Industry and Security, said on Thursday that the U.S. will soon sign an agreement with its allies to include new rules restricting China’s access to sophisticated technologies for chip production.

Doubters include Bai Ming, deputy director of the International Market Research Institute at China’s Ministry of Commerce Research Institute, who said the US call is unlikely to inspire the EU, which has a huge interest in Chinese semiconductor markets.

From the beginning of 2020 USA banned The Netherlands to export to China EUV equipment used to make high-tech semiconductor chips smaller than 22 nanometers. As a continuation of this step, in July 2022, the United States pressured to ASML Holding NV to stop selling its tooling to China. If this succeeds, China will not be able to produce most of the widely used semiconductors.

On October 7, the Bureau of Industry and Security (BIS) of the US Department of Commerce released a number of new restrictions prohibiting US companies selling high-tech chips and equipment for their production to China. Estevez, a spokesman for the US Department of Commerce, told reporters last Thursday that his team is seeking support from allies to impose a ban on the export of chips to China, and is also considering imposing restrictions on other types of technologies such as quantum computing, biotechnology and artificial intelligence. He said that an agreement covering technologies and tools for the production of chips will be signed between the US and its allies in the near future. However, he did not specify on what legal grounds such an agreement could be concluded.

The Bloomberg report says the US has proposed to its European allies that they impose export controls on China similar to those the Europeans have imposed to punish Russia for meddling in Ukraine. He cited anonymous people familiar with the situation as his source. Bloomberg reported that the EU is not ready to cut its exports so widely. However, one of the sources of the news agency said that there may be an opportunity to consider products that can be used by Beijing to strengthen its military capabilities.

According to the report, US Trade Representative Catherine Tai was scheduled to hold an informal meeting with EU trade ministers in Prague on Monday. Senior EU and US officials will also hold the third meeting of the Trade and Technology Council on December 5.

Some multinationals want to increase their investment in China but are waiting to see how China will retaliate against US sanctions. Bai of China’s Ministry of Commerce told media on Oct. 28 that the EU is likely not to repeat the US call to ban chip exports to China, given that the country is now the world’s largest semiconductor market and plays an important role in the global chip supply chain. Bai Ming said that the US, as well as the global economy, would suffer if Chinese chip makers were excluded from the global supply chain.

But, obviously, this is not of interest to the extremist circles that control the Biden administration. Their goal is, if necessary, to completely sever relations between the West, even with the rest of the planet, so that the US can maintain absolute hegemony, at least in Western societies. At the same time, they are absolutely not interested in the opinion of the allies, or how the inhabitants of Europe will survive. The main thing is to win…