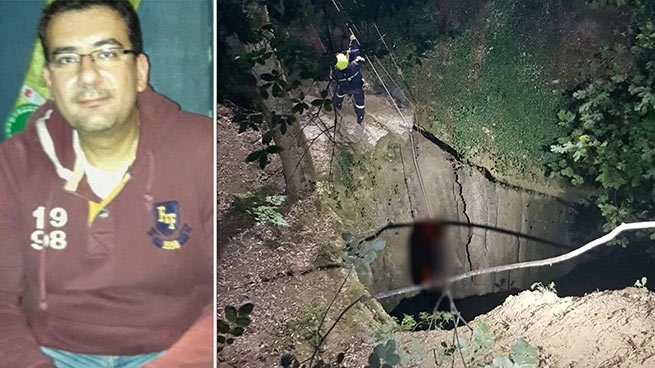 The search for a 40-year-old policeman who disappeared yesterday morning in Evrytania near the Tatarna bridge ended tragically – he was found dead in a karst funnel bearing the gloomy name “Tatarna Hole”.

Around 04:00 am on Saturday morning, a police officer who served in the West Attica security unit was discovered by rescuers, and his body was removed from the crater “Tatarna Hole”, in Trypotamos Evrytania.

Extraction of the body was especially difficult, as it was found at a fairly large depth. The 40-year-old’s car was found unlocked from yesterday, Friday, with his mobile phone inside, next to a crater by the road. The police officers who started the investigation were suspicious of the fact that traces were found in the opening of the funnel, as if something had slipped in there, and they alerted the fire brigade.

It is noteworthy that during the civil war of 1944-1949, more than 3,000 people from all over Western Greece were thrown alive into the Tatarna Hole. They were collected in the village of Halkiopoulos, and after a grueling painful transition through the mountains, the unfortunate reached the abyss. They were thrown into it alive, with their hands tied, under a hail of blows and curses from the guards. Their bodies are still in the bowels of the earth due to the huge depth and the release of a large amount of stones and building materials from the construction of a bridge and a road located nearby. The remains of the dead from time to time appear in Lake Kremasta, where they are carried by underground rivers.

Approximately in the same place, on the Tatarna bridge, traces of a 48-year-old woman from Karpenisi were lost a month ago. She went to Lake Kremasta in her car on 22 September. She was reported missing by a friend who told the police that the woman had expressed a desire to commit suicide. Her mobile phone and a handwritten note were found in the car. According to police sources, the missing woman reported domestic violence by her husband.

On Saturday, September 24, Greek Red Cross sonar found two patches on the seafloor, which were then examined by Coast Guard Special Mission divers, finding nothing associated with the 48-year-old man. Divers dived to a depth of 40 and 60 meters, and the complex underwater topography of the lake and very poor visibility in the water due to strong currents made their search especially difficult. A month later, the body of the missing woman was never found.