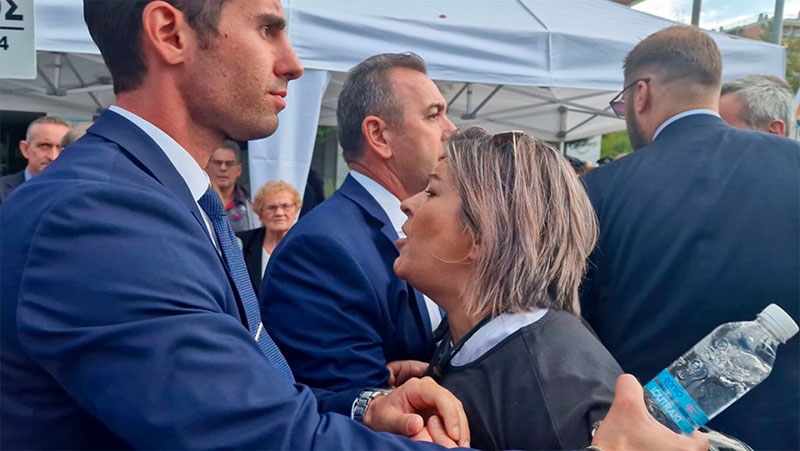 Three female unvaccinated medical workers protested against the suspension and managed to break through the “barrier” of the security forces, causing them to reach the place where officials were making statements after the end of the parade in Thessaloniki.

The female health workers came very close to the President of the Republic, Katerina Sakellaropoulou, as she made her habitual statements and started shouting slogans, demanding that they and all the unvaccinated health workers who were suspended from work and whom the government, with vindictive tenacity, does not allow to return to work, despite the fact that the pandemic ended and it was proved that mass forced vaccinations did not really help anyone, they were restored to their jobs.

The women shouted “shame!” and the Greek president pretended not to hear (after all, neither the government nor she is hard to do).

The indignation of the protesters was directed not only at the president, but also at the Minister of Defense N. Panagiotopoulos, who stood next to her and represented the government, which decided on their professional and financial destruction. It is noted that the president “signs the laws adopted by the parliament within a month after their adoption.” Publishing, i.e. By signing the law, the President certifies both the authenticity of the law and the observance of the established procedure (Section 42(1)).”

The women were removed when the police intervened, and two groups of medical workers remained at the parade site, Alexander the Great Avenue, continuing the protest with slogans under police supervision.

It should be noted that a few days ago, the Prime Minister of the Canadian province of Alberta, Danielle Smith, made a shocking statement in which she humbly apologized to those unvaccinated who were dismissed from public positions for discrimination against them: “I sincerely regret all those who were subjected to discrimination as a result of the vaccination regime. I deeply regret all those who were fired as a result of the vaccination and welcome their return should they wish to return.”

“What comes to my mind most are people who were arrested as pastors, people who were arrested or fined for not wearing a mask,” she added. “It’s not normal to get fined and prosecuted. So I’m going to look into the number of unpaid fines that are still there and get legal advice on which ones we can cancel and issue an amnesty.” This is a clear confession from a senior official of what is affecting millions of people around the world and thousands in Greece.

You need to understand that this is Canada – the Mitsotakis government cannot do this in principle.