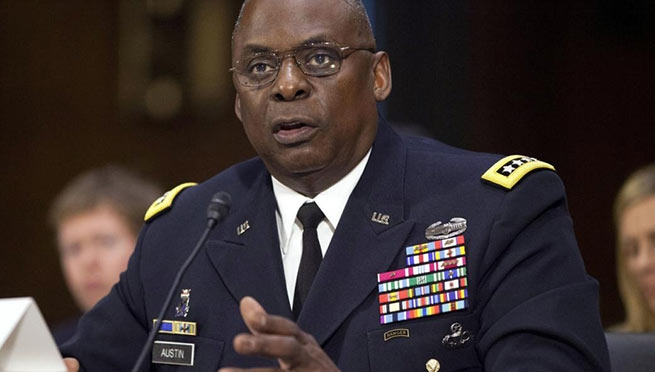 After many decades, the US is radically changing its nuclear doctrine to “Weapons Free”, which means it can use nuclear weapons whenever it sees fit, against whom they want and, most importantly, without a nuclear threat against them.

The Pentagon’s new national defense strategy has rejected previous restrictions on the use of nuclear weapons long advocated by arms control advocates and former President Joe Biden himself, and now they can also be used in preemptive first nuclear strike. In other words, the US officially becomes an aggressor state under the “cloak of democracy”, covered with a fig leaf narrative “We are the good guys.” And now America is ready to launch a nuclear strike, even if, according to Washington, its allies (including Ukraine) “are in a dangerous situation.”

Citing growing threats from China and Russia, the US Department of Defense said in a document released Thursday that “by the 2030s, the United States will face two major nuclear powers as strategic competitors and potential adversaries for the first time in its history.” In response, the US will “maintain a very high ceiling on its nuclear arsenal,” not excluding the use of nuclear weapons in response to a non-nuclear strategic threat to the homeland, US forces abroad, or allies.

At the same time, through the controlled Western media, the Americans are trying to create a collective unconsciousness in which Russia and its President Vladimir Putin are the “nuclear terrorists”.

During the 2020 presidential campaign, Biden promised to say that the US nuclear arsenal should only be used to deter or retaliate in the event of a nuclear attack, a stance that progressive Democrats bless and subdue defense hawks. Since then, the situation has changed dramatically, and a new Pentagon strategy has been developed in cooperation with the White House.

The nuclear report, which is part of a broader strategy, said the Biden administration reviewed its nuclear policy and concluded that a policy of “no first and exclusive designation would result in an unacceptable level of risk in light of a number of non-nuclear capabilities being developed and promoted by competitors, that can cause damage at the strategic level” to the United States and allies.

Mackenzie Eaglen, resident fellow at the American Enterprise Institute, said she was “surprised by how strong their position on nuclear modernization is and how strong the national security policy continuity is between administrations of different parties.” They are ready to put their far-sighted policies on hold in light of the harsh nuclear reality from China and Russia.”

President Vladimir Putin and other Russian officials have previously spoken openly about the possibility of using nuclear weapons in an intervention in Ukraine. But on Thursday, Putin said Russia was only “hinting” in response to repeated US-European discussions about a possible nuclear conflict. “We don’t need a nuclear strike on Ukraine – it makes no sense either military or political,” Putin said, speaking to an audience of foreign policy analysts during a forum in Valdai.

In a document that was written before the Russian intervention, the Pentagon claims that Russia continues to “use its nuclear weapons to support its revisionist security policy” and further growth of its modern arsenal is expected.

Meanwhile, China remains “the United States’ most consistent strategic competitor for decades to come,” Secretary of Defense Lloyd Austin said in a letter outlining a new defense strategy. He noted China’s “increasingly coercive actions to reshape the Indo-Pacific region and the international system in line with its authoritarian preferences” as it rapidly modernizes and expands its military. China wants to have at least 1,000 deliverable nuclear warheads by the end of the decade, the nuclear strategy document says, and says it can use them for “coercive purposes, including military provocations against US allies and partners in the region.”

The nuclear strategy paper did not specify which non-nuclear threats could trigger a US nuclear response, but the threats currently include supersonic weapons wielded by Russia and China, against which the US does not yet have adequate defenses. However, it spells out in the strongest possible terms what will happen to another nuclear power, North Korea, if it launches a nuclear attack on the US, South Korea or Japan: this action “would bring about the end of this regime.” US nuclear weapons continue to play a role in deterring a North Korean attack.

The nuclear strategy has confirmed modernization programs, including the ongoing replacement of the obsolete US air-sea-land nuclear triad. Among them are the Navy’s Columbia SLBM-class nuclear submarines, the replacement for the Minuteman III ICBM, the new Standoff air-launched long-range weapon, and the F-35 nuclear fighter jets for Europe. The review confirmed earlier reports that the Pentagon would retire the B83-1 gravity bomb and cancel the sea-launched cruise missile program. However, the review also supports a Trump-era naval weapon, the W76-2 low-yield submarine-launched nuclear warhead, which the authors say provides “an important deterrent to limited nuclear use.”

The broader strategic report also contains a mildly worded critique of major U.S. weapons programs that are often years behind schedule and billions of dollars behind original budgets. “Our current system is too slow and too focused on acquiring systems that are not designed to solve the most important tasks facing us now,” the Pentagon said. He called for more “open systems capable of quickly integrating cutting-edge technologies” while reducing “legacy” and costly problems.

The Pentagon strategy documents were sent to Congress in a classified form in March, so they were taken into account when it approved the defense budget for 2023.

However, in terms of the balance of power in nuclear arsenals, Russia remains the absolute dominant nuclear power in the world. And surprisingly, the extremist circles that control the Biden administration tend to believe that any US nuclear aggression will not lead to direct Russian nuclear strikes.