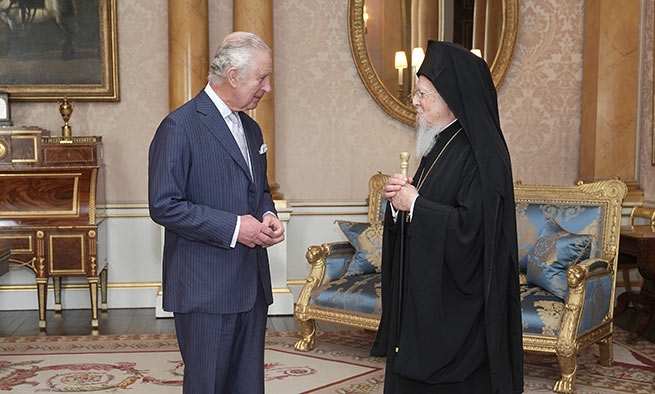 This afternoon at Buckingham Palace, His All Holiness Bartholomew I, the Ecumenical Patriarch was received by The King. pic.twitter.com/KJf4GVFzJP

The Ecumenical Patriarch was in London to attend the celebration of the centenary of the founding of the Greek Orthodox Archdiocese of Thyateira and Great Britain in 1922. Bartholomew presented to the British monarch Archbishop Nikita of Thyatira and Great Britain, as well as the metropolitans of Belgian Athenagoras and Theodoret of Laodicea.

Patriarch Bartholomew of Constantinople arrived in London on October 21, 2022. At Heathrow Airport, the Patriarch and the hierarchs of the Church of Constantinople who accompanied him were met by Archbishop Nikita of Thyatira and Great Britain, Archimandrite Niphon Tsimalis, head of the Archbishop’s Office, the Greek Ambassador to the UK, and a representative of the Turkish Embassy, ​​Orthodox Times reports.

Bartholomew’s visit to Great Britain is timed to coincide with the celebration of the centenary of the Diocese of Thyatira. During the visit, the Patriarch will meet with officials from England, as well as visit a number of parishes of the Patriarchate of Constantinople in London and diocesan charitable centers.

On October 21, Bartholomew I led a thanksgiving service at the Church of All Saints in the Camden area, and in the evening served vespers at the church of St. Nectaria in Battersea, south London. On October 22, Bartholomew made a pilgrimage to the stavropegic monastery of St. John the Baptist in Essex. In the monastery, he served the Liturgy and ordained one of the monks to the deaconate. Visit to the monastery of St. John the Baptist was the first for Patriarch Bartholomew since the Patriarchate of Constantinople glorified its founder, Archimandrite Sophrony (Sakharov, 1896−1993), as a saint. On the same day, Bartholomew led the evening service in the church of St. Demetrius in Edmonton, one of the largest parishes in the British capital.

On October 23, Patriarch Bartholomew celebrated the Liturgy at the Cathedral of Sophia, the Wisdom of God. He was co-served by the hierarchs of the Cypriot and Georgian Orthodox Churches. At the end of the service, the Order of the Archons of the Archdiocese of Thyatira gave a dinner in honor of Bartholomew at the Greek Cultural Center.

In the evening, the Patriarch attended a service in honor of the 100th anniversary of the Diocese of Thyatira, which was held in the Anglican Church of St. James in Sussex Gardens was performed by Jonathan Baker, Bishop of Fulham, Apocrysary of the Archbishop of Canterbury under the Patriarchate of Constantinople.

On the morning of October 24, the Diocese of Thyatira hosted a breakfast in honor of Patriarch Bartholomew for the religious leaders of London. Then Bartholomew visited the Temple of the Twelve Apostles in Herdfordshire. On the same day, the Patriarch had a meeting with Lord Tariq Ahmad, Minister of State for the Middle East, South Asia and the United Nations, and visited the Turkish Embassy in the United Kingdom.

On October 25, King Charles III received Bartholomew at Buckingham Palace. On the same day, the Patriarch returned to Istanbul.