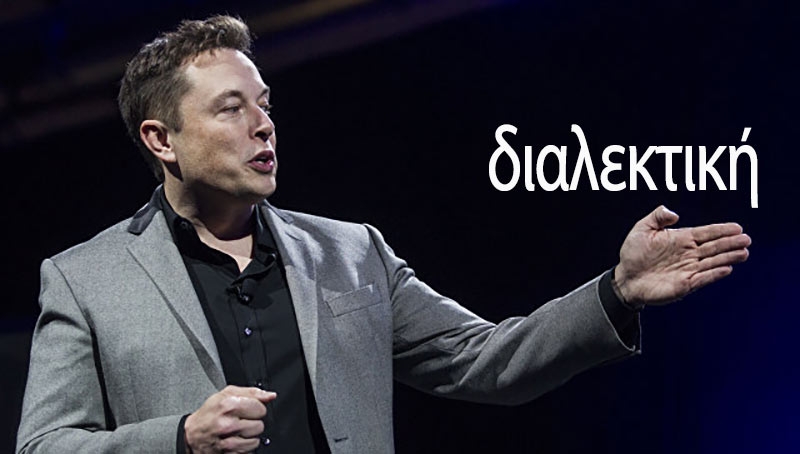 On Tuesday, Elon Musk tweeted just one word in Greek: “διαλεκτική”, which means “dialectic”, and sent millions of his followers on a dictionary search.

The richest man in the world who wants to buy Twitter has tweeted over 19,000 since joining the platform 13 years ago. This year, he tweeted an average of six times a day.

The cryptic post on his official profile had garnered more than 7,000 replies by Tuesday morning, as there appear to be many question marks about the meaning behind Musk’s choice of that particular word.

Dialectics (Greek: διαλεκτική), also known as the dialectical method, is a discourse between two or more people who hold different points of view on a subject but wish to establish the truth through reasoned argument.

In classical Greek philosophy, dialectics is a form of reasoning based on a dialogue of arguments and counterarguments, defending propositions (theses) and counterproposals (antitheses).

The term “dialectic” owes much of its prestige to its role in the philosophy of Socrates and Plato during the classical Greek period (5th to 4th century BC). Aristotle said that it was the pre-Socratic philosopher Zeno of Elea who invented dialectics, examples of the Socratic dialectical method are the dialogues of Plato.

Was Musk referring to the dialectic of the Twitter deal, or did he mean something about the war in Ukraine?

Some commentators have argued that Musk may be referring to the controversial and delayed acquisition of Twitter.

Tesla’s chief executive must meet the October 28 deadline to complete deal to buy Twitter for $44 billion, otherwise he will have to go to court soon after. Musk backed out in July, but as mid-October approached, he made a surprise U-turn and re-purchased Twitter.

Other commentators claim that Musk may have been thinking about the war in Ukraine. Earlier in October he proposed to end the war a proposal for which the “peace-loving world community” accused him of having links with Putin.

In a tweet, Musk suggested holding UN-monitored elections in four occupied regions that Moscow annexed after referendums were held there. “Russia will leave if it is the will of the people,” Musk wrote. He also proposed officially recognizing Crimea, seized by Moscow in 2014, by Russia, ensuring Crimea’s water supply, and maintaining Ukraine’s neutrality.

After that, Musk was declared an enemy of Ukraine and put on the “Peacemaker” execution list, and Ukrainian President Volodymyr Zelensky and his team sharply condemned his initiative. After thousands of trolls “ran into” Musk’s account, threatening the businessman and demanding his death, the owner of Tesla temporarily disabled Starlink over Ukraine. This slightly reduced the intensity of passions on the part of Ukraine, but led to problems for the businessman in the United States, where the authorities promised him “big problems.”