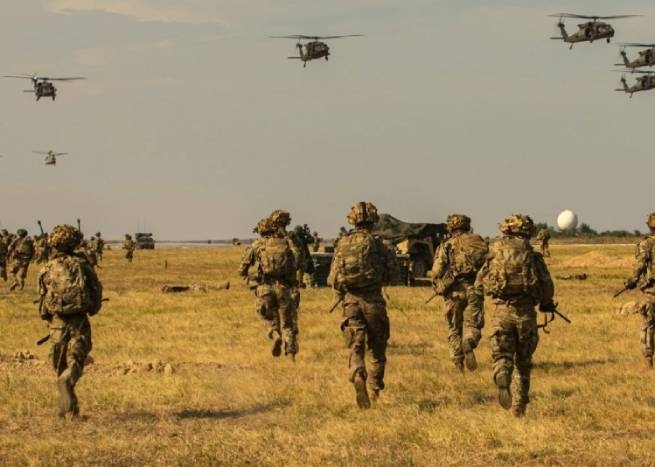 For the first time in 80 years, the US deployed the 101st Airborne Light Infantry Division “Screaming Eagles” to Europe. She is ready, if necessary, to cross the border with Ukraine.

The division, numbering 4,700 troops and trained to deploy on any battlefield within a few hours, arrived for the exercises, and the United States, placing it a few kilometers from the Romanian-Ukrainian border, thus sends a signal to Russia, writes CBS News. Journalists of the publication, together with the deputy commander of the division, Brigadier General John Lubas and Colonel Edwin Matthaides, flew to the place of deployment of the division in a Black Hawk helicopter.

The United States is confident that Russia’s goal is to leave Ukraine and its armed forces without access to the sea. This threat was the reason for sending one of the most elite US air assault divisions to Romania with some heavy equipment. General Lubas noted in an interview with reporters:

During the exercises, strikes were made on targets, and real ammunition was used for tank and artillery fire. The exercises should recreate the battles that Ukrainian forces fight every day against Russian troops. The publication notes that such a close location of military exercises to the Ukrainian border serves as a clear signal for Russia and US allies in NATO: the American army is nearby. Mattaides told CBS News that from his vantage point, he and his units are “closely monitoring” the actions of the Russians, “setting up targets for training” and conducting exercises that “exactly repeat what happens” in the war.

The commanders of the “Screaming Eagles” told the publication that they are “ready for battle even tonight” and are in Romania to protect NATO territory, and in the event of an escalation of hostilities or an attack on NATO, they will cross the border with Ukraine.

The 101st Division of the US Army is known for its active participation in the fighting on European territory during World War II, in particular, during the Allied landings in Normandy in 1944.

The US authorities have repeatedly stressed that US military personnel will not take part in hostilities on the territory of Ukraine. Earlier, US Ambassador to NATO Julianne Smith confirmed that NATO should not be directly involved in the conflict in Ukraine and the position remains unchanged.