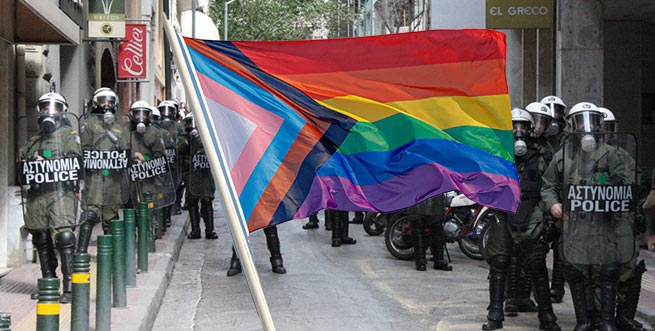 Transsexuals will now be “legally” accepted into the Greek police, which means the day is approaching when we will see “policeman Varvara” patrolling the streets.

This will not be a sex film, as the Ombudsman, in his opinion, ruled that “the exclusion of intersex people from admission to police schools on the basis of their intersex and without an individual examination of their general state of health and physical performance with an athletic test constitutes direct discrimination against such persons and violation of the principle of equal treatment regardless of gender identity in access to employment and work”, thereby paving the way for admission to police schools for transgender people.

According to the Greek Civil Code, “intersex is not a mental disorder”, that is, it is something normal and therefore … acceptable for a transsexual to serve in the Greek police. Of course, this conclusion is not limited to ELASit will be extended to all services of the security corps.

In conclusion, the justification of the police service that “transgender people by right, regardless of an individual study of their state of health and assessment of physical performance, cannot perform the duties of a police officer” is recognized as untenable. Thus, the Ombudsman believes that someone who was born “Anton” and wants to be “Antonia” does not hide any … suspicions of disorder.

An independent body ruled on the issue following a request from the Association for the Support of Intersex People to exclude such candidates from admission to the officer and sergeant schools of the Greek police.

In particular, in its appeal, the Association complained that “in the announcement published by ELAS in May 2018 on the competition for the admission of students to officer and police schools through the system of general examinations of the Ministry of Education, Research and Religious Affairs, candidates were excluded on the basis of gender identity.” The union argued in its appeal that the aforementioned exclusion of candidates constituted unlawful and unfair discrimination, in accordance with the Exclusion of Candidates Law 4443/2016, and demanded, inter alia, the lifting of the ban by the Ministry of the Interior and the Greek Police.”

“According to the updated, internationally recognized and applied scientific positions of the World Health Organization (WHO) and the American Psychiatric Association, and contrary to what is stated in Executive Order 11/2014, intersex is not a psychiatric disorder, a disability or a chronic illness. Already from 1 -1-2022, these WHO provisions contained in the “International Statistical Classification of Diseases and Related Health Problems – ICD-11” will be applied in Greece, and the country will report to WHO on their application.

The competent Greek Police Services did not provide sufficient justification, in accordance with the provisions of Law no. 4443/2016, article 4, par. 1, and their position that intersex people automatically and independently of an individual study of their state of health and an assessment of their physical performance cannot perform the duties of a police officer. It should be noted that candidates for police schools undergo an individual health examination and are assessed on physical indicators using established sports tests.

In the latest announcement of 11-2-2022 by the General Directorate of the Hellenic Police on the admission to the Schools of Policemen and Police Officers, as a prerequisite, the applicants are still indicated that the candidates are in good health and of excellent physique, as determined by the competent Health Classification Committee, in accordance with current provisions of PD 11/2014.

However, despite the scientific medical advances mentioned above, the PD has not been amended to include intersex, referred to as “gender identity disorder”, as a mental illness.

The exclusion of bisexual persons from admission to Police Schools solely on the basis of their bisexuality, without an individual examination of their general health and assessment of their physical performance using a sports test, constitutes direct discrimination against these persons and a violation of the principle of equal treatment regardless of gender identity in access to employment and work, as provided for by the provisions of Law 4443/2016 and Directive No. 2000/78/EU“.