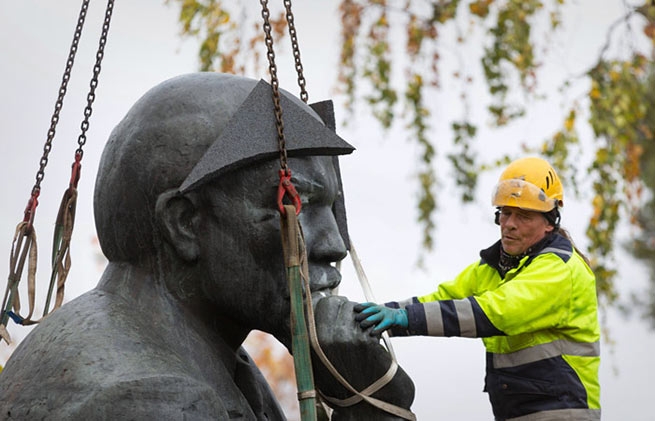 Finland’s last statue of Lenin was removed today from a city in the country’s southeast, where demolition of Soviet-linked monuments has increased following Russia’s invasion of Ukraine and the Scandinavian country’s NATO bid.

In Finland, in the city of Kotka on Tuesday, the country’s last statue of Vladimir Lenin was removed from public space. It is known that the sculpture was vandalized several times.

Finland removes last large Lenin statue – The Eastern Finnish city of Kotka removes a statue of Lenin from a public park in the city centre, near to a wooden house where the Bolshevik Party founder is rumoured to have stayed. -AFP pic.twitter.com/HmZbpaY8RU

The statue of Lenin by Estonian artist Matti Varik was received as a gift in 1979 from Kotka’s sister city Tallinn, which at that time was part of the Soviet Union. It was installed in the center of Kotka, on Kotkansaari North Park Street, and was part of the city’s art collection.

The Finnish edition of Yle notes that discussions about the dismantling of the monument intensified in the spring after the start of the Russian military operation in Ukraine.

The monument has been moved to the Kymenlaakso museum storage facility and the institution’s management is currently studying whether it will be used for exhibitions in the future.

Earlier, the authorities of the Finnish city of Turku dismantled another monument to Lenin. It has been moved to the museum. Turku received a statue of Lenin as a gift from Leningrad in 1977.

In Finland, the name of Lenin was associated with the granting of independence to the state, and commemorative plaques in a number of cities still remain in his memory.