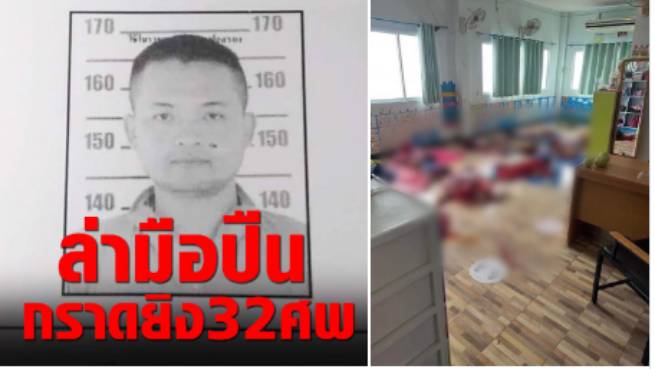 During a quiet hour in a Thai kindergarten, an armed former policeman staged a mass shooting, killing sleeping toddlers (from two years old) and adults present. He then killed his family, wife and child, and committed suicide.

It all happened in a pre-school institution in the North-East Province of Thailand, in the center of the city of Wutai Sawan, Nong Bua Lamphu Province. There were 30 children in the children’s center at the time. The gunman entered it at 12:30 p.m., during an afternoon nap, according to police and local authorities. Some of the victims were as young as two years old. Police said 34 people died, including 22 children. Before shooting himself, the ex-cop killed his wife and his child.

District official Jidapa Bunsom told Reuters the attacker first shot and killed four or five employees, including a teacher who was eight months pregnant, noting: “At first, people thought it was fireworks.”

Police said the assailant was armed with a shotgun, pistol and knife and fled the scene in a vehicle. The Daily News reported that after fleeing, the assailant returned to his home and committed suicide, killing his wife and child. Chakkraphat Wichitvaidya, chief of the Na Klang police station, told Thai Rath TV that the shooter was fired from the police force last year.

Prime Minister Prayut Chan-Ocha, writes The Guardianexpressed his deepest condolences to the families and victims: “I ordered the police chief to immediately go to the area, and the relevant departments to urgently help all the victims.”

Thailand’s gun ownership rate is quite high compared to other countries in the region, but the official figures do not include the vast quantities of illegal weapons smuggled over porous borders from conflict-torn neighbors over the years.

Mass shootings in Thailand, one might say, are rare. But in 2020, a soldier enraged over a real estate deal killed at least 29 people and wounded 57.