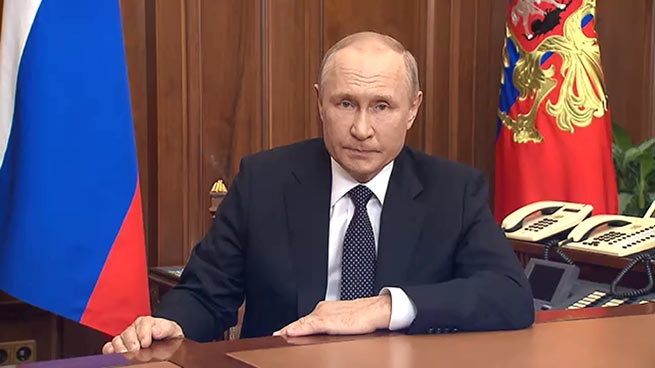 Russian President Vladimir Putin, in his speech, which was broadcast on the night of September 21, announced a partial draft into the army and said that the people of Donbass have the right to choose their future.

Speaking about the decision on partial conscription, which comes into force from today (9/21), Putin said that it only applies to those who are registered as reservists, and addressing those who are drafted into the army, he assured them that ” all the privileges enjoyed by all who already serve will be granted.”

He said that Western countries are trying to “block” any possibility of independence and development. “The intention of the West is to weaken and destroy us, they openly talk about it.”

Regarding the possible use of nuclear weapons, just before the end of his speech, Putin pointedly remarked: “TThose who threaten us with nuclear weapons must know that this threat can be directed against them. I’m not bluffing!“.

The Russian President stated that “Washington puts pressure on Kyiv to transfer hostilities to the territory of the Russian Federation“, and added that nuclear blackmail had been used, apparently referring to the Ukrainian strikes on the Zaporozhye nuclear power plant, controlled by Russian troops.

“Our main goal is the liberation of the people of Donbass. The army is fighting against Western operations on a front of more than 1,000 km in Ukraine. I support the decision of the residents of the Russian-controlled regions of Ukraine to hold referendums. We will discuss the steps that need to be taken to protect our sovereignty and support the will and desire of the citizens of Donbass to make their own decisions.“, Putin said.

The first reaction to Putin’s speech came from British Foreign Secretary Gillian Keegan, who called Putin’s decision on partial conscription “alarming escalation“, adding that threats to use nuclear weapons should be taken”Seriously“.

Russian Defense Minister S. Shoigu: about 300,000 reservists will participate in the partial draft.

Russian Defense Minister Sergei Shoigu said today that the decree on partial mobilization announced by Vladimir Putin provides for the recruitment of an additional 300,000 people to participate in the military operation in Ukraine. This is an additional force, significantly larger than the initial one, which began the operation in Ukraine on February 24, and is considered sufficient to solve all military tasks.

These additional forces show that Moscow will continue its operations in Odessa-Kharkov, not only because of the size of the forces it will use, but also because the two major Ukrainian cities are relatively close to Russian positions. In an interview with Russian state television, Shoigu explained that students and conscripts would not be drafted, nor would most of Russia’s one million reservists be drafted.

Western reaction to the referendum

The West is outraged by the plans of Russian speakers to hold referendums in four regions of Ukraine. European Commission President Ursula von der Leyen called Russia’s actions a flagrant violation of the UN Charter.

“An attempt to change the borders of Ukraine is completely unacceptable and is a clear violation of the UN Charter, independence, national sovereignty and territorial integrity of Ukraine“, – added the head of the Commission on the sidelines of the 77th UN General Assembly in New York.

Russia will bear”more serious consequences“if it continues to annex parts of Ukraine,” a senior US State Department official said yesterday (9/20).

“We have made it clear that there will be more serious consequences. We have a range of tools at our disposal.“said a spokesman for the US State Department, according to the Reuters news agency.

The message of German Chancellor Olaf Scholz was also kept in a strict tone. He stressed that Russian President Vladimir Putin would renounce his “andimperial ambitionswho risk destroying Ukraine and Russia if he admits he cannot win the war he started on February 24th.

At the same time, Liz Truss will use her first foreign visit as British Prime Minister to pledge billions of pounds in aid to support Ukraine next year, her office said, and will denounce China’s actions against Taiwan before addressing the UN General Assembly.

Truss promised the UN General Assembly to provide Ukraine with the same or more military aid (2.31 billion euros) in 2022 as it did in 2023, doubling support for Kyiv after the Russian invasion.

At the same time, she continues to argue that this will help Europe gain independence from Russian energy carriers. How exactly, Mrs Truss did not explain.