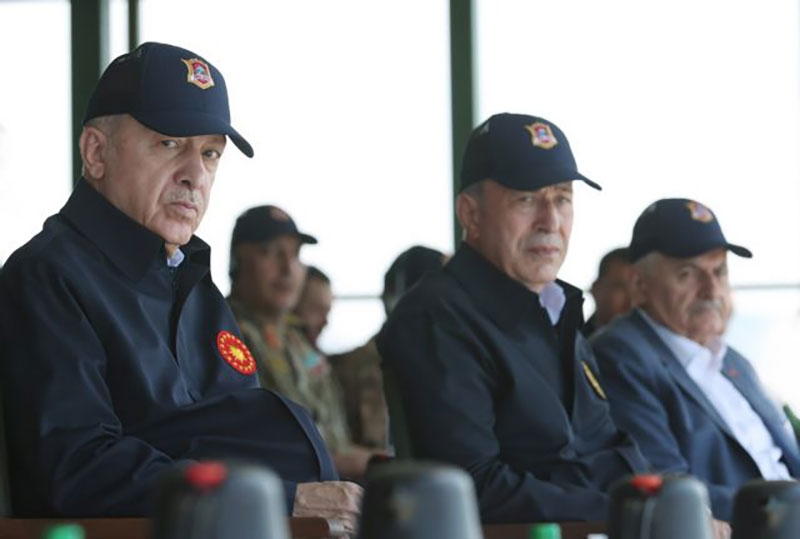 “The rhetoric of the Turkish president is becoming more and more aggressive, and now Erdogan is openly threatening a military attack. In a gradual escalation scenario, we are in the preliminary stages of a possible war,” DW reports.

The marginalization of Turkey in the Western media, as a symptom of its gradual drift away from the West, is mentioned in a DW article by ELIAMEP researcher Ronald Maynardus, who nevertheless leaves open the possibility that Erdogan’s increasingly aggressive rhetoric towards Greece is part of the preliminary stages of a possible war.

Preliminary steps
“The current crisis between Greece and Turkey is far from the situation in Ukraine. However, it should be noted that the rhetoric of the Turkish president is becoming more and more aggressive, and now Erdogan is openly threatening a military attack. In a gradual escalation scenario, we are in the preliminary stages of a possible war. It is worrying that the venomous rhetoric of the political leadership is being accepted by a significant part of the population, and this is having a negative impact. Voices calling for moderation and peace are hardly heard. In Turkey, the election campaign is in full swing: the opposition is partly trying to win votes with even more aggressive rhetoric“, he says.

Different points of view
Describing the climate in the media, the author notes that everyone who reads newspapers in Greece and Turkey these days will find completely different points of view: “In the pro-government Turkish media, Greece is the aggressor. In Greece, the opposite is true: for most Greeks, Erdogan – and only Erdogan – is escalating tensions“.

The article notes that on the front of international diplomacy, Greece has won the competition between the two countries to internationalize bilateral issues related to relations with EUNATO and USA.

“The EU, and more recently the US, are calling Erdogan to order. Even in the comments of major international newspapers, it is futile to look for publications supporting the Turkish position. This marginalization of Ankara in the Western media is a symptom of Turkey’s gradual retreat from the West. We are witnessing Turkey’s geostrategic reorientation, which has long considered itself an emerging regional power. In this version, which the majority of the population agrees with, Turkey’s national interests prevail over all other considerations. In this situation, the possibilities of the EU and especially NATO to convince Turkey to soften its policy are reduced. Peace in the Aegean – and this is the worst case scenario – could be the first casualty of Turkey’s break with the West. With his rhetoric, President Erdogan is already preparing the population for this event“, – says Ronald Mainardus.

“On the Knives of Greece”

Recall that from the TIF rostrum, Kyriakos Mitsotakis told Recep Tayyip Erdogan: “Stop hooliganism with Greece” (τα νταηλίκια με την Ελλάδα εοκ Greek-Turkish expression). The Prime Minister, speaking at TIF, spoke of Turkish provocativeness, noting, among other things, that Greece’s response to Ankara’s threats is “our vigilance, the strengthening of our armed forces, our prosperous economy, our international alliances, our commitment to international law and, above all, our unity.” He added: “There is only one Greek word for threats from the other side of the Aegean: ‘No’, Mr. Erdogan.” Kyriakos Mitsotakis emphasized, with an obvious personal hairpin to the Turkish president, in his own language: “τα νταηλίκια με την Ελλάδα εοκ” (“Stop hooliganism with Greece”).

Turkish provocations and the possibility of a “hot episode” in the Aegean Sea by Turkey were discussed on the air of “Mega Weekend” by Professor of International Politics Sotiris Sermpos and retired Major General Yannis Baltsoys. “Ankara has deliberately chosen a strategy aimed at maintaining tension. On the one hand, it threatens Greece, and on the other, it becomes its victim,” said Sotiris Sermpos, assistant professor of international politics at Democritus University. Further, the professor expressed the opinion that the President of Turkey would raise all issues related to our country at the UN General Assembly, believing that they “gained momentum” (“αέρα στα πανιά του).

When asked about Kyriakos Mitsotakis’s statement, retired Lieutenant General Yiannis Baltzois said that “τα νταηλίκια γιοκ με την Ελλάδα” (“Stop misbehaving with Greece”):”The actions of the armed forces are always determined by political directives, they seemed to feel a little freer from the restrictions that were placed on them. He said that the prime minister’s statement was extremely correct, but that it would have to “act in an atmosphere of strong determination for it to work. This is necessary in order to prove on the ground that we no longer accept hooliganism. Not letting them do what they have been doing and still“, – he continued, noting that he does not know practically how this can happen, but there are ways to demonstrate our determination.

Sotiris Serbos, researcher, Associate Professor of International Politics at the Thracian University of Democritus characteristically commented on the Prime Minister’s controversial statement: “He owed a response and put a red line on questions of national sovereignty“.