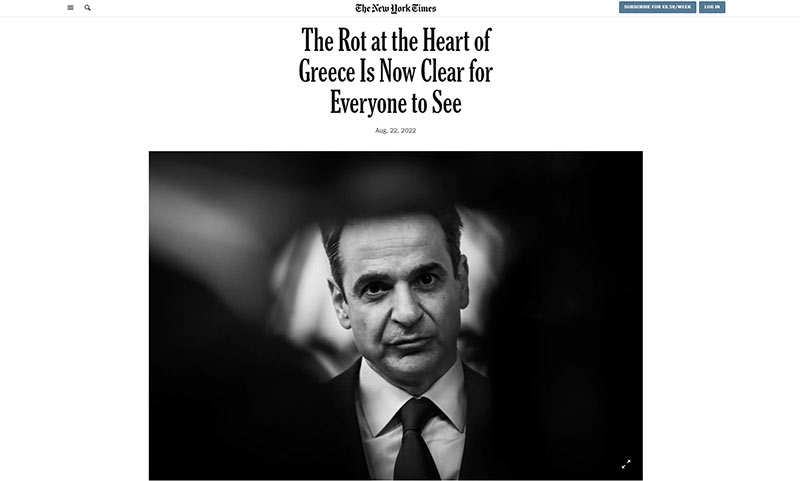 The New York Times’ extremely scathing criticism of the Mitsotakis government over the wiretapping scandal, which refers to “the rot in the heart of Greece,” caused concern and alarm in the government.

At the same time, government spokesman Yannis Ikonomou can talk about an “invited” columnist, that is, a freelance editor (!) of the NYT, but this is rather comical: how likely is it that the NYT published an article with which the editors of the newspaper do not agree!

“The corruption of the secret police and illegal surveillance are making international headlines,” was the reaction of the opposition leader to an article published on Monday in the New York Times titled “The rot in the heart of Greece is now apparent.”

The newspaper is the heart of the Washington Democratic establishment, and what it writes is seen as reflecting the views of the Biden administration.

Late Monday evening, the mood at the Prime Minister’s residence, Megaros Maximos, was heavy. After all, the article in the NYT was just the “crown” of 155 articles against the Mitsotakis government in the international press, in connection with the wiretapping scandal.

And let the pro-government media, these are five private channels and three newspapers favored by the authorities, indifferently ignore this news (let’s not forget that their owners are waiting for the distribution of a new financial package from Brussels, within which, according to the publication, Pronews 100 million euros are expected to be spent). But the heavy artillery of the international media is firing in large calibers: The Washington Post, Politico, Guardian, Euractiv, Liberation, BBC, BBC, Handelsblatt, Reuters, Associated Press, La Repubblica and many others lash out at the Mitsotakis government.

And the question is this: did his allies decide to “remove” their “man” Mitsotakis? Were they really that “touched” by the actual criminal acts that would be investigated? Indeed, in other cases, they simply ignored this.

But even in 2020, the then national security adviser A. Diakopoulos admitted that Oruc Reis conducted searches within the Greek continental shelf (when all the government and its mouthpieces claimed “there is no violation”), but they simply “resigned” and the case was closed. G. Herapetritus came out and said that “up to six miles from Kastellorion there are no problems.” And when “Oruc Reis“passed at a distance of four miles from the Greek coast, accompanied by half of the Turkish fleet, they said that “he made a safe passage”! And all is well!

What has changed now? Criminal actions then (granting national sovereign rights to the enemy), criminal actions now (illegal interception of communications of politicians and journalists). Why are they now “putting Mitsotakis against the wall”?

First of all, when we talk about a “hot article” like the one in the NYT, we must remember that it is the most influential newspaper in the world. And this is the newspaper of the Democratic Party, that is, the Biden administration. Therefore, when the NYT writes something, it doesn’t matter if it comes from a “freelance” editor, as G. Iconomou says, or … from a cartoonist, or any other editorial staff. This means that Washington has agreed.

That, a few hours after Kyriakos Mitsotakis’s celebration of the release from heightened surveillance in AP has an articlein which he referred to the tragic state of the Greek economy, of course, not by accident.

So will the government fall?

On the other hand, in the last 30 years, how many prime ministers have “retired” because “outsiders” decided to do away with them, right or wrong, while they had a majority in parliament?

Quite a bit of: Mitsotakis senior, Karamanlis, Papandreou Jr..

We’ll find out in a few weeks.