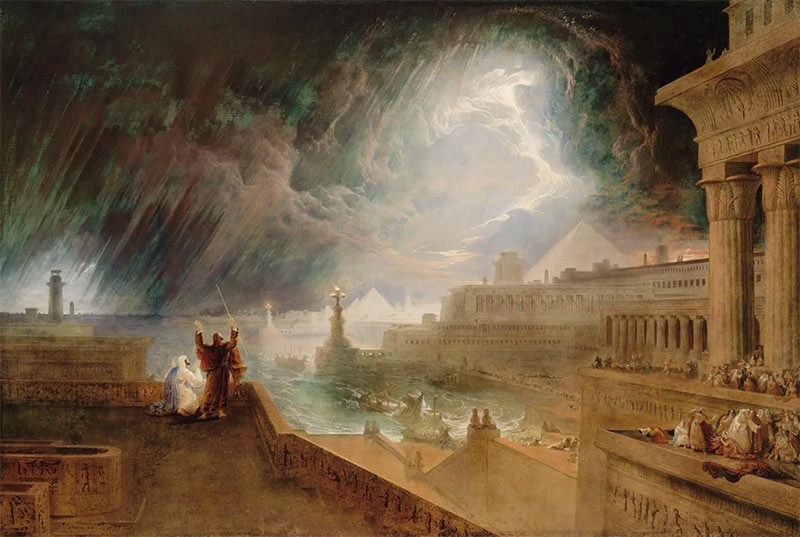 Almost two-thirds of Europe is on drought alert or warning as heat waves and low rainfall have limited river and lake navigation, power generation and crop productivity.

The above, combined with the blow received by the West, as well as Greece, due to the sanctions against Russia, portends an unprecedented economic disaster. A disaster which, of course, is the result of multiple executions reminiscent of ten plagues of egypt.

Primarily Covid-19. The epidemic, which seemed like a sci-fi scenario before its inception, is not only an epidemic as a disease, but all of its consequences, such as mandatory vaccinations with experimental vaccines, curfews, bans on gatherings and much more, as you all know.

Secondly, war in Ukraine. A war that took place at a crucial moment as the world was just about to reopen industrial plants that had been closed for two years due to covid-19. Of course, this would not have happened at the pre-pandemic level, but no one could have imagined how much damage this war caused to the world, which was the result of anti-Russian European sanctions, for example, hunger due to the lack of basic necessities (inflation), gas shortages and soaring prices for fuel.

Thirdly, as we said, there is famine, which is also the result of various factors, such as shortages of grain due to the war and Russian sanctions, as well as drought, which dries up everything that can be grown, and also freezes the transportation of all products.

Fourth – poverty, which, especially in our country, “has reached the red line” because, in addition to the misfortunes of all previous years, the Western economies are now drowning from inflation and deficits. Because in the end what matters is what a person has, and not whether he has “paper” to buy it. Indeed, a survey conducted in our country showed that at least 3 out of 10 Greeks live in poverty.

Demonstrations are taking place across the European Union against the rising cost of basic food and energy. It should be noted that four European governments have already “fallen” because of their policies on the pandemic and Ukraine.

Fifth, drought. And although the government and the pro-government media are trying to portray Greece as… Switzerland, the numbers show the real state of affairs. Of course, among the problems number one is the drought of rivers, which are the main supply channels in EU.

As for the European Drought Observatory (EDO) drought report, which is curated by the European Commission, it says that 47% of Europe is on drought alert, with very low soil moisture, and 17% is on alert due to for the destruction of vegetation.

“A severe drought has hit many regions of Europe since the beginning of the year, and since the beginning of August it has become even more intensified and worsened,” the report says. Summer crops have been hit hard, with 2022 corn yields expected to be 16% lower than the previous five-year average, and soybean and sunflower yields down 15% and 12%, respectively. Hydroelectric power generation was also affected, further impacting power producers due to lack of water to supply cooling systems.

Low water levels hinder navigation on rivers and lakes, such as the Rhine, and lower shiploads affect the transport of coal and oil.

At sixth, coming cold weather due to lack of gas in Europe. Tellingly, German Finance Minister Robert Habeck recently said that Germany (a country independent of our economy) is heading towards a gas shortage, which means that some industries will be forced to stop production and lay off workers. Some regions will lose entire industrial complexes, supply chains may collapse, people will go into debt to pay their heating bills, they will become poorer.

seventh are fires that have scorched unprecedented swathes of European territory this year as Western Europe has been in a firestorm all summer, with multiple fire flares in recent days in France, Spain, Croatia and Portugal amid a heatwave.

Eighth, this is an unprecedented plan by the European Commission, which approved the use of crickets, worms and grasshoppers as food for European citizens to counter the reduction in agricultural production caused by its sanctions against Russia!

tenth, it’s thick darkness. Already now in our country, electricity prices have become unaffordable, and people are not able to pay for them. In fact, instead of lowering taxes, the price of electricity has doubled, and for businesses by 8-10 times, but the government has also introduced a new tax for everyone, which is an attempt to reduce consumption in anticipation of winter! Every second Greek household is unable to pay its electricity bills and is already in debt to suppliers.

Nevertheless, we stubbornly support the United States in their desire to destroy Russia, already realizing that in this war, not only Ukraine, but also the European Union will be the loser, and our overseas partners will receive all the benefits and preferences.