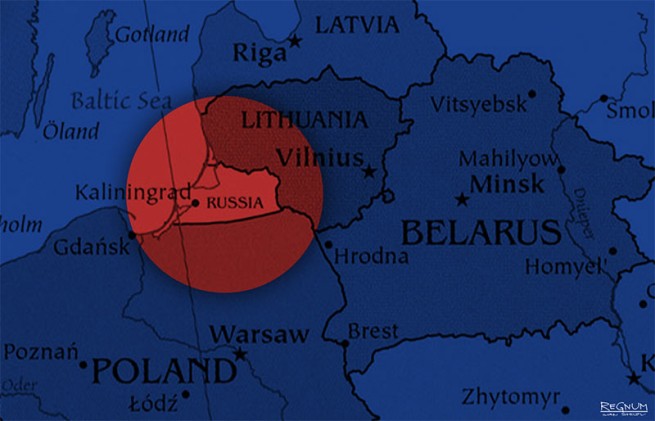 Lithuania has closed its territory for the transit of Russian goods to Kaliningrad and refuses to comply with previous transit agreements. The situation was not moved even by Josep Borel’s demand that sanctions be inapplicable to this case.

Chinese edition Xinhua believesthat what is happening could further worsen Moscow’s relations with NATO and EU.

On June 25, Lithuanian President Gitanas Nauseda announced that he would not compromise with Russia on the issue of transit traffic. The Lithuanian government has recently blocked overland routes for the transportation of Russian cargo through its territory to the Kaliningrad region, which caused strong opposition from Moscow. Russia has said it will take retaliatory measures.
The crisis in Ukraine is not over yet. The “blockade” of Kaliningrad by Lithuania undoubtedly exacerbates the situation in the field of regional security. What is the purpose of these Lithuanian actions? How will Russia react?

Kaliningrad has been called a “Russian enclave” that receives goods and energy from other regions of Russia via rail and gas pipelines. The only rail route between Kaliningrad and other Russian regions passes through Lithuania. On June 19, the governor of the Kaliningrad region, Anton Alikhanov, said that Lithuanian Railways had previously notified the Kaliningrad Railway Administration that from June 18, the transportation of certain goods from other regions of Russia to Kaliningrad through Lithuania would be limited. This is due to the introduction by European countries of sanctions against Moscow.

Lithuania was originally one of the most anti-Russian countries in Europe. After the crisis in Ukraine escalated, it followed the United States in imposing sanctions on Moscow, which contributed to heightening tensions in bilateral relations. This time, Lithuania openly provoked Russia by imposing a ban on the transportation of goods, which caused strong discontent from Moscow. According to the Russian Ministry of Foreign Affairs, on June 21, EU Ambassador to Russia Markus Ederer was summoned to the Foreign Ministry to demand that Lithuania immediately resume transit cargo transportation to Kaliningrad, otherwise retaliatory measures will be taken.

The ban on the transportation of goods will greatly affect the economic development of Kaliningrad. Alikhanov noted that the goods covered by this ban include coal, metals, construction materials and goods related to advanced technologies. According to his forecast, this will affect 40-50% of rail freight.

The Russian side recently announced that Lithuania has expanded the scope of the ban on the carriage of goods – now, in addition to rail transport, road transport is also prohibited. After the escalation of the Ukrainian crisis, NATO countries have effectively closed their airspace to Russia, so at the moment the only available way to transport goods to Kaliningrad is by sea via the Baltic Sea from St. Petersburg, located in the east of the Gulf of Finland. Since the efficiency of maritime transport is much lower than that of rail, Kaliningrad will not only face shortages of goods and rising prices, but also a series of chain reactions, such as the suspension of construction work, rising unemployment, and so on.

See also Guancha: “Are they really that crazy to blockade Kaliningrad”?

Anti-Russian attitude as a way to please America

An important reason why Lithuania is using Kaliningrad as a “trump card” to provoke Russia is that this city is of strategic importance to it.

Kaliningrad is located on the eastern coast of the Baltic Sea and goes deep into Europe. The region borders Poland in the south and Lithuania in the east and north. The special geographical position of Kaliningrad allows you to simultaneously hold the sea and land channels from Central and Western Europe to Russia, so the city is of great military importance and serves as the headquarters of one of the four main Russian fleets – the Baltic. In response to the threat posed by NATO’s eastward expansion, Russia has constantly reinforced the defenses of the Kaliningrad region, where it has deployed the S-400 anti-aircraft missile system and Iskander missiles capable of carrying nuclear warheads, as well as deployed stationary launch sites. In 2021, Russia considered the possibility of deploying Kinzhal hypersonic missiles with a range of 2,000 kilometers in the Kaliningrad region. After Finland and Sweden applied for membership in NATO, the strategic importance of the region increased even more.

For several decades, Kaliningrad was closed to foreigners as a militarized area. In 2018, the city co-hosted the FIFA World Cup, bringing it gradually into the public eye. Now Kaliningrad is a growing tourist destination. In addition, it is one of the special economic zones that attract foreign investment with low tariffs. In the Kaliningrad region, fishing, animal husbandry, mining and processing of amber are relatively developed.
For a long time, Russia viewed Kaliningrad as a “trump card” to deter the Baltic states and other neighboring NATO members. After the escalation of the Ukrainian crisis, the three Baltic countries – Lithuania, Estonia and Latvia – supported Ukraine. Lithuania has repeatedly appealed to NATO with a request to increase its military presence on its territory.

Some analysts believe that Lithuania views the Ukrainian crisis and the upcoming NATO summit as “opportunities” in an attempt to increase provocations against Moscow and exaggerate the “Russian threat” in order to please the interests of the US military-industrial complex and facilitate the permanent deployment of NATO troops on its territory.

On June 21, the Russian Baltic Fleet completed a week-long large-scale exercise in the Kaliningrad region, in which about 60 ships, more than 40 aircraft and a thousand military personnel took part. According to some analysts, this was only a “prelude” to Moscow’s response to Lithuania’s open provocation.

In response to Lithuania’s actions, Secretary of the Security Council of the Russian Federation Nikolai Patrushev said that the country would fight back. Several Russian departments are jointly discussing the measures that will be introduced in the near future.

With the Ukrainian crisis still ongoing, experts believe that Russia is unlikely to launch a new theater of war. In the current situation, Moscow can take political, diplomatic and economic measures towards Lithuania, such as a complete cessation of energy supplies and withdrawal from the border agreement with Lithuania signed with the European Union.

Given Lithuania’s status as a member of the EU and NATO, the risks facing Russia’s relations with the North Atlantic Alliance and the European Union have increased dramatically. First, the situation is complicated by the deterioration of relations between Russia and Europe due to the Ukrainian crisis. The retaliatory measures that Moscow intends to take may affect not only Lithuania, but also the interests of the entire European Union. In Europe, the big concern is whether Russia will send troops to control the Suwalki Gap and cut ties between the Baltic states and the European Union. The Suwalki Corridor is a long and narrow strip located between Kaliningrad and Belarus, which is the only overland route between the Baltics and other EU member states.

Secondly, the risks of a military conflict between Russia and NATO have increased. Andrey Klimov, Deputy Chairman of the Federation Council Committee on Foreign Affairs of the Russian Federation, said that by organizing a transport blockade of Kaliningrad, Lithuania “knocked out the chair” on which it sat as a member state of the European Union. This causes uncontrollable risks of hostilities between Russia and NATO.