Dozens of believers gathered in the courtyard of the Ecumenical Patriarchate in Istanbul on Maundy Thursday to get some fresh holy myrrh (Άγιο Μύρο*) on cotton wool, consisting of 57 ingredients from all over the world, including extremely rare ones.

The ritual process of preparing the holy myrrh took place at the beginning of Holy Week in the canopy of the Ecumenical Patriarchate, the ritual is performed once every ten years. Holy myrrh is a concentrated aromatic oil made from 57 aromatic substances, including rare, plant and animal, and symbolizes the gifts of the Holy Spirit. The Greek Orthodox Church uses aromatic oil to bestow the grace of the Holy Spirit on those who are baptized.

Myrrh – in Christianity, a specially prepared and consecrated aromatic oil used in the sacrament of chrismation to anoint the human body. In Orthodoxy, it is also used during the consecration of a newly built temple, for anointing the antimension, throne and walls.

By tradition, on Palm Sunday, the Ecumenical Patriarch awards gilded service crosses to myrrh-streamers, who will prepare the Holy Chrism on Palm Sunday. The next day, Holy Monday, the patriarch lights a fire under copper cauldrons. Ten world-bakers stir aromatic ingredients of plant and animal origin in copper cauldrons donated to the patriarchate in 1807 by the seraphim (silver craftsmen) of Istanbul.

Among the ingredients are two extremely rare animal materials: ambergrisalso known as “treasure of the sea” or “floating gold”, and musk of animal origin.

gray ambergris obtained from gastric contents – vomit – indigestible parts of the diet of sperm whales, and musk obtained from the glands of male musk deer in Tibet.

Holy Myrrh is a fragrant composition, numbering, according to various sources, from 35 to 75 elements, including: oil, white grape wine, styrax; incense – dewy, plain white and black; mastic, sandarac, pink flowers, basil herb; roots – violet, white, ginger, galangal, cardamom; thick nutmeg oil, Peruvian balsam, Venetian turpentine (turpentine); fragrant oils – bergamot, lemon, lavender, clove, Bogorodskaya herbs, rosemary, lignirhodia, rose, brown, marjoram, orange and nutmeg liquid; myrrh, crushed marble, etc. The abundance of the elements that make up the world symbolizes the diversity of Christian virtues. (Note: the origin of some of the listed and not listed components of the holy world is unknown today. Nevertheless, the rite of chrismation performed in the Russian Orthodox Church implies the use of the composition of components as close as possible to the ancient samples.)

Only the apostles themselves brewed and consecrated the myrrh for the performance of the sacrament, and a little later the right of chrismation was given to the bishops appointed by them. Those, in turn, began to send the brewed myrrh to the priests who used it in the performance of the Sacrament of Chrismation. Miro began to be prepared according to the model of that fragrant composition, with which in the Old Testament era kings and prophets, as well as priests for the Jerusalem temple, were anointed. 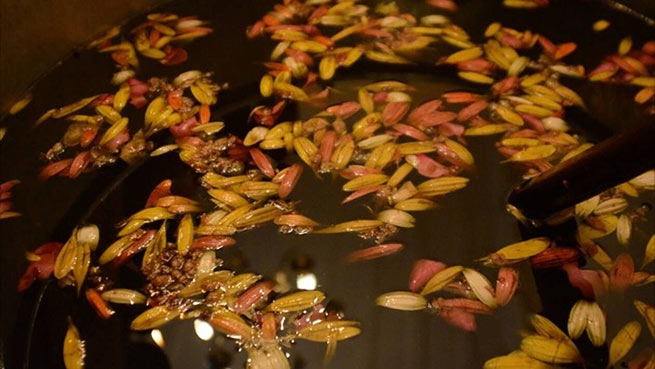 57 ingredients
Giorgos Savvich told the state-run news agency amna that this year the official recipe from 1890 was used to make Holy Peace.

“There are 57 ingredients in this formulation, mostly drugs. Medicines are components from various plant tissues. These may be roots, flowers, bark, seeds, bulbs, roots, gums, resins, and various other components derived from plants or shrubs, trees, or flowers. Preparations for this year started around the beginning of March with the ordering of the ingredients to be used,” Savvich said. 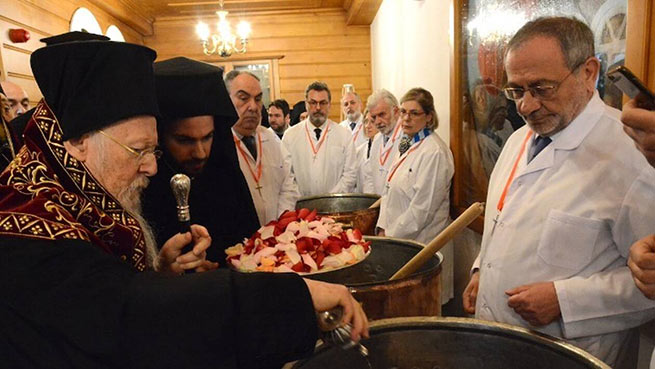 According to the chief peacebearer, not all of these ingredients can be found in one country or in one part of the country, and therefore they are ordered from different countries.

“There are some ingredients that can’t be found because they don’t exist. For example, one substance that we will not be able to find this year, but that we will use from the stock left over from the previous baking in 2012, is ambergris. For future baking and if this ingredient cannot be found, a substitute of the same quality can be used.

Another rare material that we also did not find this year and will use as a plant substitute is musk, which is obtained from the gland of a deer species that lives in Tibet and is apparently endangered. “I happened to meet a dealer in this substance who sold it for $ 250 per gram. About 50 grams of musk is used for holy peace, Savic said. – Many of the materials with rare ingredients are still plentiful and still on the market. for example incense, which comes to us from a sponsor in Crete and comes from a plant called incense (Cistus creticus/pink rock rose, its Latin name). However, this species has begun to decline significantly in Crete. On the contrary, the Spaniards cultivate it in their own country, avoiding its extinction in nature.” 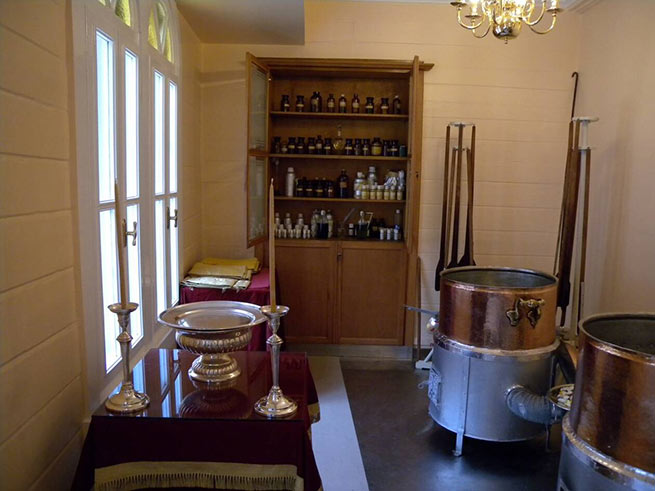 The process of preparing the holy myrrh

The day before the beginning of the process of baking the holy myrrh, on Palm Sunday, the Ecumenical Patriarch blesses the peacekeepers, awarding them with official crosses. The process begins on Maundy Monday and ends on Maundy Wednesday, and on Maundy Thursday it is consecrated, processed and placed in the Myrrh stream of the Patriarchate.

Initial preparations begin in March, when extracts are made from various herbs purchased from the Egyptian market in Istanbul. The extracts are filtered and added to the holy myrrh on the first day of its preparation.

“After preliminary work, that is, cleaning and checking the equipment used, the baking process begins, early in the morning of Great Monday, in the Patriarchal Canopy, an elegant wooden pavilion next to the Patriarchal Church of St. George.

On Great Monday, the Ecumenical Patriarch, after the service of the Most Holy Theotokos, sprinkles materials and utensils with holy water, lights a fire under the cauldrons. 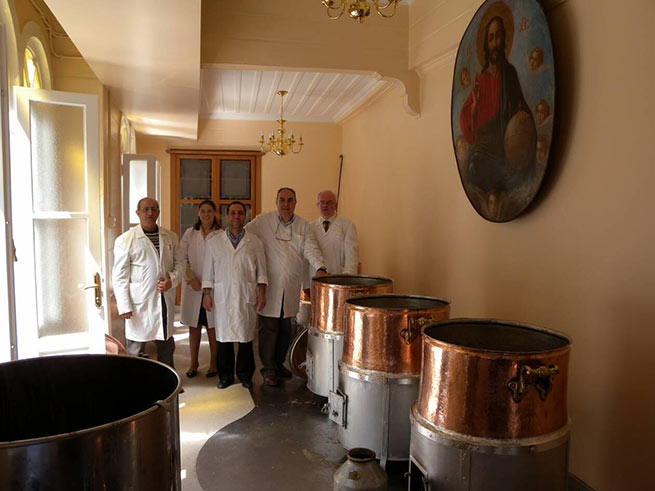 To kindle the fire, old church documents are used, as well as damaged books and icons that have no historical and artistic value. They are sorted by priests who specialize in the history of church art.

Throughout the entire process of preparing holy chrism, that is, from Great Monday to Holy Wednesday, the Patriarch, bishops and clergy alternately read the chapters of the Gospel and passages from the New Testament.

Usually seven heated copper vessels/cauldrons are used for brewing, giving 400-500 liters of holy myrrh with each cooking. Only four of the five were used this year because there is a supply of holy myrrh from previous preparations.

Under the kettles, a constant temperature is maintained to avoid damage to certain ingredients when overheated. 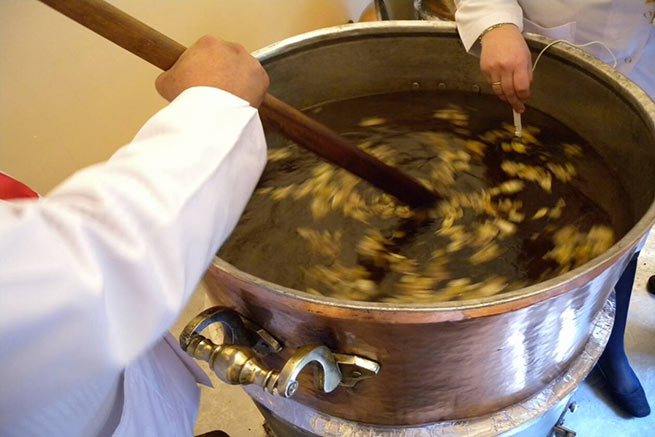 On Maundy Monday, the patriarch first pours olive oil and wine, followed by flower water, rose water and extracts of various plant origins, which are mixed over time with traditional large wooden spoons. Toward evening, the movement stops, and the fire almost goes out.

On Maundy Tuesday, the patriarch adds seasonal flower petals to the cauldrons. The procedure is stopped from noon until the morning of Holy Wednesday, until it cools down sufficiently. Essential oils are added to Holy Wednesday after the contents of the vessels have cooled and reached a temperature of 25-30°C. They are placed after cooling, because when heated they evaporate. Rose oil, which is the main aromatic ingredient of myrrh, is added by the patriarch to Holy Wednesday. 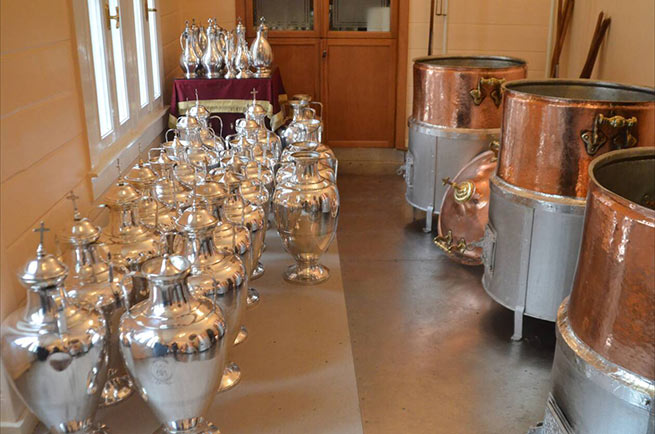 Immediately after the process of adding and mixing with wooden spoons, the filtration process begins. After it, the holy myrrh is placed in silver amphoras and vessels.

On Maundy Thursday, after the consecration in the Patriarchal Church of St. George, the priests in pairs, holding one amphora in their hands, carry the holy chrism to the Μυροφυλάκιο – the repository of the holy worlds – of the Patriarchate.

Agios Miros sent at the request of the Greek Orthodox dioceses. The holy ointment is distributed all over the world to be used at baptisms and at the consecration of the Throne at the opening of churches. It is also used during the Sacrament of Christ by Christians of other denominations who accept Orthodoxy. In the past, when there were Greek Orthodox kings and emperors, it was used during coronation ceremonies.