Well-known e-commerce company Skroutz is facing serious consumer complaints regarding the purchase of products that were not delivered despite having been paid for.

Trusted by hundreds of thousands of people in Greece and other countries over the years, Skroutz has found itself in an extremely uncomfortable position as the allegations make it clear that the platform has lost customer confidence, according to the financial publication. FROM.

The reason was the company’s policy to act as a Marketplace, which eventually led to the fact that small “online” stores under the auspices of Skroutz began to deceive their customers. Consumers generally did not suspect Skroutz of fraud because the company has earned a good reputation over the years of activity, it is known and trusted as an online store promotion company. For example: in the scam verification system www.scam-detector.com/ Skroutz has a maximum rating 100.

Now, angry consumers are talking about Skroutz’s attempt to cover up the scam and alleging abusive tech support behavior and unwillingness to cooperate.

“Skroutz support is stealing money,” writes one consumer. “Scammers can hide behind the Marketplace. “#cancel _Skroutz,” says another. 365shop, which worked with Skroutz, took orders for months, and now everyone in charge has disappeared. “Although there were seemingly negative reviews about the scrowz, he did not publish them, giving the scammers time,” complains another commentator. “Skroutz support summarizes. In conclusion, by clicking on the store through skroutz, you are completely unprotected, ”the victim writes.

The complaints seem to number in the hundreds and relate to 365 SHOP GR ΜΟΝΟΠΡΟΣΩΠΗ Ι.Κ.Ε (Private Company with Single Owner), known as 365shop, with which the famous Skroutz platform has had a strategic partnership for many years. According to many Greek forums, the company received orders saying that it would deliver the products within 4-10 days, but many of the goods never reached the buyer.

A video posted on social media by one of the deceived consumers describes his story. According to the young man, he ordered a TV from the 365shop online store, through a system that is inside Skroutz. The young man emphasizes that he would never have made the corresponding purchase if it were not Skroutz, and for this reason he now negatively evaluates and condemns the platform.

The story he describes concerns a purchase he paid for but never received. “365shop” eventually closed its page and “departed” from Facebook without answering calls from the buyer. Appeals to Skroutz did not help him either, and the only thing he was advised was to sue, that is, to spend more money (in particular, on lawyers), even if he wins the dispute regarding the purchase of the TV.

After the video was published, it turned out that dozens of consumers were already among the victims, who were deceived when they bought through Skroutz from this online store. In fact, with the tacit approval (or inattention) of Skroutz, 365shop sold several hundred thousand euros worth of “air” to hundreds of consumers across Greece and then disappeared. 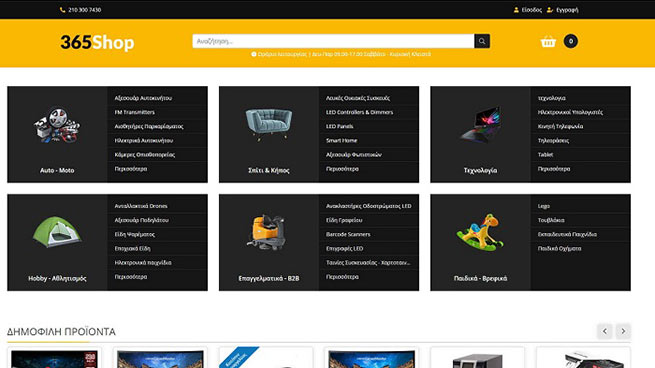 Hundreds of consumers across Greece are reported to be suing the scammers. In the process of the scandal, Skroutz herself also got it. Many of the company’s customers stated that the company committed indecent acts towards consumers. There were cases when the goods never arrived, or a customer bought a mobile phone and received stones in the package, and many times there were stories when Skroutz said that delivery was free, but customers had to pay extra.

Despite the fact that this is a fraud against consumers who paid with a card but never received the goods, Skroutz, in fact, disclaims responsibility. In a statement released following the incident, Skroutz is trying to apologize for its partner 365shop for the collaboration it has been strongly supporting in the recent past.

The announcement, after mentioning the termination of their cooperation, gives advice to deceived consumers and tells them how to claim compensation by providing them with consulting services.

AT statement Skroutz says the following:

Regarding the incident with the company 365 SHOP GR ΜΟΝΟΠΡΟΣΩΠΗ Ι.Κ.Ε. 365shop, which has become famous in recent times and has always been true to our vision to bring the best experience to consumers. We announce that our cooperation with this store is finally terminated.

Please note that Skroutz does not mediate purchases between a consumer and an online store, nor does it represent or replace any commercial store, except for orders placed through the Skroutz Marketplace service, where the transaction is securely completed on our page.

In addition, we have already contacted each consumer who informed us about the non-fulfillment of his order, and we advise on the compensation procedures for each of them individually. As we constantly receive new inquiries, we process them with due diligence and, if necessary, advise consumers on the next steps.

In particular, consumers who choose to pay for their order by card (debit or credit) may receive a refund of the full cost of their order from the card issuing bank through the transaction dispute procedure.

All those who have made a purchase via bank transfer, in the context of ensuring the best online shopping experience, will be compensated in the form of a coupon equal to the value of their order through the Skroutz Marketplace.

Finally, we remind you that for online purchases, card payment remains the safest payment method as it is the only way to guarantee a full refund.

In addition, we would like to emphasize that it is very important that all consumers who encounter a problem with their orders through this company file a complaint for the problem to be resolved by the competent authorities with whom we are in constant contact.

PS Being to some extent a person who understands online stores, the author of the publication notes that in the current situation, the blame lies entirely with the Skroutz management, which was inattentive to security issues when working (with key!) Partners (traditional Greek indifference). Or a mole (financially interested and quite high-ranking) wound up in Skroutz, an employee who did not report the facts of fraud and did not transfer information to the company’s security service.