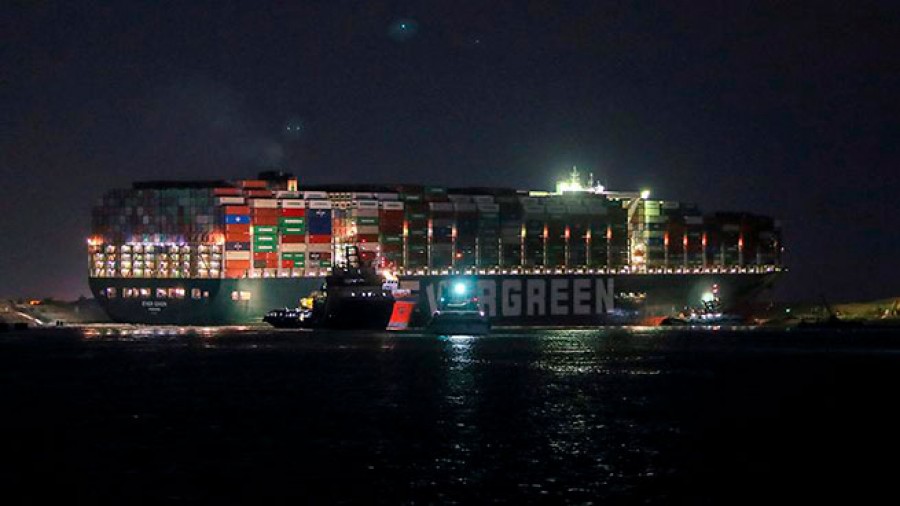 The first positive news comes on Saturday from the Suez Canal, which was blocked by the giant container ship “Ever Given” since Tuesday.

In particular, attempts by tugs to yank the ship allowed the stern to budge, its rudder and propeller working again, said Suez Canal Authority Director Osama Rabia, but he still does not know when the ship will be floated. According to him, today’s shift of the ship is only the first step, the very beginning of the process.

Another attempt will be made on Sunday morning, according to three sources familiar with the situation. To separate the ship, it is necessary to remove tens of thousands of tons of sand in the area of ​​its bow. By Friday, the dredgers had removed about 20,000 tons of sand around the bow of the ship, but this did not help, and another attempt was postponed to Sunday.

At 18:00 local time, more than 320 ships gathered at the entrance to the Suez Canal. According to Lloyd’s List evaluation, each hour of channel downtime costs the global economy $ 400 million.

There are now 14 tugboats involved in the fight to remove the container ship Ever Given, and as the president of the Suez Canal Authority noted, “progress has been made throughout the operation,” which he described as “a complex and difficult process.” In parallel with this, dredgers are working in the water area near the ship, and large rescue companies are involved in the activities of the detachment.

There are more than 20 thousand 40-foot sea containers on board, which were transported from China to the Dutch port of Rotterdam.

According to the plan of the Dutch specialists from SMIT Salvage, you first need to pump out water from the vessel to make it lighter, then remove the sand from under it with the help of dredging vessels and equipment, after which powerful tugs can be mobilized to pull the vessel out into the water.

On the eve of the US President Joe Biden said that the American authorities are studying ways to help remove Ever Given from the aground and unblock the movement. According to him, the United States has the capabilities and equipment that most countries do not have.

Recall that the container ship turned across the Suez Canal and ran aground on the morning of March 23. Its length is 400 m, width is 59 m. On the day when the huge ship ran aground, blocking the channel, the wind speed was up to 40 knots and was accompanied by dust storms. The authorities first named the weather conditions as the cause of the emergency. However, according to Rabia, this was not what triggered the incident, and major accidents tend to have “complex” causes. He stressed that the huge size of the container ship makes it difficult to control, since its length (400 meters) exceeds the width of the canal (up to 350 meters).