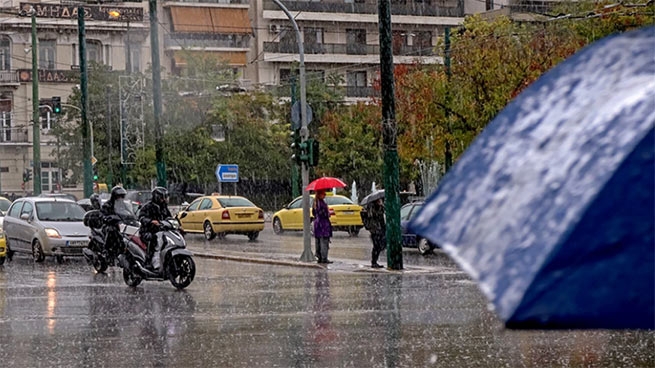 The Greek National Meteorological Service on Monday issued an emergency bulletin warning of worsening weather with heavy rains and storms.

A bad weather front coming from the west is forecast to hit Greece in the late afternoon of Tuesday 22 November 2022 and gradually move to the east and south of the country, including the islands. The barometric low brings heavy rains and storms, as well as hail and hurricane-force winds up to 8 on the Beaufort scale.

No sooner had the people of Greece moved away from the cyclone Phobos (Fear), which last Sunday brought with it short but heavy rains and strong winds, which led to damage in Mesollog and the port of fishing boats among other areas, so after it comes a new cyclone .

Monday 21 November temperature will remain above seasonal levels, but there will be a slight decline caused by Tuesday’s barometric low.

The new cyclone, which is currently located off the Mediterranean coast of France and is moving east at high speed, will touch Greece on the edge. However, according to weather forecasts, it will bring storm winds up to 40 m/s (8 points on the Beaufort scale), showers and thunderstorms.

On Wednesday (November 23), the atmospheric minimum will move further east, affecting the rest of the country. Phenomena will gradually weaken by Wednesday evening.

Due to the rather high speed of the cyclone, meteorologists do not yet know exactly where it will move. An approximate forecast can be seen on the animated map above. Nevertheless, it is assumed that the mountains of the Balkans, incl. Greece will become a kind of frontier where the cyclone will stop and dissipate. And this means that all the energy and moisture accumulated by him in the Eastern Atlantic and the Western Mediterranean will pour out into the territories of Italy, Greece, Albania, North Macedonia.

It is worth noting that the temperature in Athens will continue to be above the seasonal average and in the coming days will be between 19°C and 24°C during the day and between 12°C and 16°C at night.