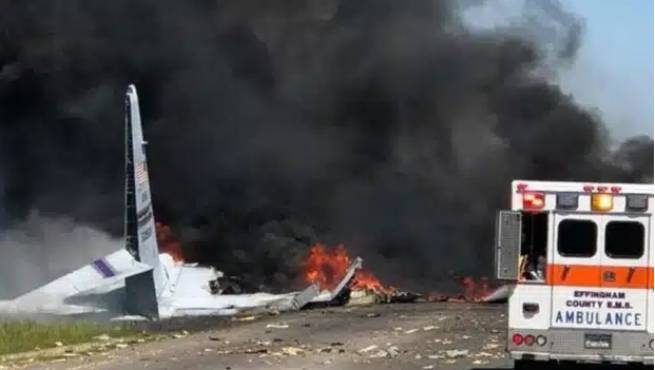 A Boeing B-17 Flying Fortress heavy bomber and a rare Bell P-63 Kingcobra fighter jet collided at around 1:20 p.m. at the Wings Over Dallas airshow in Dallas on Saturday.

According to CNN, citing the Federal Aviation Administration and the Dallas Fire and Rescue Service, both crew died. 40 fire and rescue units are working at the crash site. The number of victims, according to Dallas Mayor Eric Johnson, has not yet been established. The Allied Pilots Association, the union representing American Airlines pilots, reported two retired pilots and former union members among those killed in the collision. APA’s Twitter post says Terry Barker and Len Root were among the crew members of the B-17 Flying Fortress during the Wings Over Dallas airshow.

Both aircraft are considered rare. The first American all-metal heavy four-engine heavy bomber Boeing B-17 Flying Fortress, from World War II, was designed in 1934. It was part of the Texas Raiders Air Force Commemorative Collection and was kept in Conroe, Texas, near Houston. It was one of approximately 45 fully preserved examples of the model, only nine of which are airworthy.

The Bell P-63 single-engine fighter is even rarer, with only 14 aircraft of this model surviving, only four of which are airworthy in the United States, including one owned by the Memorial Air Force.

Commemorative Air Force President and CEO Hank Coates told reporters at a press conference that the B-17 “usually has a crew of four to five people, and the P-63 is a single-pilot fighter”:

“I cannot release the number of people or their names officially until I am authorized to do so by the NTSB. The maneuvers they [самолеты] performed, were not dynamic at all. It was what we call “bombers on parade”. It’s not about the planes. I can tell you that these are great planes, they are safe. They are in very good condition. The pilots are very well trained. So it’s hard for me to talk about it because I know all these people, it’s family and they’re good friends.”

On Saturday evening, the NTSB said it was launching a task force to investigate the collision. The team is expected to arrive on Sunday, the announcement said. No spectators or other people on the ground were reported injured, although the debris field from the collision includes the Dallas Executive Airport, Highway 67, and a nearby shopping mall. The Wings Over Dallas event, according to the organizer’s website, has been cancelled.

The people flying the planes at the CAF airshow are volunteers and go through a rigorous training process, Coates said. Many of them are airline pilots, retired airline pilots, or retired military pilots.