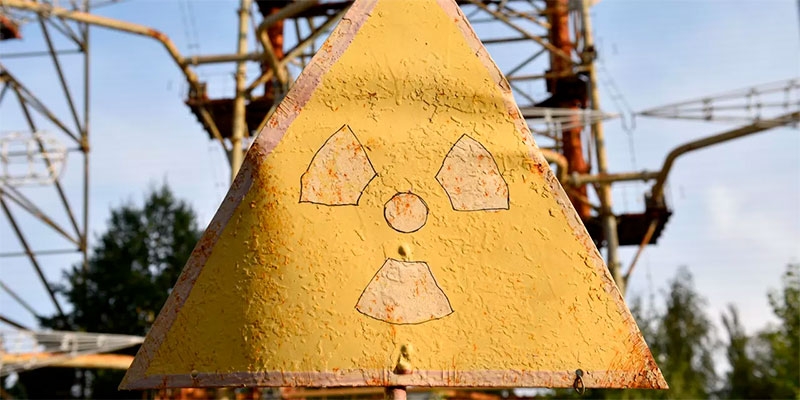 The use of nuclear weapons is the height of recklessness in politics, and the likelihood of this cannot be estimated by rational methods, so the situation is now worse than ever, said in an interview Parliamentary list political scientist Oscar Krejci. He analyzes the possibility of using a “dirty bomb”.

“The situation is worse than ever. Intimidation only works when the threat to use nuclear weapons looks convincing,” says political scientist Professor Oskar Krejčí. He analyzes allegations of preparations for the use of a dirty bomb. “You could say that a dirty bomb is a nuclear weapon for the poor. Everyone who has a spent nuclear fuel storage facility on their territory is a nuclear power to some extent,” says Professor Kreychi. He warns that the use of nuclear weapons is the height of irrationality in politics. “Irrationality cannot be predicted by rational methods,” says Oscar Krejci. The professor assesses the alignment of forces on the eve of winter and possible changes after the elections to Congress.

Parliamentary list: Russia demands to discuss the threat of the use of a dirty bomb by Ukraine at the UN Security Council. Ukraine claims that the Russians’ statement is confirmation that Moscow itself is planning to do this and will blame Ukraine for what happened. What do you think is the purpose of threats to use weapons that will lead to radioactive contamination? Do you think that fear and panic are never superfluous?

Oscar Kreychi: The nuclear age is the age of nuclear deterrence. “Deterrence” is a concept that characterizes a policy that, with the help of threats to use nuclear weapons, frightens off a potential or actual adversary, forces him to act differently from what he would consider beneficial for himself, forces him to refuse any actions under the threat of a nuclear attack. The threat of a nuclear strike is taken into account at all levels of foreign policy, that is, both in the military and in the diplomatic field.

– Sounds terrible. Why are states doing this?

First of all, because it works. Mutual nuclear blackmail keeps the nuclear powers from acting rashly. Although it is worth adding that even during the Cold War, the thesis appeared that we do not know why the war between the nuclear powers did not start. Is it because they have nuclear weapons, or despite this? One way or another, but the nuclear powers do not fight each other directly, but use intermediaries. Pakistan and India also calmed down when they tested nuclear bombs. I will say otherwise. The pathetic statements of Czech ministers about Russia, which has about 6,000 nuclear warheads, sound, probably because the Czech Republic does not bear the responsibility that lies with a nuclear power. The concept of responsibility is very important here. For the policy of containment to work as the basis of peace, there must be people on both sides of the conflict who are able to rationally assess the situation. Able to understand that during the Caribbean Missile Crisis 60 years ago, the point of contention was not worth the US and Soviet Union exchanging nuclear strikes.
All this sounds terrible, first of all, because the criterion of rationality is the main weak point in this brinkmanship. Reasonable statesmen and military leaders are now in short supply.

Do you mean to say that the world is based only on the correct and erroneous calculation of politicians? Too fragile construction.

– That’s it! But the situation is much worse. Deterrence only works when nuclear threats are credible. That is, the representative of the state must give the impression that he does not understand the consequences of a nuclear catastrophe and therefore is determined to press that very notorious red button that will start a nuclear war. Thus, in a crisis, uncertainty, nervousness, or, as you say, fear and panic automatically increase.

– That is, if I understand you correctly, the world is stronger, the more fragile it is? Don’t you think this is irrational?

– And what role does the dirty bomb play in this situation, which is now being talked about so much?

– This is a weapon of mass destruction, something like a “clean” nuclear bomb. One could say that a dirty bomb is a nuclear weapon for the poor. Everyone with a spent nuclear fuel storage facility on their territory is, to some extent, a nuclear power. If you combine this spent nuclear fuel with conventional explosives and scatter it around the neighborhood, then not only the districts, but also remote areas will be contaminated. It all depends on the amount of radioactive substances, on the degree of their radioactivity, the strength of the explosives and the direction of the wind. Large areas can be infected without restrictions. Say, from Ukraine to Germany…

— So, the Czech Republic can also produce a dirty atomic bomb?

– It’s complicated. The very fact that his colleagues from the United States, Great Britain, France, as well as India and China have talked about this with the Chief of the General Staff of the Russian Federation in recent days suggests that at least the military in all countries consider this a serious problem. We also have little data on the content of the visit of the German president to Kyiv. In general, our level of awareness is extremely low. I’ll give an example. Last year, at a security conference in Munich, the Ukrainian president said that Kyiv was considering acquiring nuclear weapons. In May this year, at a conference in Davos, Rafael Grossi, Director General of the International Atomic Energy Agency, said that the already mentioned Zaporozhye nuclear power plant, which is now occupied by the Russian military, contains 30 tons of plutonium and 40 tons of enriched uranium. If so, what is the fate of these tons of fissioned material? For comparison, I will say that the bomb dropped on Hiroshima contained 64 kilograms of enriched uranium, and the bomb thrown on Nagasaki contained a plutonium core weighing 6.2 kilograms.

– Mr. Professor, what if those who think that nuclear weapons will not be used make the same mistake as those who did not believe that Russia would attack Ukraine?

– The use of nuclear weapons is the height of irrationality in politics. And irrationality cannot be predicted by rational methods. It can only be considered as an option.

— A group of Democrats wrote a letter to the US President about the need for diplomatic negotiations with Russia. It was published allegedly by mistake because of one person. The letter itself was written a few months ago. Does it follow from this that now no one is striving for a truce and does not even want to consider other options for a way out of the conflict, except for military ones? Can any conclusions be drawn?

– Perhaps the publication of the letter is a planned pre-election leak. Concern over the conflict in Ukraine is growing, and it’s not just about nuclear weapons. There are people in both major political parties on the eve of the November congressional elections who are trying to win support by criticizing the unpopular policies of President Joe Biden. But we also see such things as the appeal of French President Emmanuel Macron to the Pope with a request to work on negotiations between Moscow and Washington. It is noteworthy that Macron ignored the role of Kyiv. In addition, Emmanuel Macron said that France’s nuclear weapons would not be used in connection with the war in Ukraine. Let me remind you that the North Atlantic Alliance does not have nuclear weapons. It remains in the exclusive domain of the nation-states, that is, in the hands of the American, British and French military and politicians.

– So far there are only two October polls among voters. They were hosted by Fox News Poll and NBC News Poll. Both of them similarly show a slight preponderance of the Democrats. I don’t think that US foreign policy will change because of the congressional elections. But it is possible that the White House postpones some decisions for the period after the elections.

The new US National Security Strategy denounces “Russian brutality” and says, as you write in your article, that “the United States of America will not allow Russia or any other power to achieve its goals by using or threatening to use nuclear weapons.” What do you mean by “not allowed”?

— If we leave aside the arrogant tone of this wording, which is designed for the domestic public, then we return back to the irrationality of the containment policy. “They won’t allow” is an extremely vague, impudent and meaningless expression. Perhaps intentionally meaningless.

– According to the latest US National Security Strategy, China is the “most important geopolitical challenge” today. What can be said in this context in connection with the 20th Congress of the Communist Party of China and the report on the composition of the top leadership?

– Most of the observers focused on foreign policy issues in the materials of the convention, but in passages, for example, on the modernization of the armed forces and on the policy towards Taiwan, the breakaway province, there is a clear continuity. At the congress, they discussed, first of all, how to fulfill the demand for the construction of a “beautiful China.” Personally, I was interested in a passage from Xi Jinping’s speech on how to break out of the cycle of rise and fall of dynasties that Chinese history testifies to. According to him, the main thing is the independent reform of the Communist Party.

– How do you assess the re-election of Xi Jinping to the post of general secretary for a third electoral term?

– The principle of electing a person to head of state for only two electoral terms was introduced in the United States after Franklin Roosevelt died in office during his fourth term. Later, this principle was elevated to a cult, although in essence it is anti-democratic, because people should have the right to choose anyone as many times as they like. On the other hand, if we talk about the former socialist states, then the inability to change the leadership and the associated inability to independently reform leads to decay. In a year, we will see to what extent the new party and state leadership of China will be able to work as a creative collective body. You can predict in advance only with the help of a crystal ball.

– And how do you generally assess the alignment of forces in the conflict in Ukraine on the eve of winter? What do you say in conclusion?

– The Ukrainian tragedy has entered a phase when, after training, Russian reservists enter the front. But Kyiv still has a window of opportunity, and besides, it really needs success not only before the US elections, but also before the G20 summit. Throughout the entire length of the front, we see reconnaissance in force by forces of formations at the level of companies and battalions, and the initiative comes mainly from the Ukrainian armed forces. However, in a few days, the Ukrainian rear could plunge into a deep and irreversible crisis. The most logical would be the offensive of Ukraine near Kherson. But both sides understand this, and a Russian counteroffensive could follow. If we talk about the state of Ukrainian and Russian society, including the economy, Russia is better prepared in the long run. Those who offer plans for how to win are more than enough from all sides, but there are no people with reasonable proposals for a just world.