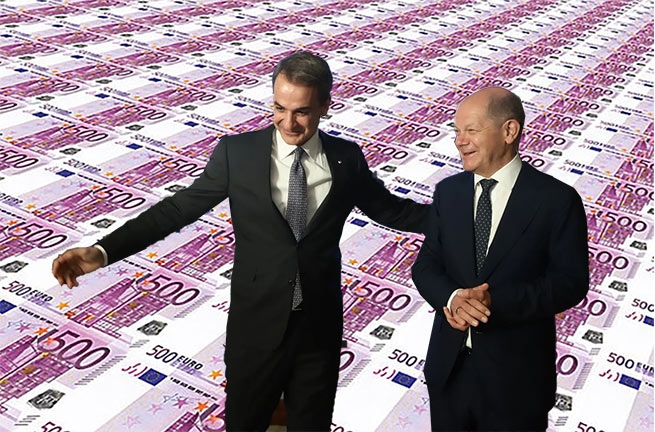 Kyriakos Mitsotakis is ready to offer Olaf Scholz four billion for participation in the parade on October 28, where German Marder armored vehicles will also be presented, the popular Greek publication ieidiseis.gr characterizes the negotiations between Greece on the purchase of military equipment.

Over the past twenty-four hours, orders for the German military-industrial complex have been showered with golden rain, writes Dimos Verikios, author ieidiseis.gr. Two billion for the modernization of tanks turned into 3.5 billion in just a few days. At the same time, the Prime Minister asked for another half a billion for a modernization program for four MEKO 200 HN frigates, which will be built at the Scaramanga shipyards under the strict supervision and control of the German shipyards ThyssenKrupp Marine Systems, in cooperation with the Dutch Thales Netherlands. The cost of this project is estimated at more than 600 million euros.

Most egregious, however, is the Leopard tank modernization program, which the Joint Chiefs of Staff characterize as “unnecessary” and “sky-high” because it concerns not the operational priorities of the Greek military, but a hazy vision of European security and, above all, new business schemes. European defense industry, which excludes the existing Greek defense industry, which is under the responsibility of the Greek government!

The day before yesterday, iEidiseis reported that the Greek government is preparing to allocate 2 billion for the modernization of Leopard tanks without any request from the General Staff! This “sky-high” weapons project should increase the turnover of KNDS, which was created as a result of the merger of Krauss-Maffei Wegmann (Germany) and Nexter (France).

This program for the modernization of Greek tanks is, in fact, a pure “gift” from Kyriakos Mitsotakis to Olaf Scholz, who, as announced, arrived in Greece on October 27 “accompanied” by the first ten used Marder armored vehicles that Berlin is sending to replace the Soviet BMP-1 which Greece has already begun to send to Ukraine.

Only the “gift” to Scholz will cost the Greek budget not 2, but 3.5 billion euros, since it will include new armored personnel carriers. According to leaks from the Prime Minister’s Office, Kyriakos Mitsotakis ordered the launch of two projects involving the modernization of 183 Leopard 2 tanks, 190 Leopard 1 A5 tanks and the purchase of 205 new Lynx KF-41 armored fighting vehicles (TOMA) worth 3.5 billion . euro. Purchases of which the relevant headquarters are informed by government leaks and which have nothing to do with armament priorities for the competent institutions!

According to a leak from the prime minister’s residence: Kyriakos Mitsotakis believes this is a first-class opportunity to ensure strategic cooperation between Athens and Berlin, “and as “cheese” in a mousetrap, they present a demand for the creation of a joint production of armored vehicles and tanks in Northern Greece, bypassing existing production units (EVO Mandra Attica, ELVO Thessaloniki, METKA Volos).

According to representatives of Megaro Maximo, German investments in Northern Greece will create many new jobs and a wide range of industrial cooperation and returns for the Greek economy! However, the premier’s administration avoided clarifying two important points:

one: The head of this particular German investment is a former close associate advisor Akis Tsohatsopoulos (the former Minister of Defense of Greece, convicted of corruption), who they do not want to see even close to the General Directorate for Procurement of the Ministry of Defense and the General Staff of Greece.

2: The members of the competent committees of the Greek General Staff, which were set up with the primary mission of cutting the Gordian knot of the 2003 main contract, have expressed in writing their no confidence in the alleged manager of the promised German investment in Northern Greece.

Unjustifiably generous, given the energy crisis, inflation and the general economic situation of the country, with a national debt, the amount of which, for some reason, has been hidden for almost a year. However, when did these problems worry the New Democrats?