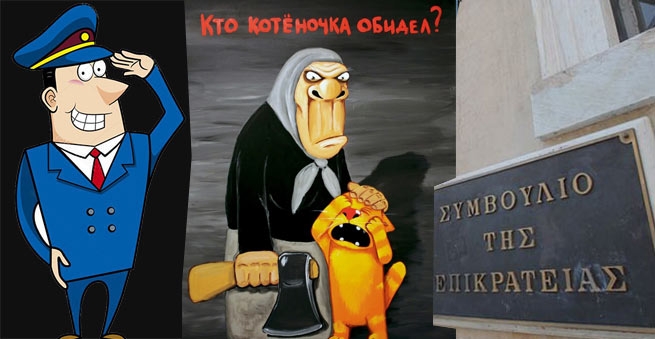 A Greek Supreme Court prosecutor intervened after a trial court in Chalkis acquitted a 30-year-old man for kicking a cat last May.

In Greece, where the average waiting time for a court decision is 7.5 years, and the courts sometimes last for decades, as a result of which real criminals, incl. murderers and rapists go free due to the statute of limitations, the Prosecutor of the Supreme Court of Greece decided personally intervene in a resonant story. The man was accused of kicking a cat while sitting at a table in a tavern, after which the animal fell from a 20 cm high deck onto the beach.

According to the case file and a video filmed and posted online by one of the defendant’s friends, the young man lured the cat with a piece of fish, and then kicked it with his foot, throwing the animal off the deck onto the seashore.

At first, it was not clear what happened after the cat was kicked, as the video gives the impression that he fell into the sea. Members of the local society for the protection of animals immediately rushed to investigate the incident and reported to the site zoosos.gr, who deals with animal issues, that the owner of the tavern says that the two cats belong to him. He assured them that they were all right and that he “help find the culprit”.

As disturbance wave propagation The “perpetrator”, a young man, uploaded several videos to social media in which he cursed his critics with nasty words, stating, among other things, that he was a “victim of bullying”. He claimed that the company drank before “playing tricks with the cat.” He claimed that the cat fell “20 cm down on the pebbles”. He went on to claim that he loves animals and takes care of dozens of stray cats and dogs.

Fool, he has not yet realized how hard he hit …

The Greek Society of Animal Lovers Remains Indifferent to Excuses “cat slayer” and continued to demand his punishment. Defenders of the seals were extremely excited because of what happened and demanded immediate punishment for the culprit, up to and including death…

Apparently, the animal advocates had very high patrons, or, most likely, relatives (wives and daughters) of high-ranking officials were involved. And a day later, early in the morning, Minister for the Protection of Citizens Takis Theodorikakos, as cnn reports, personally demanded from the leadership of the Greek police that all the main characters of the infamous video be discovered, arrested and brought to justice as soon as possible.

Late that evening the minister posted on twitterwhat the main criminal of Greece is arrested. “Some time ago, Greek police arrested a man who kicked and threw out a cat. Violence against animals is unacceptable. The government has passed a strict law on the protection of animals from cruelty, which is now in force, but in any case, this is a matter of humanity and culture. I am deeply saddened by the actions of those who abuse animals and those who tolerate it. I heartily congratulate everyone who raised this issue. The decision now belongs to Greek justice“, the minister wrote.

Justice did not appreciate the mood of animal rights activists

The court, apparently, did not understand how serious this crime was … On October 19, 2022, the criminal court of Chalkis, composed of three judges (murderers and rapists are usually tried in this composition), acquitted the perpetrator of cruelty to the cat. According to the judges, no crime occurred, no one was hurt… The case was closed for lack of corpus delicti…

Man’s acquittal incredible disturbance by journalist Stamatina Stamataku, who first published the story and video in May last year by posting them on Twitter. The animal advocate has done her best to make a scandal, obviously having high patrons. A couple of days later, the prosecutor of the Supreme Court of Greece (Supreme Administrative Council), Dogiakos himself, requested the decision of the Chalkis court in order to study whether there had been a misinterpretation of the law on the protection of animals.

It should be recalled that torturing an animal is a criminal offense: entails a fine of up to 50,000 euros and a prison sentence of up to 10 years (more than for a similar crime against a human!!!). And although the death penalty has not been applied in Greece for more than 40 years, such “protectors” of animals can hire a killer…

Do you think this madness is only in Greece?

In February 2022, the defender of the English football club West Ham United, Kurt Zouma, was fined by his club for the maximum possible sum of 250 thousand pounds in such cases and deprived of two of his cats.

It all started with a home video that appeared on social networks, with the light hand of his brother, in which Zuma kicks his Bengal cat, then chases him and gives him a slap in the face while the animal is held by a child. Judging by the off-screen laughter, what was happening seemed funny to those present. British media report that this is how the football player reacted to the vase broken by the cat.

Footage of animal abuse caused a general angry reaction. About 200 thousand people signed an online petition demanding that the football player be held accountable in accordance with the law (for animal abuse in Britain there are serious fines and imprisonment for up to 5 years).