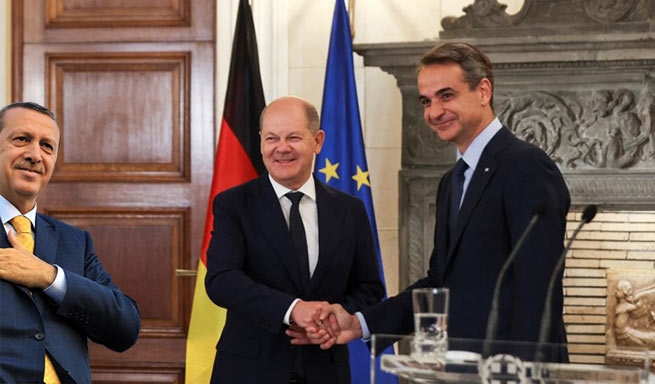 Greek Prime Minister Kyriakos Mitsotakis officially announced the partial disarmament of the islands, acknowledging during a joint statement with German Chancellor Olaf Scholz that the Soviet-made BMP-1s that were withdrawn from the islands and handed over to Ukraine, will not be replaced.

In particular, Mitsotakis said that the German “Marders” that Greece receives in exchange for the BMP-1 will be transferred to Evros, because what the Greek Armed Forces decided so! Actually Greece decided on the partial demilitarization of the islands, as demanded by Turkeysince sending a small number of M1117 armored vehicles to the islands instead of the Soviet BMP-1 cannot be considered a full-fledged replacement, due to the different classes of these weapons.

It all started with a question to Olaf Scholz: “Would you mind if German armored vehicles were deployed on the border with Turkey?” Olaf Scholz replied as follows: “We gave these combat vehicles and we never ask what Greece is doing with them. Greece is a reliable partner in NATO and I will not be responsible for this decision. There was no case that the member countries of the Alliance challenged each other’s sovereignty.

The German chancellor thus wanted to convince Germany that Germany had nothing to do with where the Marder ended up, which is not the case, since the Germans accepted the Turkish position that the Greek islands should be “demilitarized”.

Mitsotakis’ response was as follows: “I stand by Mr. Scholz’s position. I think that Germany has taken a very clear position on this issue. I think that Germany has made it clear that its position is absolutely clear on this issue. I have briefed the European Council on how we perceive these challenges, and how a de-escalation can take place. As for the German armor, I can answer that it will be deployed on Evros, because that is where the Greek Armed Forces (ΕΔ) finds it most useful. “

Thus, Greece made concessions to Turkey, since the Turks, in fact, “prohibit” the movement of weapons systems (which happened in the case of the M1117, which tried to transfer to the islands, is well known), but they will be sent to units of the 4th Army Corps in Evros.

In total, the following were withdrawn from the islands and, for the most part, sent to Ukraine: