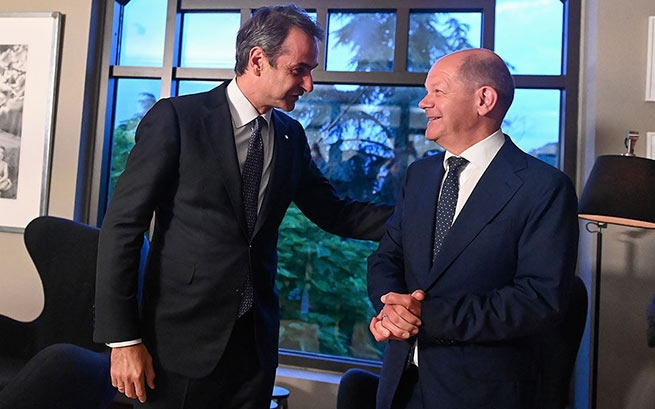 Prime Minister Kyriakos Mitsotakis and German Chancellor Olaf Scholz, who arrived in Athens on Wednesday evening, will visit the Acropolis on Thursday morning.

They are expected to return to the Maximos mansion by 11 am for a meeting. After it, the leaders of the two countries will give a joint press conference, as well as hold a question and answer session with the journalists present. Later, an expanded business lunch will be held with the participation of members of both delegations.

Armament, Greek-Turkish tensions and the energy issue will be the focus of the German Chancellor’s visit. Tank swap deal especially important for Berlin – Greece sent 40 Soviet BMP-1s to Ukraine in exchange for 40 German Marder BMPs. The German government has also concluded similar agreements (Ringtausch) with the Czech Republic and Poland.

In a changing world, Athens expects Berlin to show leadership in a direction that will comprehensively protect the fundamental interests of Europe. The insistence on fiscal discipline and the abandonment of ambitious pan-European plans – with the notable exception of issuing common debt during the pandemic – reflect respectable economic theory. However, this theory may not meet the multifaceted challenges that the European Union currently faces. It’s not just about the economy. In this context, Greece looks suspiciously at the evolution of German-Turkish ties, including at the level of arms exports.

Chancellor Scholz comes to Greece with a typical agenda to deepen economic ties. German exports to Greece rose by 16.3%, to 5.2 billion euros, in the first eight months of 2022 compared to the same period last, according to the latest German statistics.

Germany’s imports from Greece increased by 7.5% and amounted to about 2 billion euros. Cooperation in the field of green energy is also flourishing, as is the case with German foreign direct investment in Greece. Bank of Greece data shows that Germany was one of the top three investors in the decade from 2011 to 2021.

Last but not least, Chancellor Scholz’s visit to Greece could give a new creative dimension to bilateral consultations. While Germany is considering signing an agreement with COSCO Shipping for a terminal at the port of Hamburg, Greece can offer its own experience with a Chinese company that will control the port of Piraeus for decades to come. Both Germany and the European Union are trying to adjust their policies towards China, and the Greek experience is a useful source of knowledge.