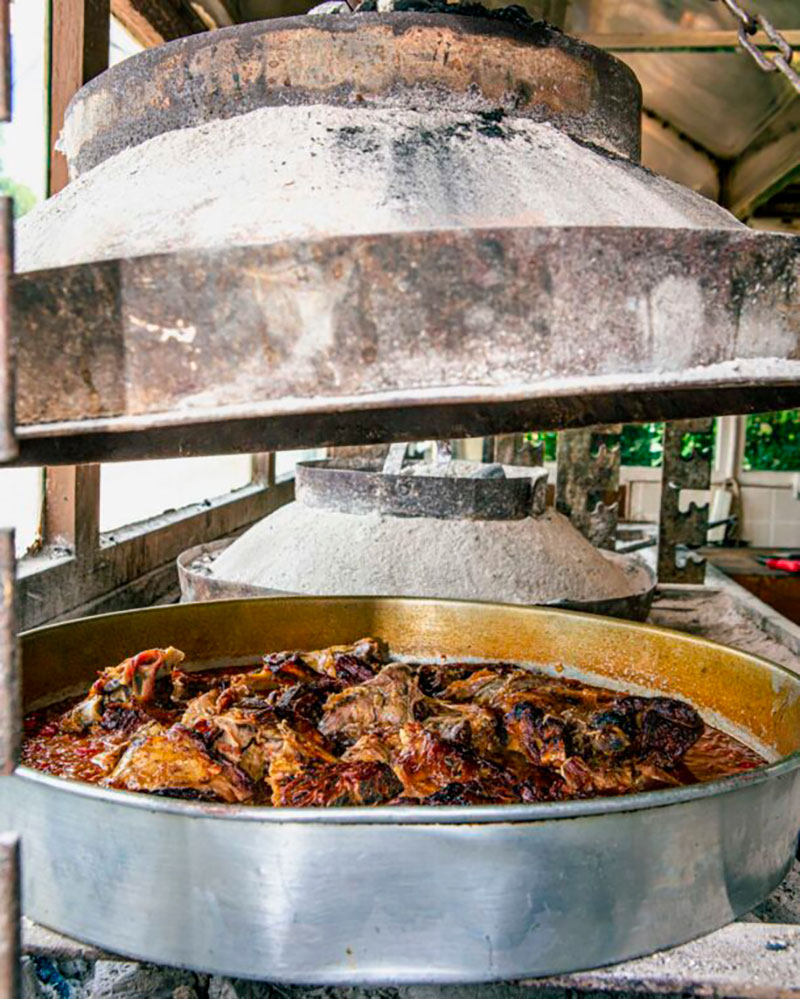 Not far from Keratea, Kostas Ioannou installed a gastro next to the tables of his Stafilomeli (honey grape) tavern. While he’s frying, he also looks up at Mount Paneio across from his establishment.

On a thick grate, one of two, lamb is stewed with potatoes and fresh tomatoes. The smell when they lift the lid to check if the dish is ready is simply mesmerizing. I don’t often see stuffed tomatoes, but here the balance of taste is wonderful, so that the thick sauce in which lamb and potatoes are bathed turns reddish, I can not call the food a stew. 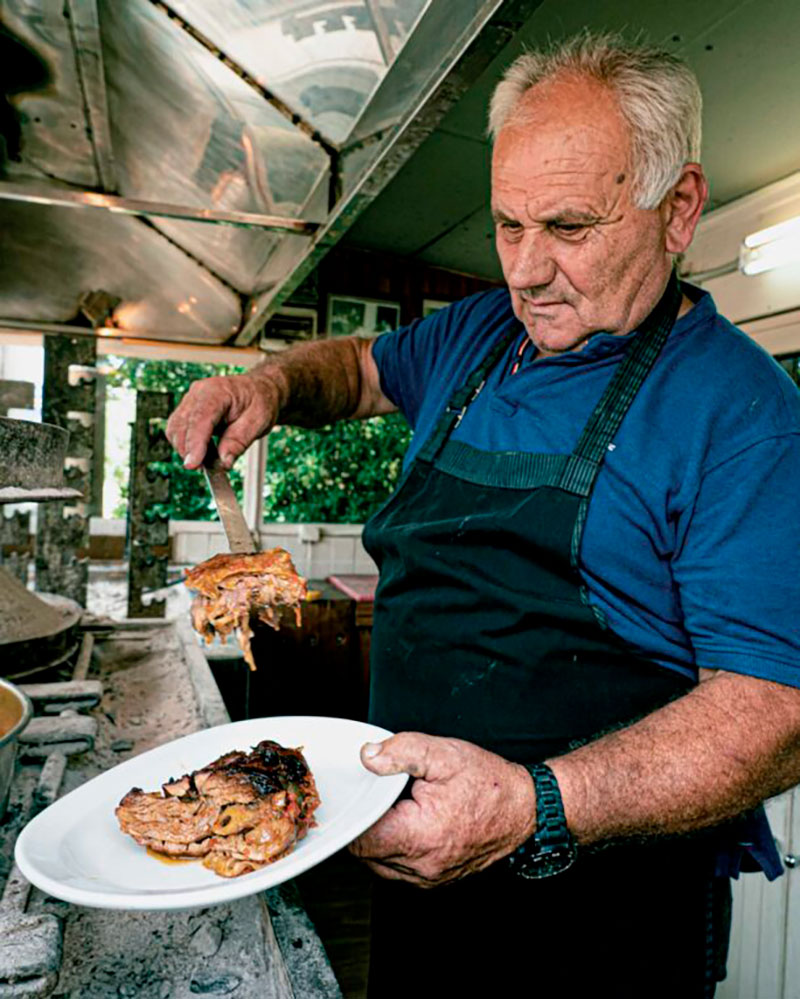 An amazingly delicious dish, thanks to the skill and art of the roaster Kostas Ioannou, in the Stafilomeli tavern

“You were supposed to be here when we made the omelet,” Kostas tells Ioannou. “Not so long ago, a fox went into a neighbor’s yard and killed his geese. There are many wounded. But he has a lot of eggs left – forty-seven! Goose eggs, as you know, are almost twice as large as chicken ones. And tastier. He brought them here, we laid them in the gastro with our own sausage, and it turned out to be an omelette … The whole store ate.” He shows me a photo on his phone, but in vain! Imagine an omelette almost half a meter in diameter, plump, pink, its shiny golden crust bubbling when it comes out of the oven! 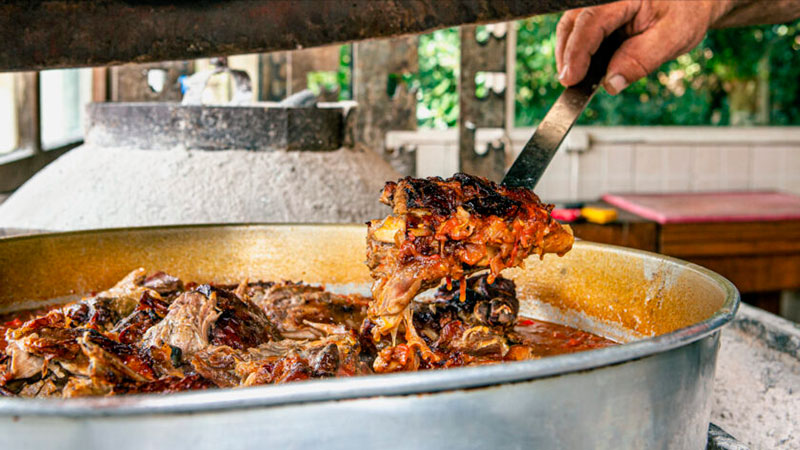 Lamb with tomatoes is not quite stewed, but lightly fried, and that’s the whole difference. However, it melts as soon as you touch it with a fork.

In other words, Kostas explained to John that everything is being done gastro, this is a frying pan that is covered with a cone-shaped lid. And lamb, and goat, and pork, and spaghetti rooster, and fattro, and duck, and stuffed duck, and tortillas, and an omelette with forest mushrooms, which he himself collects on the slopes in Pani, and pies prepared by his relatives with golden hands, and the game that his friends bring, everything! Each in his own time, his own way, his own fire. This lamb, tender as foam, with the smoky goodness of gastro-blanched tomatoes, was a poem. 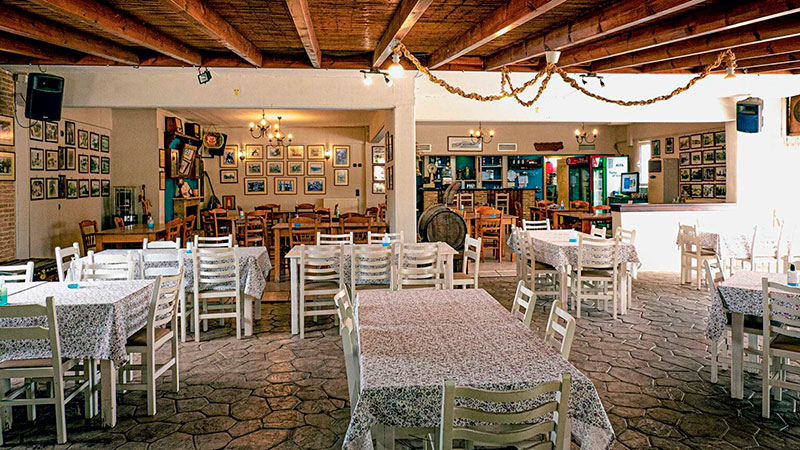 Kostas Ioannou, a well-known baker in the region, does not hide his passion for gastronomy and emphasizes that Sarakat cuisine is unthinkable without this dish. After all, for these nomadic farmers, it was the only cooking utensil they could take with them on their travels, the only one they could use in their gastros, and perfect for their vlachopitas and milk pies. A mobile stove that wandering peasants always carried with them on their journeys between the mountains. It’s in the mountains gastro also fed robbers. 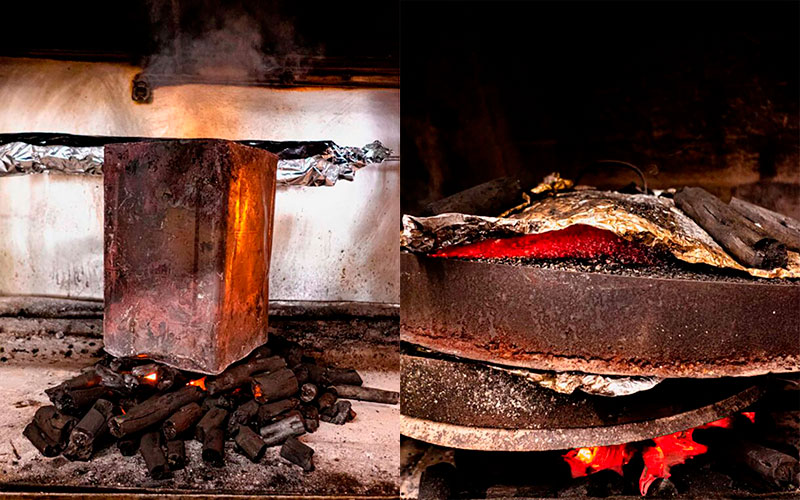 fire and glory
Thus, cooking is a skillful and difficult task in gastro. Huge, complex and demanding utensils. The Master of Gastronomy is a great master, handling this vessel with virtuosity and ease, but above all, he is always an excellent cook. 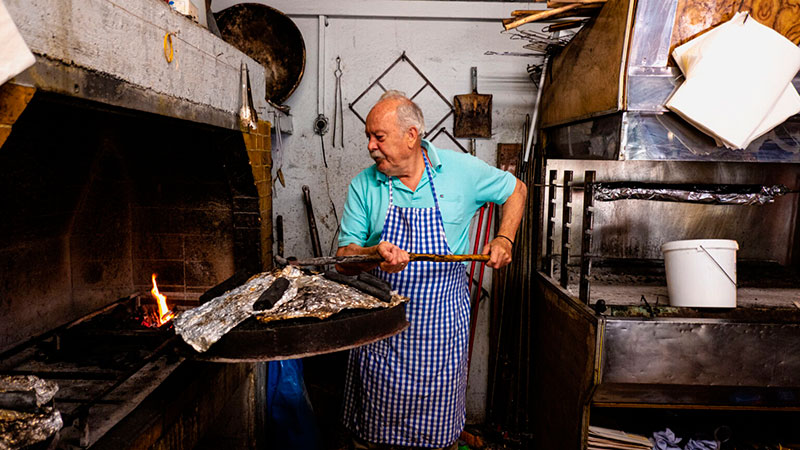 Petros Gulas, the master of the skewer, roasts honey lambs and kids on a spit in the Vlahiki Gastra tavern in Rodopoli, “Bala” as the old-timers call it. Early on Sunday morning, he prepares for the influx of customers who arrive from all over Attica. 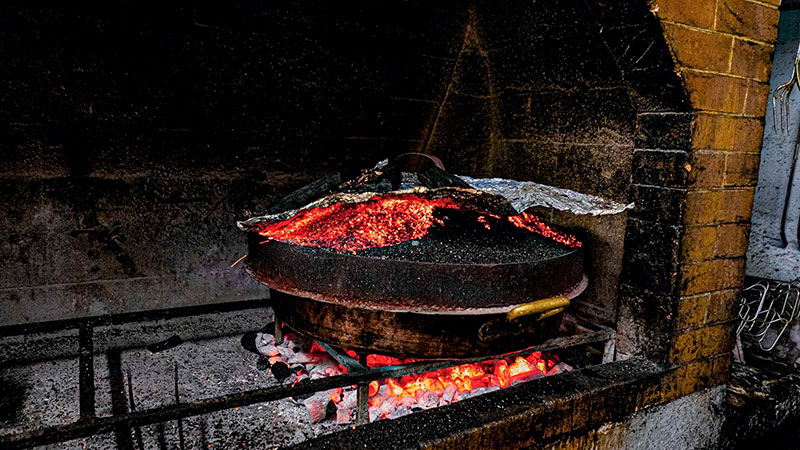 Secrets of the Sarakat gastro.
Cooking in “gastro”, as the Saratsani call this dish, is an art. In the gastro you will bake omelettes and minced meat, butter and beef, lamb, rooster and game, pies and pastries. There are no restrictions. This was known to the nomadic herdsmen of Greece and the Balkans, who used it as the main kitchen utensils in their travels.

Preparation begins at dawn: whole carcasses from Kopaida, Livadia and Arakhovo arrive at the workshop. He took the precaution of choosing each of them himself, making sure “that the meat was fat, healthy, not lean,” and slaughtered it himself in the slaughterhouse. Together with his brother-in-law Xenos, he will separate them and cook them – chicken innards and spleen on a skewer, and cut the rest of the parts as needed to go to the gastro.

At night, the potatoes are cut into large cubes, plentifully moistened with lemon and left in a large basin. Why lemon? “Because the potatoes go into the gastro from the very beginning, along with the meat, and are stewed for several hours. The lemon thickens them so that they can withstand such a long cooking time that they do not melt and turn into a cream,” he explains. They are elastic and hard, but soft, tender, like butter, retaining their shape, elastic and tender on the fork. 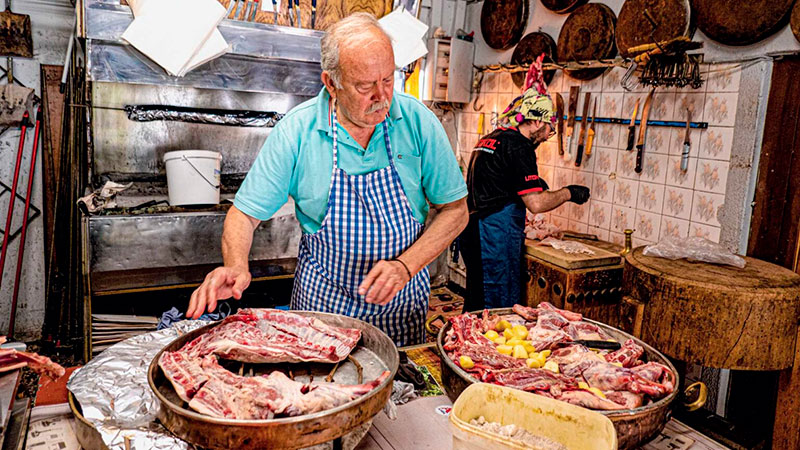 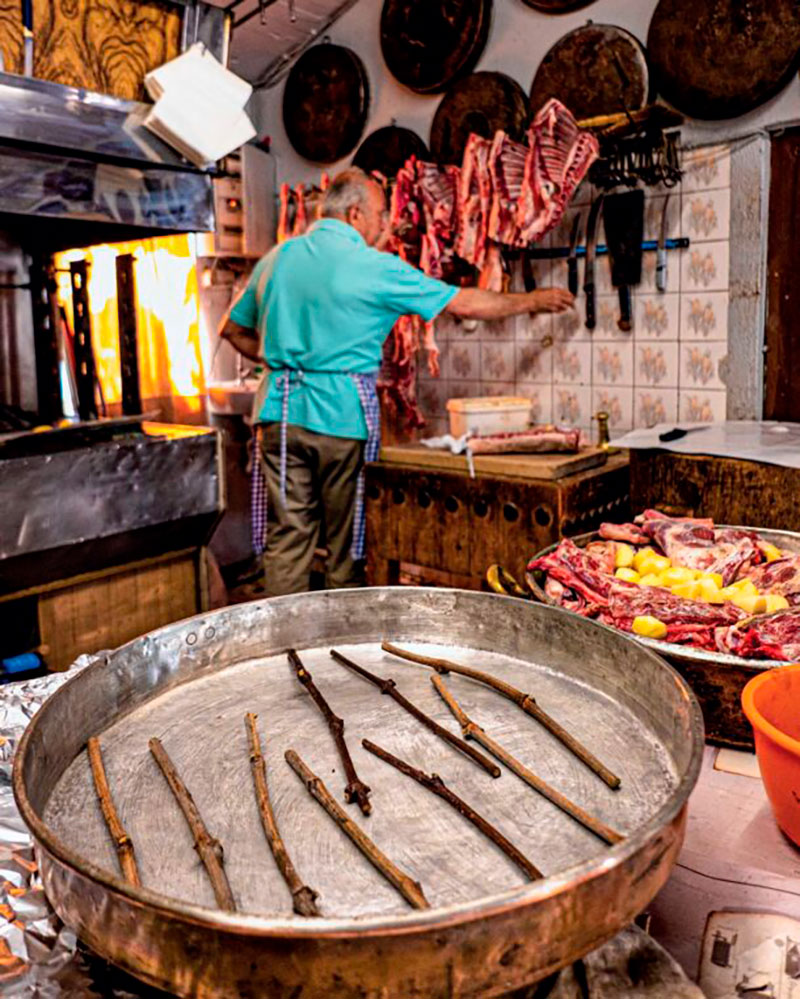 Copper pots are lined with vines. 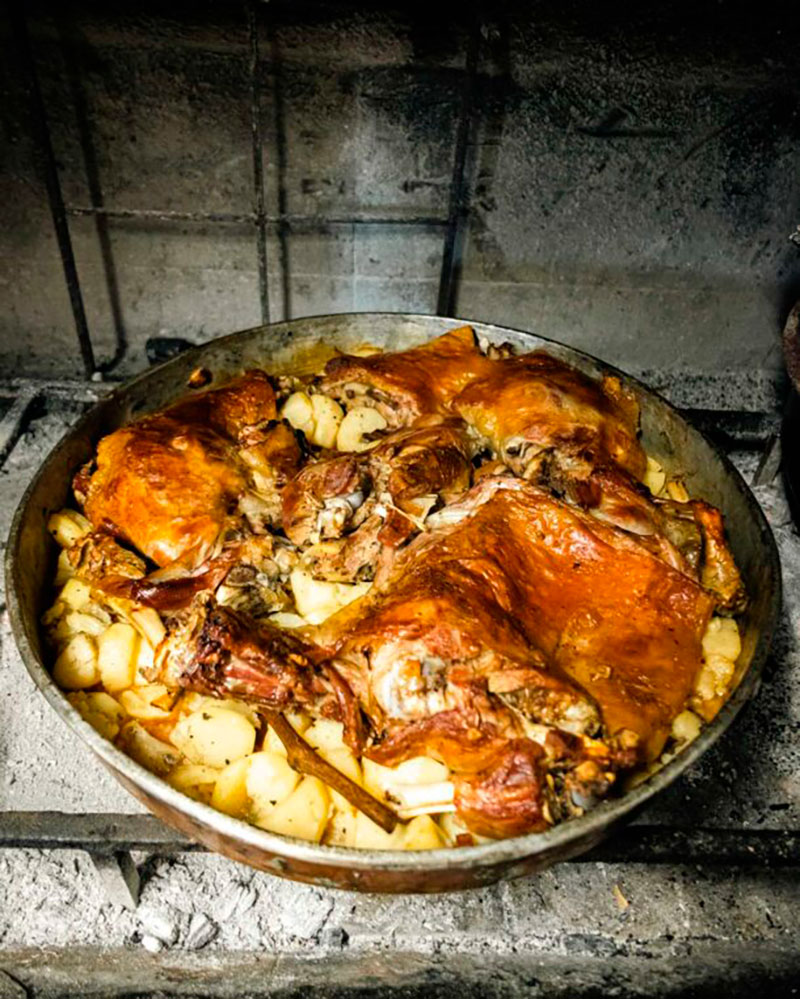 Lamb baked in the oven with potatoes is placed on top of them. Food is fabulous!

First, a few vines are placed on the bottom of the baking sheet – for flavor and so that the meat does not stick. Large pieces of lamb are laid on them, the lamb is cut into 4-5 parts. Between them is a potato. A little water, salt, pepper and oregano. That’s all you need.

Old copper pans are weightless. Today he filled two of them with mutton and potatoes, sometimes putting goat or beef in one of the pans, depending on the order. The fire in the paragon is kindled, and we are waiting for the traka to be well digested. The charcoal comes from Mount Athos, from aria, a type of oak with a harder wood than holly, so it makes an excellent charcoal that burns steadily. Until this coal is prepared, two lighters are fixed on the coals. They are supported by the gastro, i.e. the conical lid of the pot, with a cornice around it to support the olive kernel brought from Kalamata, which covers it.

When the gastro is heated, the core covering the gastro is heated and cooks the food from above. The core is covered with aluminum foil, which is fixed with a few pieces of charcoal. To prepare the dish, it will take patience until the drops are digested, and perhaps a little help from a hair dryer. When the roaster decides that the traka is ready, he raises the body with a thick wooden stick, puts the pan with food on the fire and covers it again with the body. 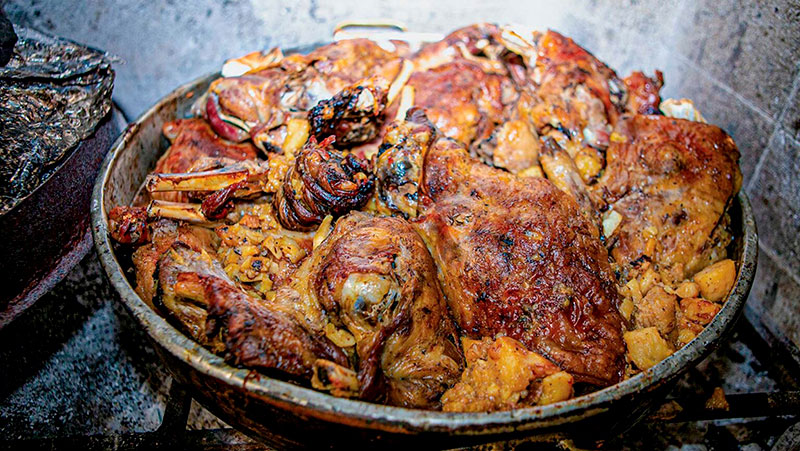 Cooking in a gastro requires endurance, knowledge and experience from the baker.

Baking will take three to four hours, and this is not just hours of waiting. It’s a constant vigilance, because the truck needs to be fed, you have to control yourself, she doesn’t want to be butchered or maybe another core needs to be put on her stomach to put in and take out when necessary, aluminum foil to increase or calm the intensity of the fire, check every quarter of an hour whether there is still water in the pan, and add a little, very little, if necessary, because “the food in the pot must be cooked, not boiling water” and take the hot wave that pours against you.

Gastro is a physical tension and a constant exercise in technique. You must be a titan. You don’t rest for a minute. It’s four hours in hellish heat. But! It is this “but” that matters: for the sake of the delicacies that are obtained from it and which bring loyal customers of all ages and from all corners of Attica, whether it be Keratea or Rhodopolis, it is worth going through all these trials, hardships and fatigue. For the food that comes out of it, and you don’t even need a knife to cut it. For meat that melts as soon as you touch it with a fork. So says Petros Voulas, so says Xenos. In the end, all such establishments have a reputation. I hear the griller listing names from all the different places that frequent his shop. “They fell in love with gastro,” he says with a laugh. 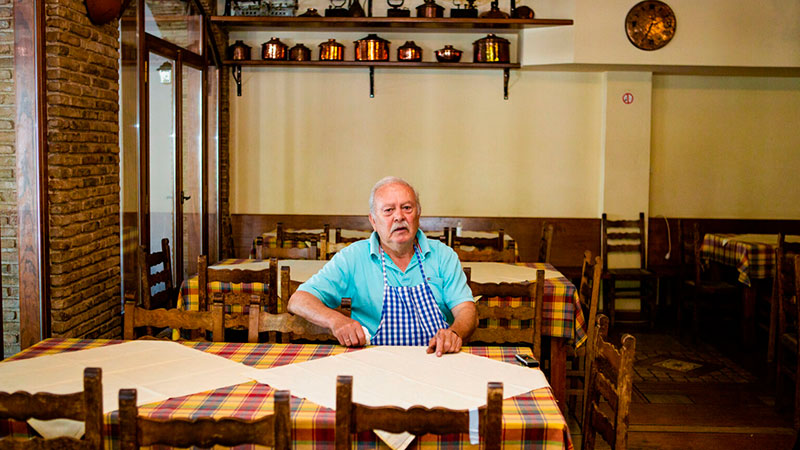 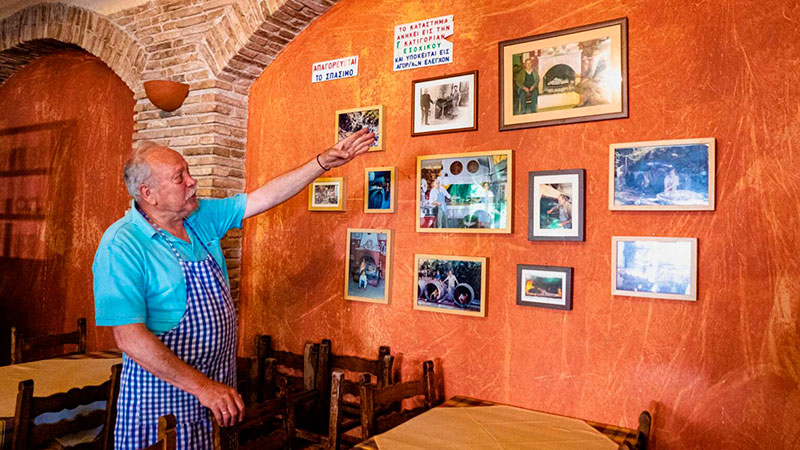 The territory of modern Rhodopolis has always been a pastoral region. This is one of the parts of Attica with a suitable climate, which the nomadic Sarakat shepherds preferred to drive their flocks down from the mountains of Epirus, Thessaly and northern Rumelia. The family of Peter Gulas comes from the village of Agrafa, Veros Sarakatsanos. At some point, his ancestors settled in Bala. The first generation of the family to establish the tavern was Barpa-Thassos Goulas, Peter’s grandfather, in the mid-1920s. “Then it was a stone building with tiles. It was a grocery store, and it had five tables,” recalls Peter. “They made feta cheese, there was halva, sausages, they sold trepsin, there were barrels of cognac and ouzo. The Athenians came and ate drinking and having fun.” Then his son Theodoros took over the business, who slightly expanded the tavern. Gastros was now well established in the restaurant, with many customers coming for the honey lambs. Petros Gulas took over the tavern in 1983 with his wife Maria and they expanded the tavern further. It has only been two years since his daughter Theodora took over the reins with her husband Xenos, and they have warmly accepted the responsibility of continuing this family tradition. 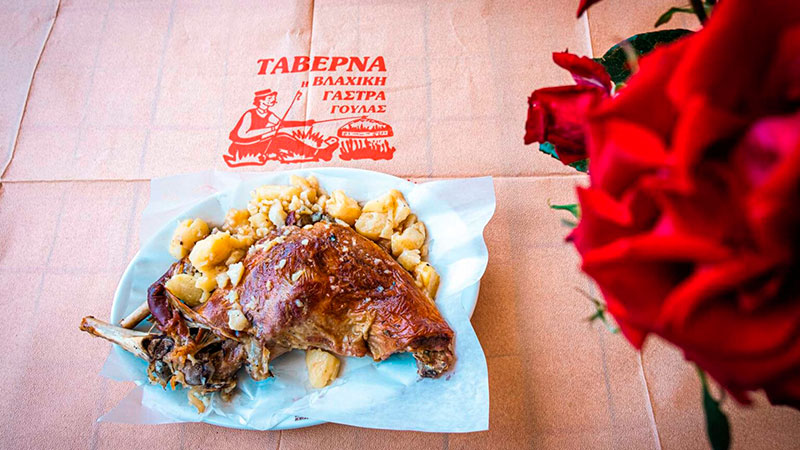 Secrets of the Saracen gastra
What you cook in gastra is a matter of art and imagination. Experienced roasters such as Kostas Ioannou and Petros Goulas are not limited to meat, but it is this that requires maximum knowledge for this tough roast. 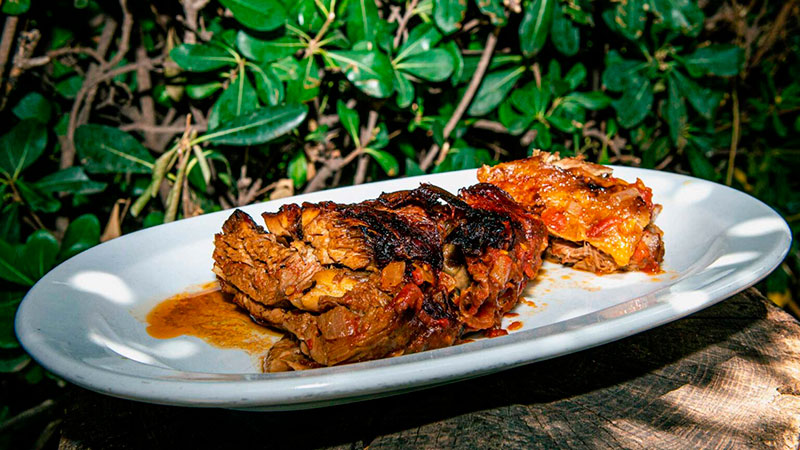 The xenos also hardened in fire, got used to it, withstood it and loves this art, although there are many problems. First, utensils and tools are starting to become scarce. Gone are the copper craftsmen who made the wrought iron pans and fire pots of Jannia, which Mr. Peter still maintains with tooth and nail. The prostitutes disappeared, the craftsmen who knew how to make durable razors disappeared.
Artisans and bakers go with them. No one knows how many more generations of gastro grilling will be around, but as long as we have such grillers around us, those few fire masters like Petros Goulas and Kostas Ioannou, the opportunities for such delights in gastro grilling are not lost!