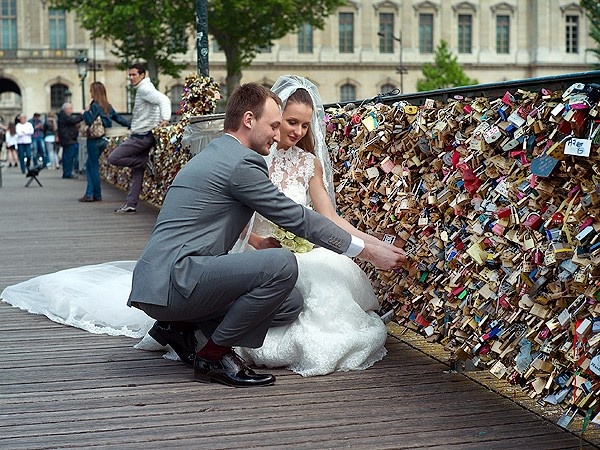 Loving residents and guests of Thessaloniki got into the habit of hanging the so-called “locks of love” on the sculpture “Umbrellas” by Zongolopoulos or on the railing of the embankment.

Love and romance, dreams and promises were “locked” by their protagonists with the hope that or even the certainty that “their feelings will last forever”. Regardless of what everyone ended up writing on the lock, they are symbols of the birth of feelings, love between two people.

Various types of metal railings have turned and are turning into a kind of “monuments of locked love.” The first of them appeared in Europe several decades ago, but their number has gradually increased, making itself felt in more and more cities.

In most cases, railings with “locked love” are found on the embankments of rivers and seas. And this is because lovers want, once they have “locked” their love, to throw the keys into the water so that they are lost, so that their love remains eternal forever.

Among the most famous cities where there are such “monuments of love” are Paris, Rome, London, Cologne, etc. A few years ago in Paris, the bridge over the Seine was in danger, and tons of… love-filled locks had to be removed to prevent it collapse.

Thessaloniki also followed the European fashion, and already the first castle appeared at the cultural site “Umbrellas” a few years ago.

In addition, dozens of locks of all kinds, shapes and colors hang on fences installed on the railings and stairs of the embankment, which is an interesting sight for passers-by, local residents and guests.