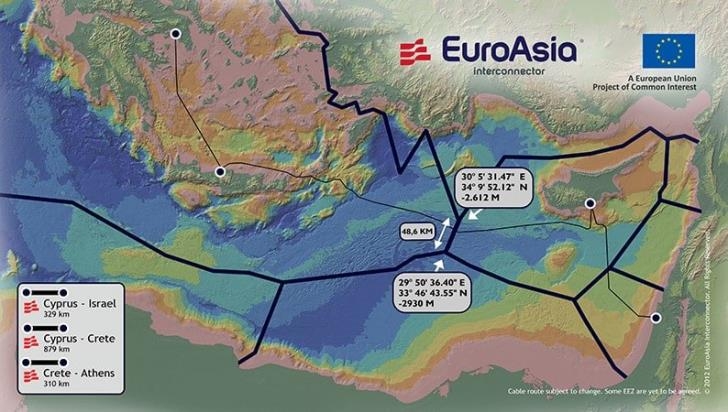 With the commissioning of the interconnection, Cyprus will no longer be the only isolated energy market in EU and be able to import cheap energy to European markets.

Another step, both symbolic and actual, will be taken next Friday (14/10) to implement a large-scale energy project.

In the presence of the President of Cyprus, the European Commissioner for Energy Kadri Simson, the Minister of Energy of Cyprus Natasha Pilidou and the Minister of Energy of Greece Kostas Skrekas presentation of projects of the Eurasian interconnector will take place, cross-border project – interconnection. At the Presidential Palace in Nicosia, they will announce the interconnection of the electrical networks of Greece and Cyprus (and at a later stage, possibly also Israel) in both directions, with a length of 1208 km.

Ground work is expected, according to Filelefthero’s post, will start shortly in the Kofinos area under German Siemens management, with a target of completion in 2027.

With commissioning interconnection Cyprus will cease to be the only isolated energy market in the EU and will be able to import cheap energy from European markets to promote competition and energy security, as well as export electricity based on a very flexible flow reversal system.

EuroAsia Interconnector employees, based on research, firmly believe that Cyprus has every reason to become an electricity exporter, which will be produced at a very low cost from renewable energy sources and will be sent to European buyers. The functioning of the interconnector will allow a significant increase in the production of electricity from photovoltaic, even if until then a cheap energy storage is developed or the ΑΗΚ network is upgraded.

A key pillar of the concept of interconnection with the European grid, which the EU is also aware of, is the operation of the Euro-Asian interconnection for the benefit of Greek Cypriots and Turkish Cypriots, either as producers and exporters or as consumers.

The total cost, taking into account the recent surge in energy prices, is estimated at about 1.7 billion euros. Additional financing agreements have already been signed, including from the European Investment Bank (EIB).